The Jews of Northern California and San Francisco

A selection of uncommon and not so uncommon books and ephemera illuminating various aspects of Jewish communal life in Northern California. Earlier on in my bookselling career I made a more significant effort to use my business to offer something to the Northern California Jewish community, a community that I settled in now more than thirty years ago. I re-issued the important volume on California and San Francisco Jewry written by Martin Meyer and A.M. Voorsanger, but it never caught the level of interest that I hoped that it would. The Emanu-El crowd whose ancestors were featured throughout the book showed no interest and getting attention to the book from the Jewish Bulletin was like pulling teeth.

(San Francisco and Northern California aren't Brooklyn or New Jersey. Home is somewhere else for most of the Jews here I guess.)

Following the death of Seymour Fromer and the destruction of the Judah Magnes Museum in Berkeley I have to admit my enthusiasm for the pursuit of records of Northern Californian Jewish history declined. Still, when I stumble on an interesting pamphlet or ephemeral piece my enthusiasm does flare up. Below are some new arrivals and some older pieces that have caught my interest recently. All are still available on the Hollander Books website as of this posting, except the last two. Email directly if you are interested in those. 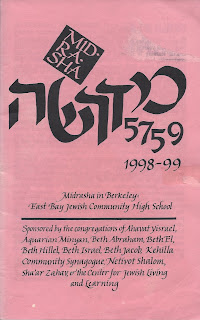 Midrasha 5759 1998-99. Berkeley, California, Midrasha in Berkeley: East Bay Jewish Community High School, 1998. Octavo, stapled paper covers, 42 pp. Softbound. Good. The Annual parent/student handbook for the 5759 school year (22708) The East Bay seems to be much better at communal unity than any other part of the Bay Area. The Midrasha, which is still flourishing, is a good example of a communal success. It provides cross-denominational education for post-Bar Mitzvah teens.  $10.00 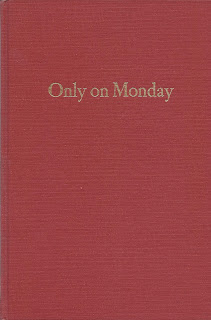 Sloss, Frank H. Only on Monday: Papers delivered before the Chit-Chat Club. San Francisco, Designed and Printed by Lawton Kennedy, 1978. Royal octavo, orange cloth with gold lettering, xii, 144 pp., fold-out illustration. Hardbound. Very Good. Includes "Recollections," by Helen Sloss Luey, "For My Father," by David L. Sloss and "One Word More," by Eleanor L. Sloss. (31630) Frank Sloss was the son of Marcus Sloss and grandson of Louis Sloss. The Sloss and Gerstle families were married into each other and into the Lilienthal families as well as many of the other pioneer Jewish families of San Francisco. Frank was interested in the law and in many other things. This volumes includes twelve papers that he presented to the Chit-Chat Club. This is an elite club limited to twenty-five members at any time. The function of the club is to present a round robin of papers on any subject. This volume was printed designed and printed by Lawton Kennedy who was for decades one of San Francisco's finest printers. He printed some books in his own name but printed mostly special projects for individual and institutional clients.      $30.00 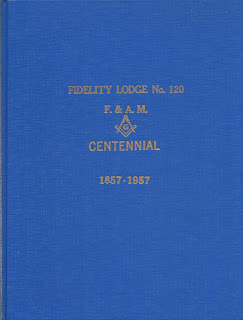 Fidelity Lodge No. 120 F. & A.M. Centennial 1857-1957. San Francisco, Fidelity Lodge No. 120 F. & A.M. , 1957. Quarto, blue cloth with gold lettering, 27 pp., b/w photos. Hardbound. Very Good. This is an original edition with the photos properly printed and not a cheap facsimile. This volume makes no indication that this Masonic Lodge was always largely a Jewish lodge, but the names make that clear. Among the members were Rabbi Jacob Voorsanger, Seixas Solomon and Rabbi Jacob Nieto. (76098)      $18.00 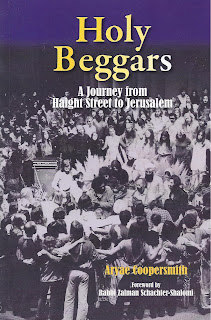 Coopersmith, Aryae. Holy Beggars: A Journey from Haight Street to Jerusalem. El Grenada, California, One World Lights, 2011. ISBN: 9789615414287. Octavo, glossy paper covers, xviii, 396 pp., glossary. Softbound. Very Good. Foreword by Zalman Schachter-Shalomi. Edited by Netanel Miles-Yepez. (76308)  An account of the early days of The House of Love and Prayer from one of Rabbi Shlomo Carlebach's followers who went on to make aliyah and took up Haredi practice.    $9.50 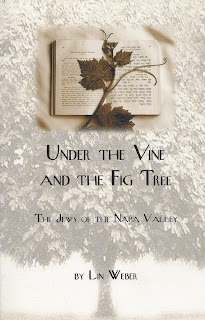 Weber, Lin. Under the Vine and the Fig Tree: The Jews of the Napa Valley. St. Helena, Ca, Wine Ventures Publishing, 2003. ISBN: 0-9667014-4-5. Octavo, glossy paper covers, ii, 198 pp., b/w photos, notes, bibliography, index. Softbound. Very Good. Briefly inscribed by the author. The author and other members of the Jewish Historical Society of Napa Valley contacted me their search for resources on the Jews of Napa Valley. I told them that there wasn't much. They took the trouble to do some serious research and pretty much looked at every possible source.  (76880)      $10.00 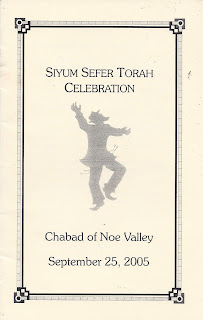 Potash, Gedalia. Siyum Sefer Torah Celebration, Chabad of Noe Valley, September 25, 2005. San Francisco, Chabad of Noe Valley, 2005. Small octavo, stapled paper covers, 20 pp.,  Softbound. Very Good.  (79420)  San Francisco is now graced with at least a minyan of Chabad rabbis. The Potash's outpost in Noe Valley is probably the first organized Jewish presence that has ever existed in Noe Valley. In previous generations Noe Valley was a heavily Catholic neighborhood. However it is now largely another outpost of generic privilege and wealth. The dedication of a new Sefer Torah is always an exciting event. The text of this pamphlet includes the prayers for the ceremony held in honor of the occasion which is in Hebrew and English.     $15.00 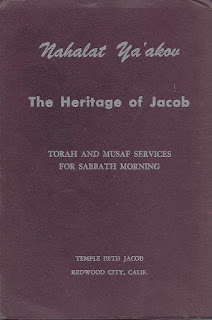 Hirschberg, Harris H., arranged and translated by. Nahalat Ya'akov: The Heritage of Jacob. Torah and Musaf Services for Sabbath Morning. Redwood City, California, Temple Beth Jacob, 1955. Duodecimo, stapled paper covers, 40 pp. Softbound. Good. Text is in Hebrew and English. (79485) This small volume was created for use in the youth services and for the congregation on days when a Bar Mitsvah occurred (apparently Bat Mitsvah was still a thing of the future at Beth Jacob in 1955). Beth Jacob is the oldest synagogue on the peninsula between San Francisco and San Jose. It began as a minyan meeting in members homes in 1930. It was a traditional congregation that affiliated with the Conservative movement in 1957, two years after the issuance of this small prayer-book. It is still an active and flourishing congregation today. See below for a few other items related to this congregation.  $15.00 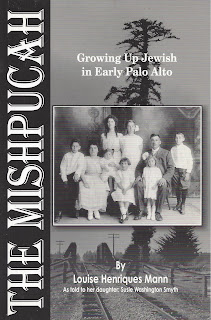 Mann, Louise Henriques, As told to her daughter: Susie Washington Smyth. The Mishpucah: Growing Up Jewish in Early Palo Alto. Palo Alto, California, Saturna Publishing, 2003. ISBN: 0-9733752-0-5. Octavo, glossy paper covers, 191 pp., b/w photos, geneological charts. Softbound. Very Good. Signed on the title page by Louise Mann. (79486)  This account is not particularly well organized and it is much more a personal history than a history of Palo Alto Jewry. Nevertheless it is, at best, one of the only accounts of Jewish life in Palo Alto in the first quarter of the 20th Century, if not the only one. There are a good number of illustrations. Probably a vanity press publication.     $22.50 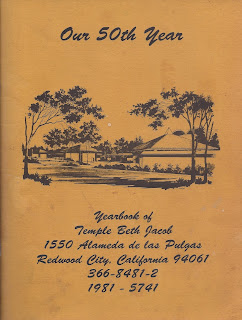 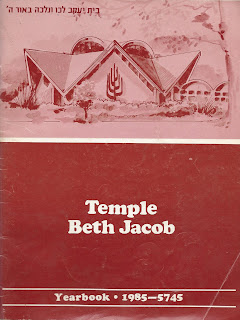 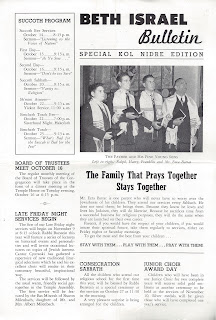 Beth Israel Bulletin. Special Kol Nidre Issue. San Francisco, Congregation Beth Israel, 1951. Royal octavo, paper covers, 6 pp., b/w photos, horizontal and vertical creasing. With excepts from Rabbi Elliot M. Burstein's Rosh Hashanah Eve sermon and with the transcript of a speech by the congregational president Ben Blumenthal. Congregation Beth Israel was located near the corner of Fillmore Street and Geary Boulevard near the center of what was still a Jewish area of San Francisco. The early fifties was a good time for the congregation but in the 1969 under pressure from white flight and the predations upon the neighborhood at the hands of the redevelopment agency the once mighty Beth Israel merged with a small Reform congregation on Brotherhood Way at the edge of San Francisco.  The modest building located there, adjacent to the Hillel Day School (formerly Brandeis-Hillel Day School) continues on without fanfare. Apparently the building was rented out a few times for rock show in 1966 and 1967. The magnificent building on Geary Boulevard was later acquired by Jim Jones' People's Temple. After the horrifying end of the Jones cult the building was mostly occupied. In the late 1980s it was purchased by designer Tony Duchatte who spent significant time and effort to renovate the building in order to turn it into some kind of artistic Christian shrine. The building along with all of his work was destroyed by fire in the 1989. Truly, it had been cursed.
The cover photo of this issue of the Bulletin features a photo of Ezra Battat with his three sons, Ralph, Harry and Franklin, over an article entitled, "The Family That Prays Together Stays Together." Ezra Battat remained concerned with youth education throughout his life and was a benefactor of the Board of Jewish Education. (For more on the BJE, see the next item below).  $20.00 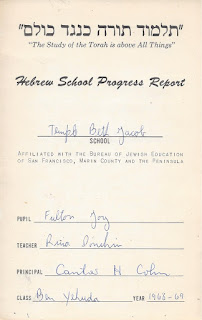 Hebrew School Progress Report. Temple Beth Jacob School.  Octavo, 4 pp. Redwood City, California, Congregation Beth Jacob, 1968-9. At this time the Bureau of Jewish Education of San Francisco, Marin County and the Peninsula was a well run enterprise and provided strong support for congregational supplemental school education. This report card, issued by the BJE for use in all synagogue schools is just like a real school report card. Clearly at that time it was still possible to have clear educational goals and measurable standards of success. This report card has grades (good ones) and teacher comments. Sadly, today, neither parents not students are this serious about Jewish education. The BJE has been oddly renamed and no longer has any authority over what goes on at any synagogue supplemental schools.  $15.00.