Let's start at the end. Like most people I have a weakness for big round numbers. After many years of cataloging I recently reached the item number 80000. The book is a recent academic book in English. My price is a fraction of the retail price and if you want another copy you can probably find a copy on Amazon (evil made manifest, may God take them) or on some other website that Amazon controls or has not yet bought solely to present a case that they don't completely control every aspect of the book trade. At this point in my career I'm easing my way out of the business of selling English language books (and other fool's errands), but in addition to a weakness for big round numbers I also have a weakness for really good books and I do actually care about what's in them. 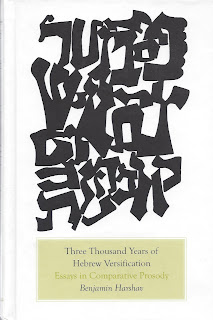 Benjamin Harshav, z"l, was born Binyamin Hrushovski in Vilna in 1928. As he described it the family lived above the publishing house B. Kletskin. He learned Hebrew and Yiddish in that great city. He parents were both educators at the Sofye Gurevich Secular Yiddish School. His mother took over the school from Gurevich herself. Moyshe Kulbak was a teacher in the school. He was friends with the young Weinreichs who lived next door to Zalman Reisen. His parents were friends with Sutzkever, Manger and Grade who all spent time together. Max Weinreich had young Binyomin in his sights as a future Yiddishist from birth and had fate not destroyed the Vilna Jewish community Harshav certainly would have been a leader of it in his generation.
The family survived the Holocaust by fleeing to the east with great incident and arrived through great good fortune. It was there that they remained through the war. He studies Mathematics and Physics at Orenberg State University. After the war they made their way to the DP camps in Germany. Before leaving Germany for Mandate Palestine on the last illegal Zionist vessel Harshav published his first book of poetry in Yiddish, Shtoybn (Munich, Merkaz "Deror" in Daytshland, 1948). In the newly independent state of Israel he became on the the many fresh faces thrown into uniform.
I don't know much about how Harshav transitioned into Israeli society and how he went from Mathematics and Physics to Yiddish literature. At that time he became associated with a number of younger poets who would go on the very successful careers, among them Yehuda Amichai and Dalia Ravikovitsh.
His first published academic article "On free rhythms in modern Yiddish poetry," appeared in the first volume of The Field of Yiddish, in 1954. In 1960 a book on Hebrew literature of his was published and he participated in a book of translations of Aaron Glantz-Leyeles into Hebrew together with Dov Sadan and Shimshon Meltzer. Although Harshav continued to publish poems in Yiddish and Hebrew (under pseudonyms) his primary work became the study and translation of Yiddish into Hebrew. He edited one of the great anthologies of Yiddish literature in any language, A Shpigl oyf a Shteyn Antologye. Poezye fun tsvelf farshinitene yiddishe shraybers in Ratn-Farband, together with Chone Shmeruk, Sutzkever and Mendel Piekarz.
In 1967 he founded Department of Poetics and Comparative Literature at Tel Aviv University. One of his first projects at Tel Aviv University was the founding on the journal "Ha-Sifrut."It was immediately a central journal for literary studies in Israel. The journal ran until Harshav left Israel for the US in 1986.
His first book published in English, Structuralist Poetics in Israel, a collaboration with Ziva Ben-Porat, was published in 1974. In 1979 Harshav established the academic journal "Poetics Today," in order to serve his interest in theories of versification. (The festschrift in honor of Harshav was published three issues of the still running journal in 2001).
Barbara Harshav, a historian and translator began working with Yad Vashem between 1978 and 1986. She came from a typical American Jewish background of her time and became multi-lingual through talent rather than environment. In 1986, together with her husband (and with additional assistance from Kathryn Hellerstein), they did the translations for the massive bilingual Yiddish-English anthology American Yiddish Poetry. That year both took posts on the faculty at Yale University and moved to the United States. They worked on many translations into English including the work of Yehuda Amichai, Avraham Sutzkever, Shmuel Yosef Agnon, Menke Katz. On his own Benjamin Harshav completed translations of Marc Chagall and of vital significance, Herman Kruk's The Last Days of Jerusalem of Lithuania: Chronicles from the Vilna Ghetto and the Camps, 1939-1944.
After her return to the US Barbara Harshav became a very successful translator into English of texts from French, German, Hebrew and Yiddish on her own.
On his own Benjamin Harshav continued to write Yiddish poetry, publishing a new collection in Take oyf tshikayes: geklibene lider in 1993/4. He continued to publish translations into Hebrew from Yiddish. Among the writers he worked on are Jacob Glatstein and Glantz-Leyeless. In the field of Hebrew literature he continued to write about specific authors like Avot Yeshurin and Uri Tsvi Grinberg. He continued his work on Hebrew versification. This brings us back to Three Thousand Years of Hebrew Versification: Essays in Comparative Prosody, item number 80000. Seen in the grand sweep of his career this volume seems to be an attempt to gather and offer up the best version of a life's work in literary theory. The volume is the last one published by Harshav.
To see a nearly three hour oral history conversation recorded with Benjamin Harshav by the National Yiddish Book Center take a look here. The full video is in Yiddish but there are some highlights which have been captioned in English.

Below are a few more Harshav items available from my stock: 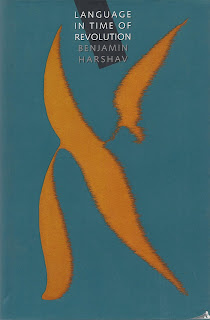 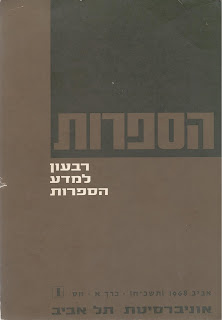 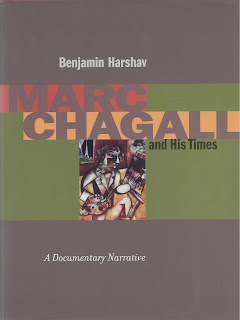 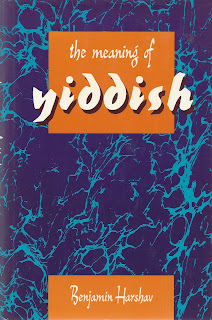 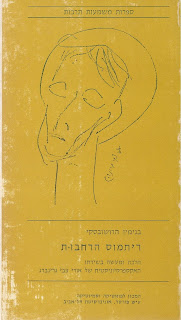 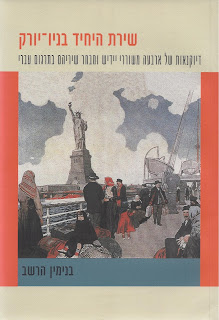 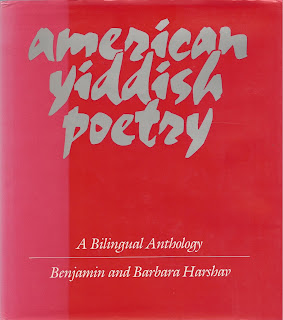 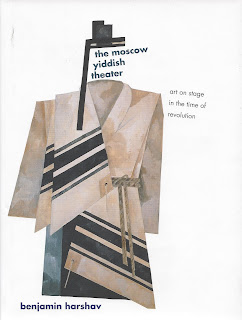 END
Posted by Henry Hollander, Bookseller at 6:00 PM No comments: