Jewish Music, Musicians and the Jewish musical milieu: A selection

A selection from our rather extensive collection of items of and about Jewish music. 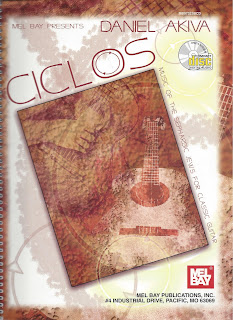 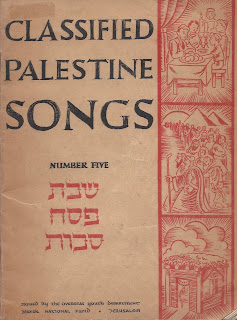 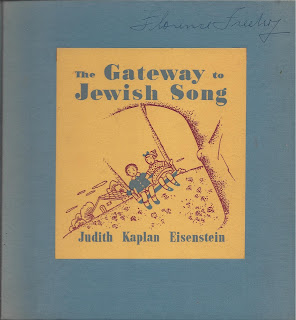 Eisenstein, Judith Kaplan. The Gateway to Jewish Song. New York, Behrman House, Inc., Publishers, 1939. Oblong royal octavo, blue cloth covered boards with paste-down illustration on the front board, previous owners penned name over the illustration, some toning to the end-paper, frontispiece drawing, x, 172 pp., b/w drawings by Temima Nimtzomwitz, translations of the Hebrew songs. Hardbound. Good.  (73582) Eisenstein is more than a famous daughter and a famous wife. This is only one of many books of Jewish music that she authored or contributed to. The copy illustrated above belonged to Florence Freehof, a prolific author of Jewish children's books and a member of a noted family of the Reform movement.     $20.00 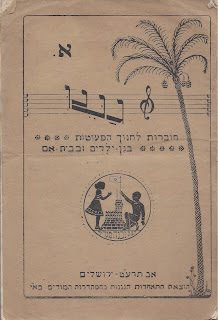 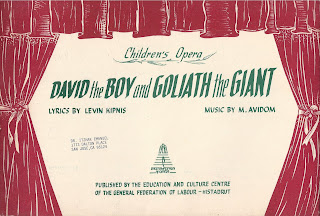 Kipnis, Levin. Music by M. Avidom. David ha-na'ar ve-Golyat ha-anak/ David the Boy and Goliath the Giant. Children's Opera. Tel Aviv, Education and Culture Centre of the General Federation of Labour - Histadrut, 1958. Oblong octavo, stapled paper covers, 16 pp., musical notation throughout. Softbound. Very Good. Text is in Hebrew and transliterated Hebrew. The Nissimov Music Library no. 106. (73721)  Kipnis was an outstanding author for children first in Yiddish and then in Hebrew. Here his work appears in Hebrew and in English translation. Kipnis composed many short plays for children. This is only one of several similar titles I have in stock. $25.00 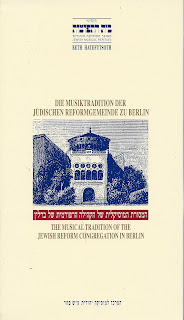 The Musical Tradition of the Jewish Reform Congregation in Berlin/ Die Musiktradition der Jüdischen Reformgemeinde zu Berlin/ Ha-Masoret ha-musikalit shel ka-Kehilah ha-Reformit shel Berlin. Israel, Beth Hatefutsoth, The Feher Jewish Music Center, 1997. Tall narrow octavo, paper covers, 65, 31 pp., a few b/w photos. With two musical CDs in Jewel Boxes, all in a paper slip-case.  Softbound. Very Good. Text is in English, German and Hebrew. (70076)  This music, recorded between 1928-1930 represents a tradition that had evolved in Berlin over the previous century. Included in the booklet are the German texts and English translations of those texts. I doubt that there is any place where more that a stray one of these melodies is still in use.  $40.00 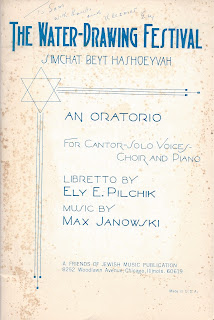 Pilchik, Ely E., libretto by. The Water-Drawing Festival: Simchat Beyt Hashoeyvah. An Oratorio For Cantor-Solo Voices-Choir and Piano. Chicago, Illinois, A Friends of Jewish Music Publication, 1970. Royal octavo, foxed stapled paper covers, 88 pp. Softbound. Very Good-. Music by Max Janowski. Inscribed by the librettist on the front cover. (48694) Simchat Beyt Ha-sho'evah was a festival occurring at the end of Sukkot in late Second Temple times. There has been some gestures towards revival lately. The Oratorio and Cantata were very popular forms particularly in the Reform Movement in the during the first two thirds of the last century. Both are pretty dead at the moment but it is hard to develop a full picture of what Reform judaism was like in America without any familiarity with these forms. Pilchik was a well known Reform rabbi and author of Torah commentary and creative writing. Janowski was a prolific composer of liturgical music for the Reform movement as well as a prominent Jewish Chicagoan.     $35.00 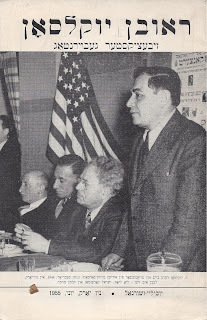 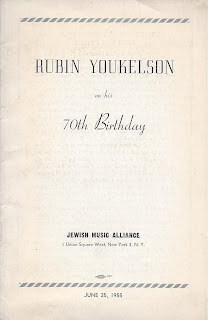 Re'uven Yuklson: zibetsikster geboyrntog. Yuvilei-Zshurnal, Yuni, 1955./ Rubin Youkelson on his 70th Birthday, June 25, 1955. New York, Jewish Music Alliance, 1955. Octavo, stapled paper covers, 32 pp., b/w photos. Softbound. Very Good. In Yiddish and English. Joseph Rumshinsky and Isaac Leib Peretz were both involved in the founding of secular Yiddish Folk Choirs in 1899. The tradition of liturgical choirs extends back to the period of the the First Temple but secular Jewish choirs were a new innovation. By the 1930s there were nearly two hundred Yiddish folk choirs in the US alone. The Jewish Musical Alliance was an co-ordinating agency that distributed musical arrangements for choirs. Jacob Shaefer is one of the best known figures of that organization. Youkelson was more involved in the organizational aspect of the Alliance. (66588)     $30.00 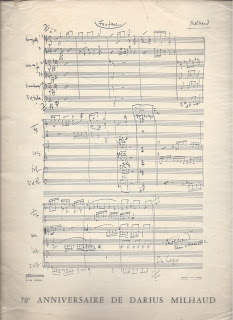 The Hollander Books stock is full of small unknown pieces of Jewish history. Included below are a variety of Haggadot quite unlikely to be on the bookshelf of even the fanatic book collector. Making "Discovery," easier is one of the promises made of online book catalogs and databases. The items below are just the sort of items that these kinds of "discovery" fail to distinguish from others even when they pop up in results. Real bookstores and libraries will always be better than online ones. 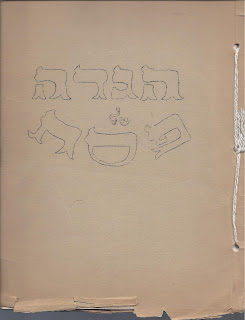 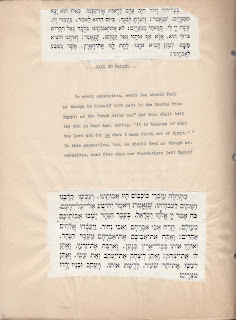 Hagadah shel Pesah. No place, no publisher, no date, c. 1950. Quarto, string-tied edgeworn paper covers, 17 single-sided pp., mimeographed with sections pasted in from secondary sources. Softbound. Good. Text is in English and Hebrew. Dated on the basis of the printing technology and the contents. The sources of the text are pulled together without attribution and are not recognizably specific. The text does not include the full traditional text but does include a Yiddish poem by Warshavski, as well as another (unattributed) entitled, "In Varshever Geto in Hoydesh Nisn." The blessings are absent. Looks socialist to me. (73451)      $20.00 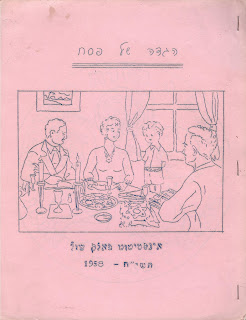 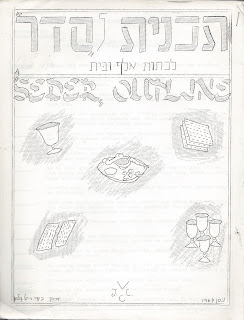 Goldman, Rachel, prepared by. Tokhnit Seder le-Kitot Alef ve-Bet/ Outline for the Aleph Class Seder. North Hollywood, California, Valley Jewish Community Center and Temple, 1964. Quarto, stapled paper covers, 12 mimeographed singles sided pp. , b/w drawings by Rahel Goldin. Softbound. Good. Text is in English with some Hebrew. A play for the students to perform at the school getting ready for Passover. Worked up from The Passover Haggadah, by Gutstein. (73457)     $20.00 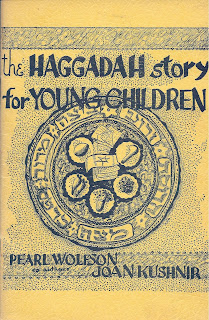 Wolfson, Pearl and Kushnir, Joan. The Hagadah Story for Young Children. Denver, Colorado, The Authors, 1953. Octavo, stapled paper covers,  21 pp., b/w drawings. Softbound. Very Good. Signed by the authors on the title page. Nicely illustrated in fifties style. By young children I hope that they meant at least eight-year olds. Not sure why the songs at conclusion of the seder aren't included as I imagine young children would enjoy them. (30573)     $15.00 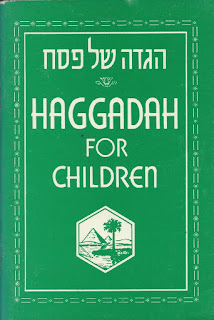 Rudin, Jacob P., prepared by. The Haggadah for Children. New York, Bloch Publishing Co., Inc., 1948 [1975]. Later printing. Duodecimo, stapled paper covers with mild wear to the spine, 44 pp., b/w drawings by R[euben] Leaf. Softbound. Very Good-. In Hebrew and English on facing pages. A quick trip through magid, nice illustrations to do with the story of the escape from Egypt. A lengthy section of songs with all of the music. This is more like the children's seder I would want to be at. Reuben Leaf is an under-appreciated talent in both his illustration and his lettering work. Probably the most likely of these Haggadot to be found again.(10016)      $20.00 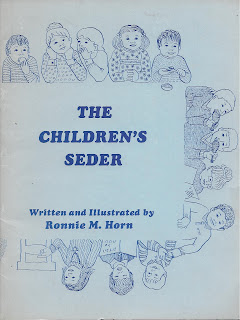 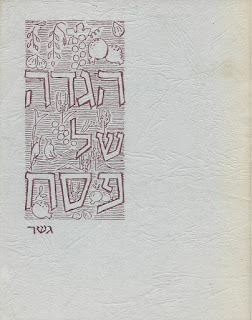 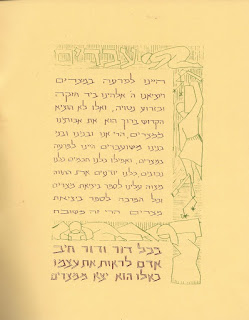 Hagada shel Pesah. No place, Gesher?, 1970s. Octavo, stapled paper covers, 28 pp., in a calligraphic hand and with illustrations that match the calligraphy in style of line. Softbound. Very Good. In Hebrew (30577)  A very nice integration of text and illustration. No specific indication of the author/artist/creator. That the text is entirely in Hebrew is an indication that the source is somewhere in Israel. The dating is based on the quality of the printing.   $25.00 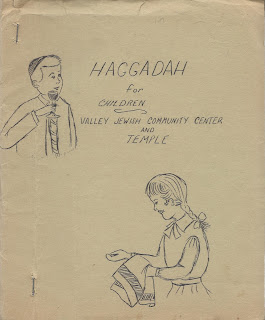 Haggadah for Children. North Hollywood, California, Valley Jewish Community Center and Temple. Religious School, c. mid-1950s. Octavo, stapled paper covers, mimeographed sheets, 29 single-sided pp. Softbound. Very Good. Text is in English and Hebrew. "...adapted from the 'Haggadah for Young People' by Martha Marenhof, with several ideas introduced by Rabbi Aaron M. Wise." Compared to the other item in the list from Valley Jewish Community Center and Temple this item is rougher in the quality of illustration and in the execution of manufacture. (73447)     $25.00

Posted by Henry Hollander, Bookseller at 8:50 PM No comments: