An oddity - Not quite Judaica, but close. King Solomon's "first" Temple by E. Cromwell Mensch.. 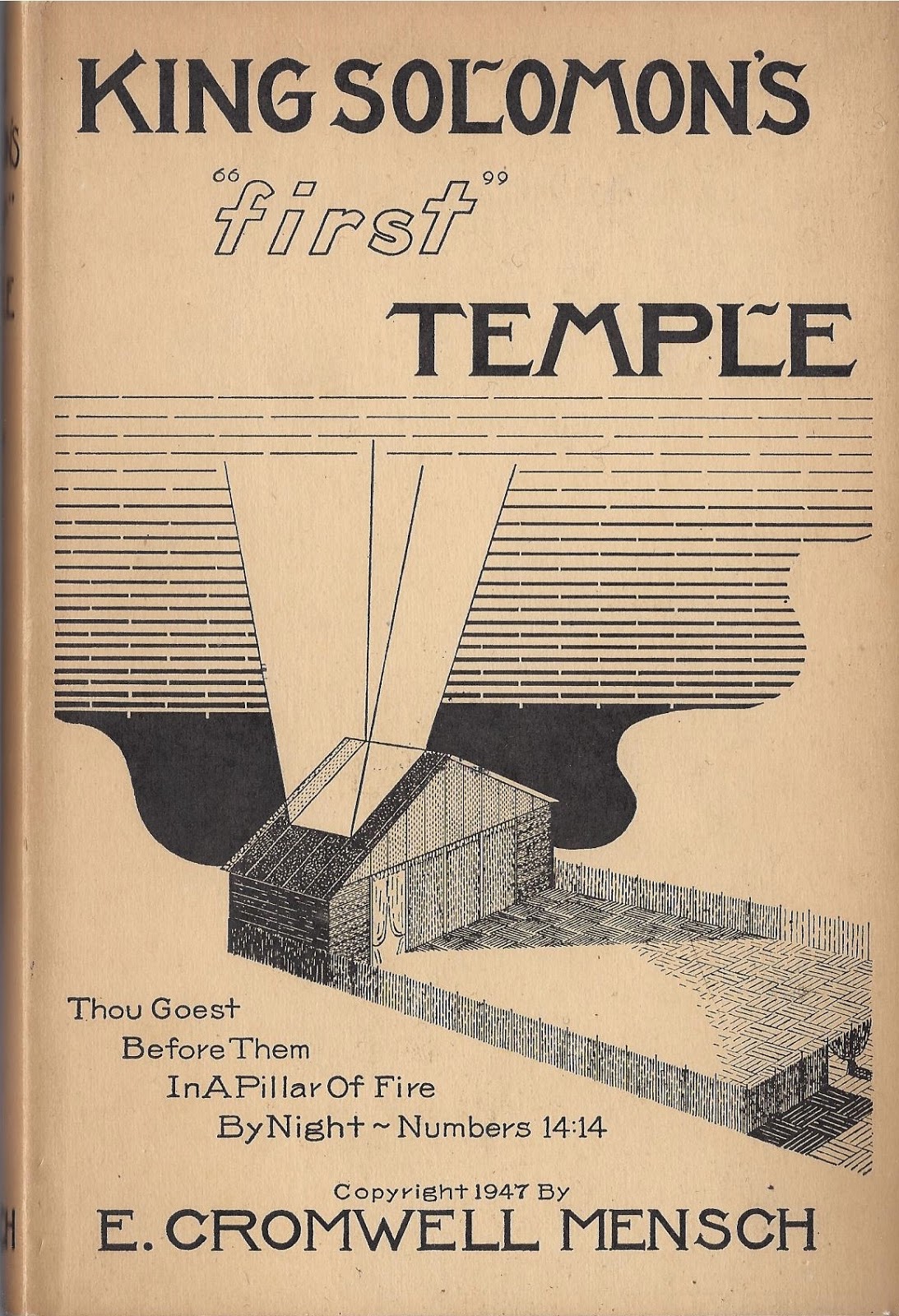 What I am willing to call a Jewish book is very broad-minded and "ecumenical." However, periodically one of my book scouts or fellow book dealers bring me a book that is a coukoo's egg. There are some odd Christian items that seem Jewish like the anti-Semitic works of David L. Cooper, the bible study material of the old Jehovah's Witness movement or various works of the British Israelite movement.  King Solomon's 'first' Temple, falls into yet another genre. As the author says on the front flap, "It has to do with the planning and building of the original House of God, which still stands today after some 3,200 years. The story was written by Moses, and the House was planned in collaboration with Amalek, the architect. The project dealt with an entirely new conception of God, a thesis so radical for its day, it violated all the rules of Orthodoxy."
In the preface the author states:
"The conception of this book was the outgrowth of a research in the origins of secret societies. The most intriguing part of that research was the discovery of a legend to the effect that Sir Francis Bacon [what is a secret society/ conspiracy theory without Bacon] had founded such an order. In the same bracket of time is found the Hampton Court conference of King James I, of England. From this conference evolved the revision of the text of the Bible, which is now known as the King James' version. The coincidence in point of time with the Hampden Court conference imposed the enigma of whether the legendary existence of Bacon's society was actually founded in fact. If it did have a factual existence the question then became one of what passage of the Bible Bacon fastened upon to build his secret society.
In seeking for a solution, the most logical passage seemed to be one centering around the building of King Solomon's Temple. Solomon sought to build into his Temple a cloak of permanency which he believed Moses had only temporarily attained in his tabernacle. Further research dictated the discarding of the Temple in favor of the tabernacle...
... To that end, each page of manuscript was measured out to fifty-two lines, and the right hand margin justified on the typewriter. Once the page was thus measured and spaced, any editing would have thrown such an arrangement out of balance with the sequence of the drawings."

In addition to Francis Bacon the King James translation of the Bible is another odd obsession. It is widely believed in some Christian circles that the King James version is the only acceptable English translation of the [Christian] Bible and insists on the various mistranslations that have generated subsequent theological ideas and practices. Our author seems to have a diametrically opposed obsession, believing that the King James is hiding something.
Another idea that sometimes comes my way are items promoting the African Origin of Civilization. It is an idea that certainly has strong archaeological support. However, Oldevai Gorge and the Nile Basin are different places. There is an idea that the Egyptians of the great age of the pharaohs were a dark skinned people whose great wisdom was hidden, stolen or lost. While it certainly is a possibility that there were dark-skinned Egyptians the painted ceramics of the time indicate a more multi-racial society. The publications that I have picked up that promote this view relied on Rosicrucian and Masonic sources for the most part. Both are themselves "secret societies," though very slightly by comparison with the conspiracy that Mr. Mensch feels he has discovered. Below are a couple of images in the section of  King Solomon's 'first' Temple that discussed the Egyptian aspect of the "truth." 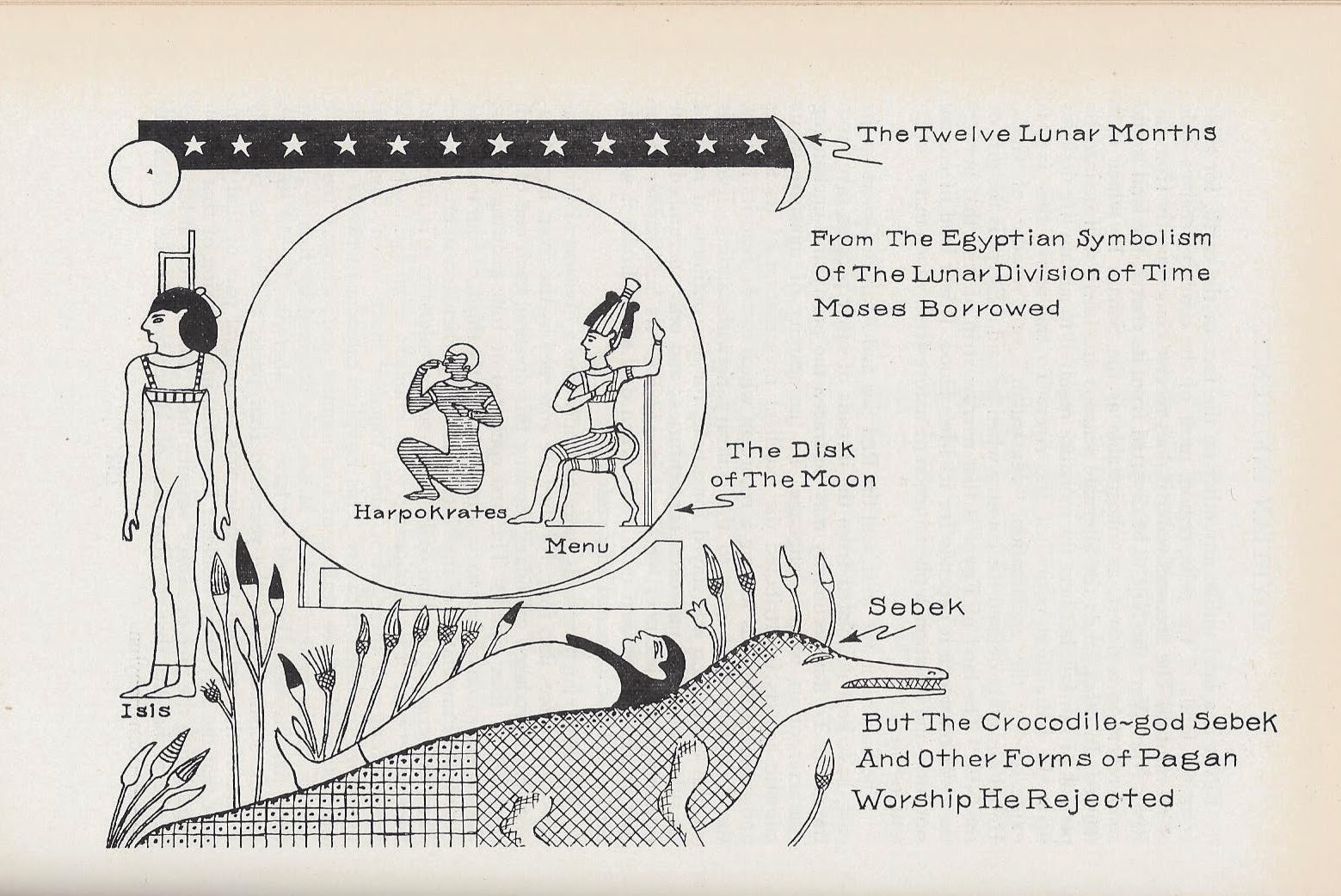 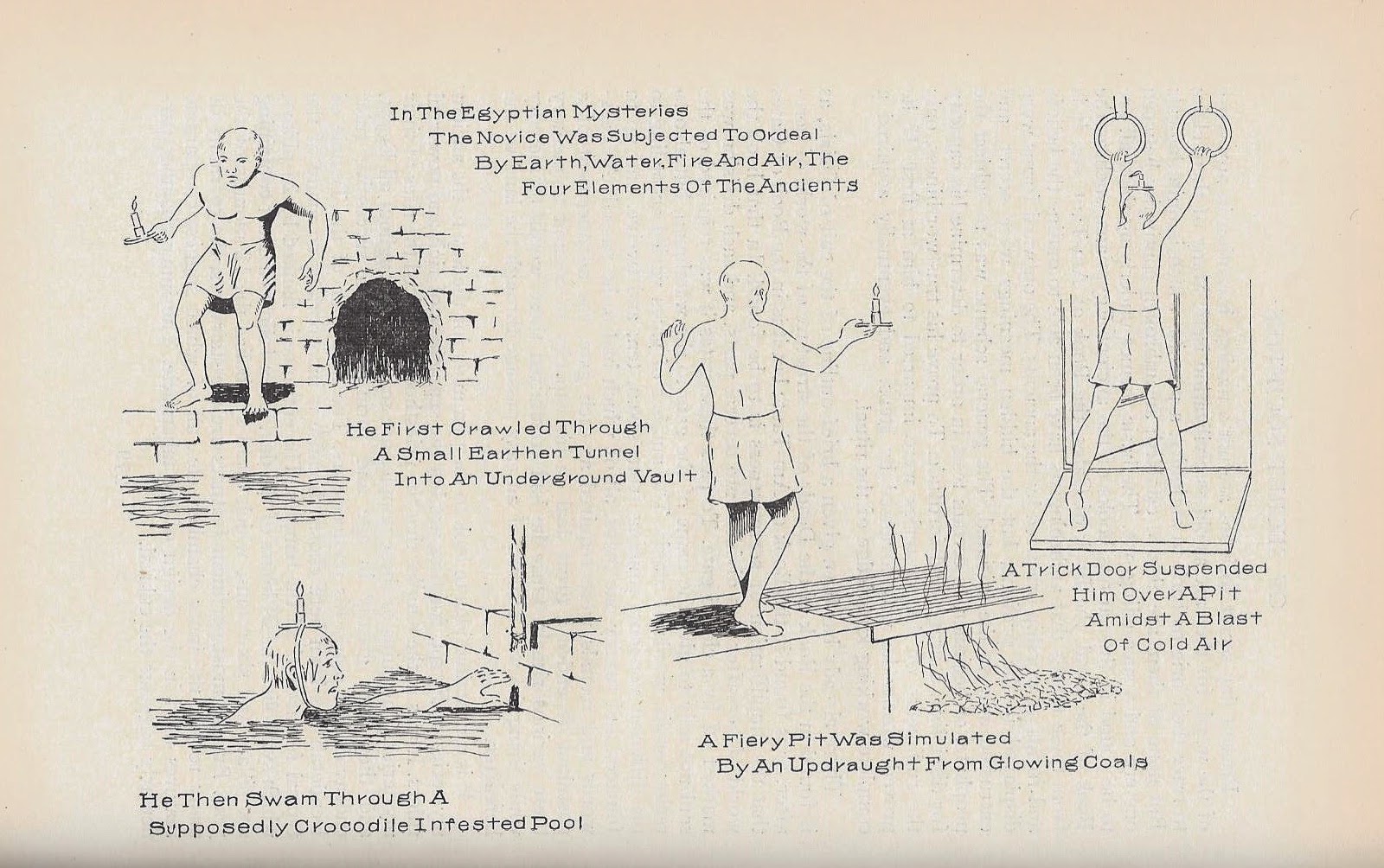 I have to admit that I personally believe that there is a possible mystical reading of the Torah portions that describe the dimensions of the Mishkan and the methods of construction. As the Mishkan is God's home address here on earth I do believe that it is important to try to make as much as can be made of these parts of the Torah. Our author, picking up on the idea that the Mishkan is the center of holiness on earth and extrapolated from this the larger universe emanating from that spot. Below are a couple of the many images that deal with that aspect of his theory. 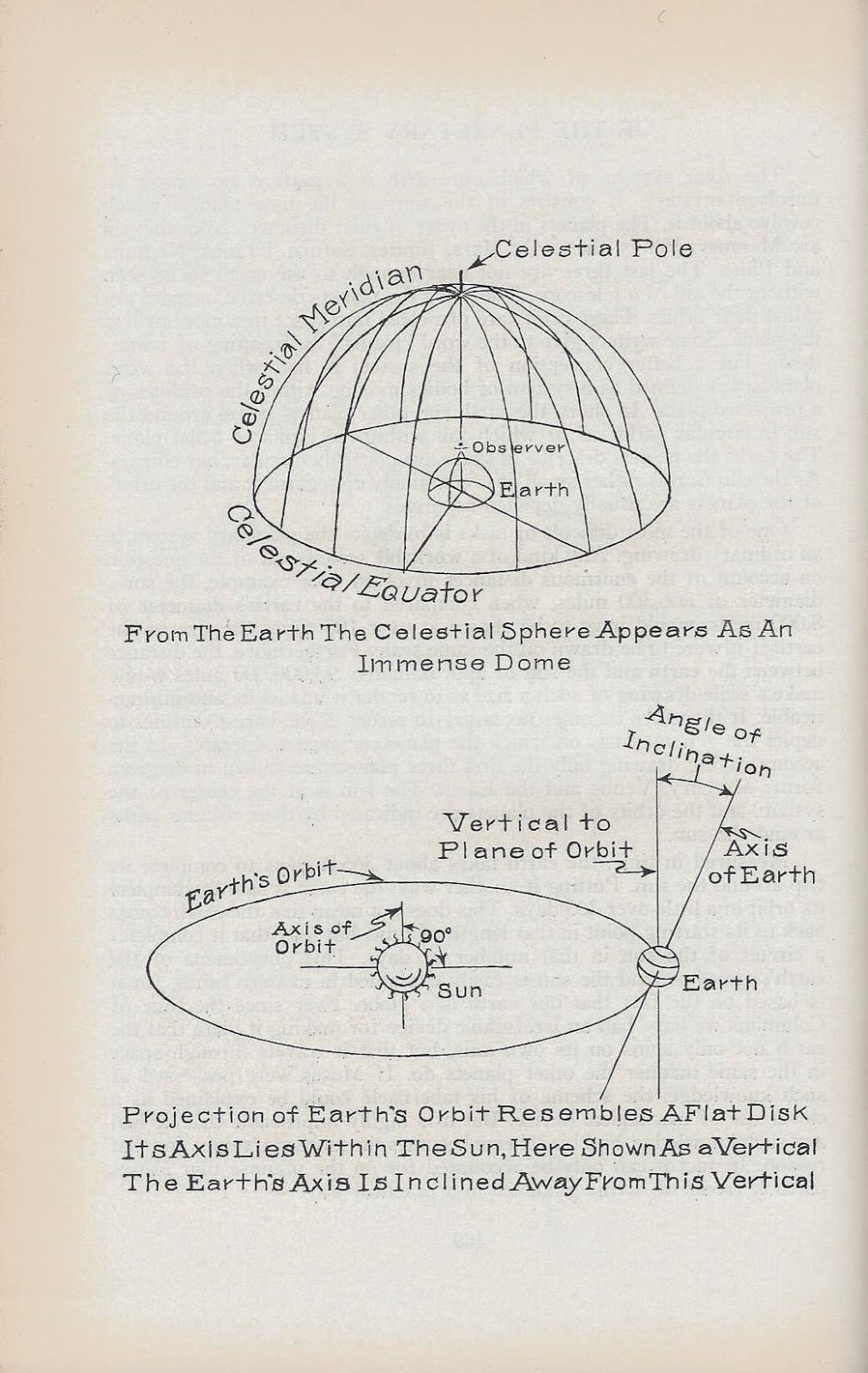 Another hobby horse that comes into play is American Spiritual exceptionalism. This is a bit like British Israelism, but considers the nation special rather than just the leaders of the nation. Below are a couple of images relating to that. 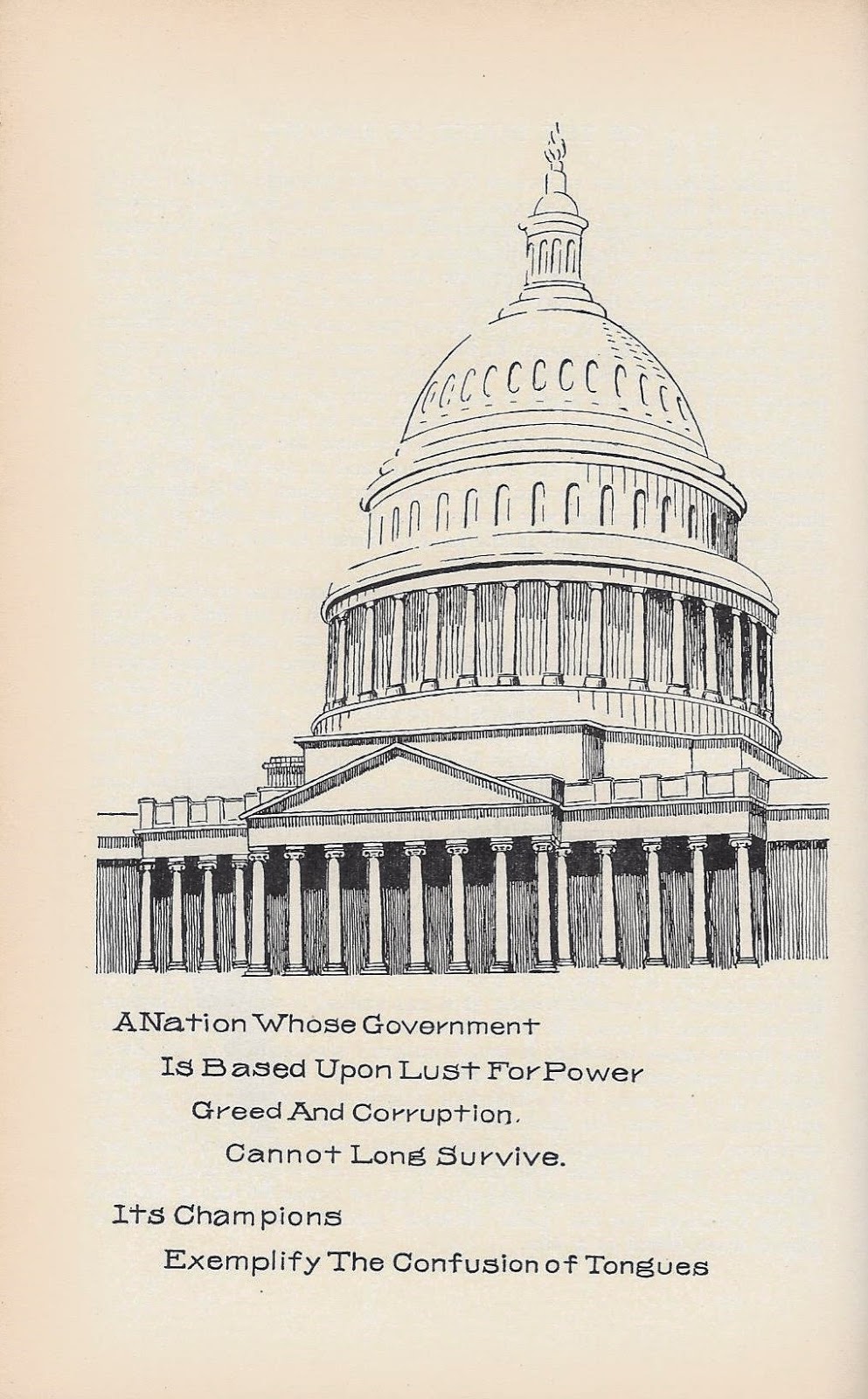 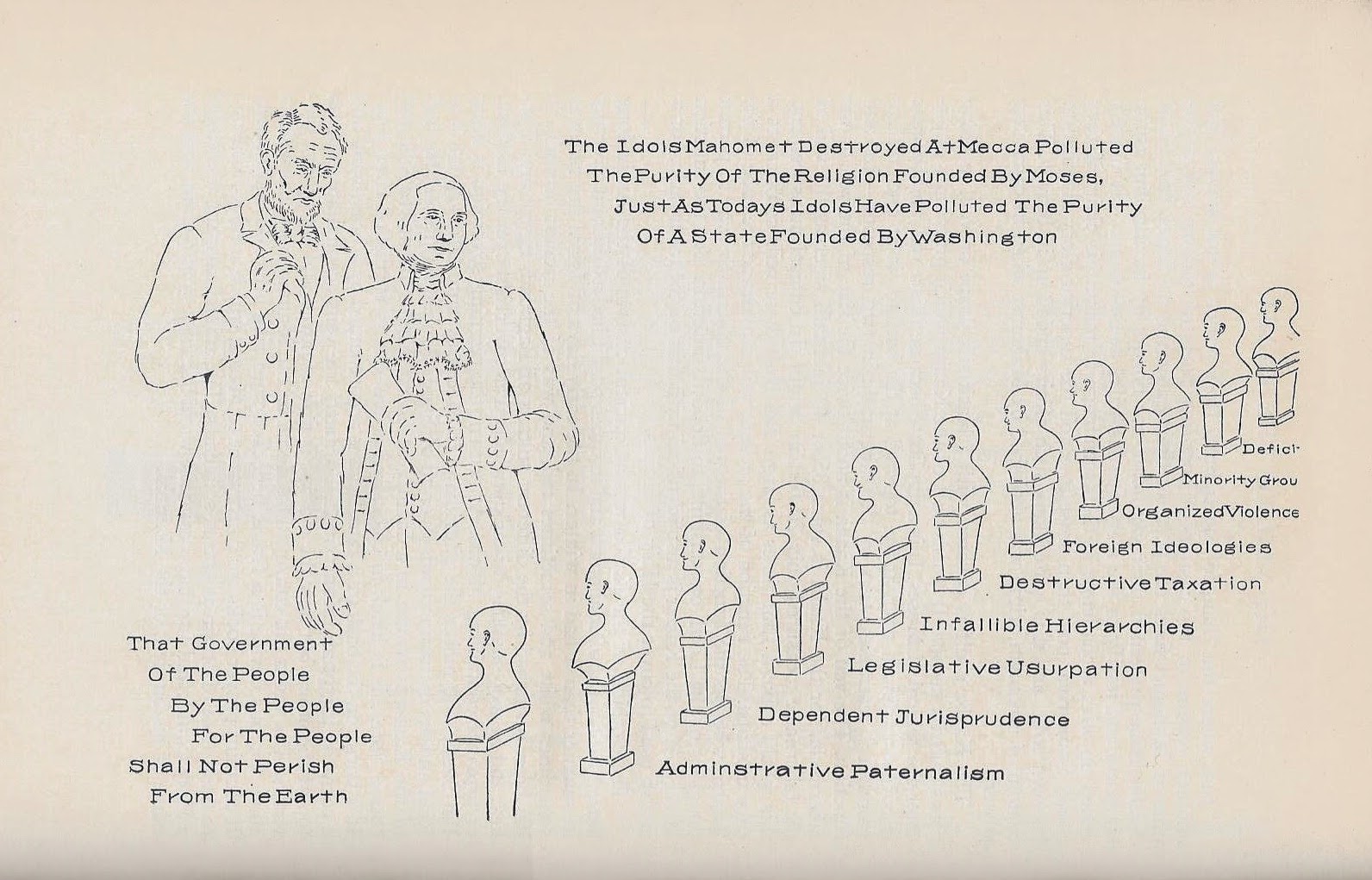 In a very convoluted theory that includes the idea that the Israelite journey in the desert really had Mecca as its destination the author finds that the truest temple is actual the complex around the Kabba stone in Mecca and the stones themselves are the true tablets of Moses. Though aware of the Dome of the Rock, the author 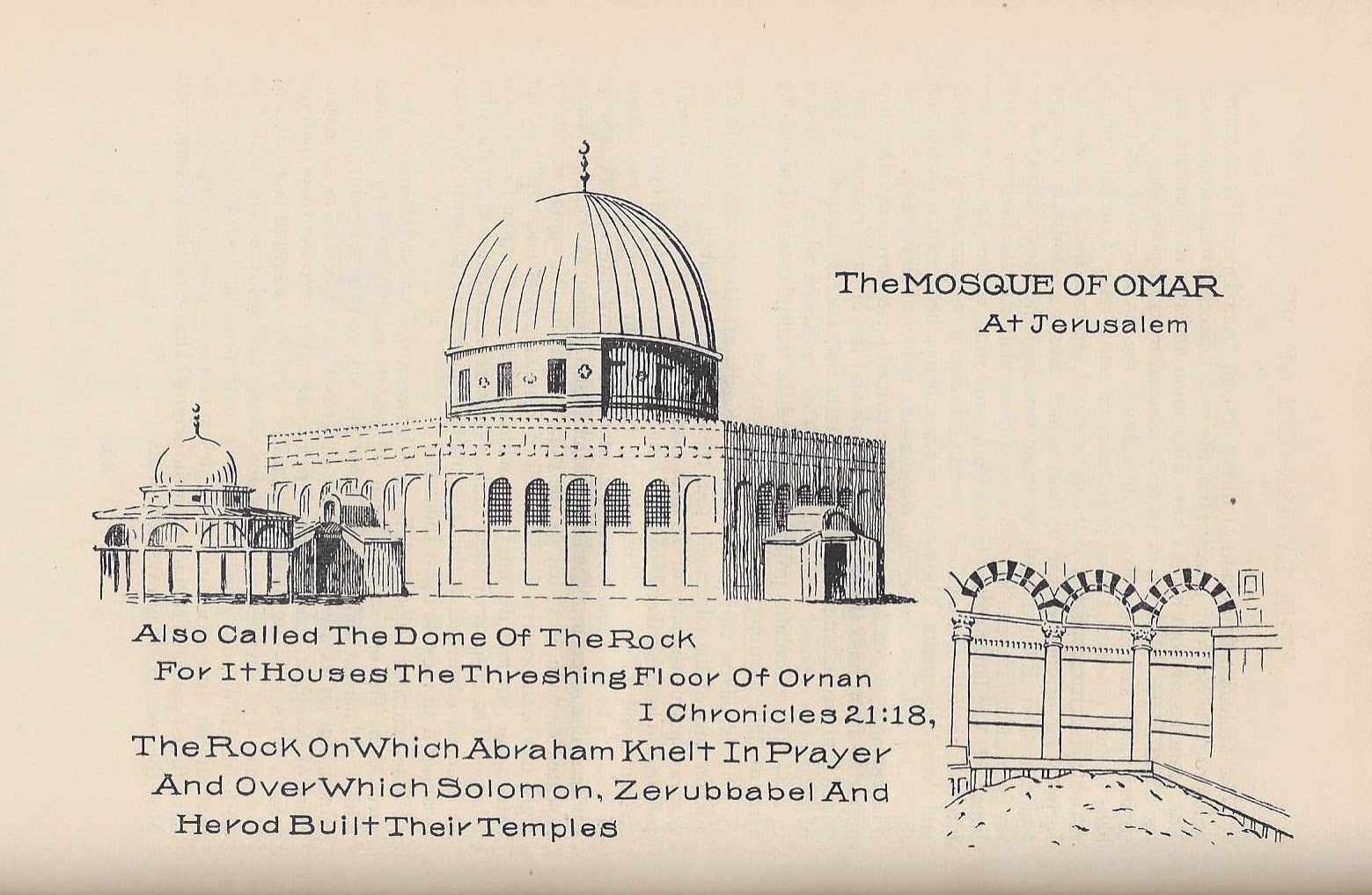 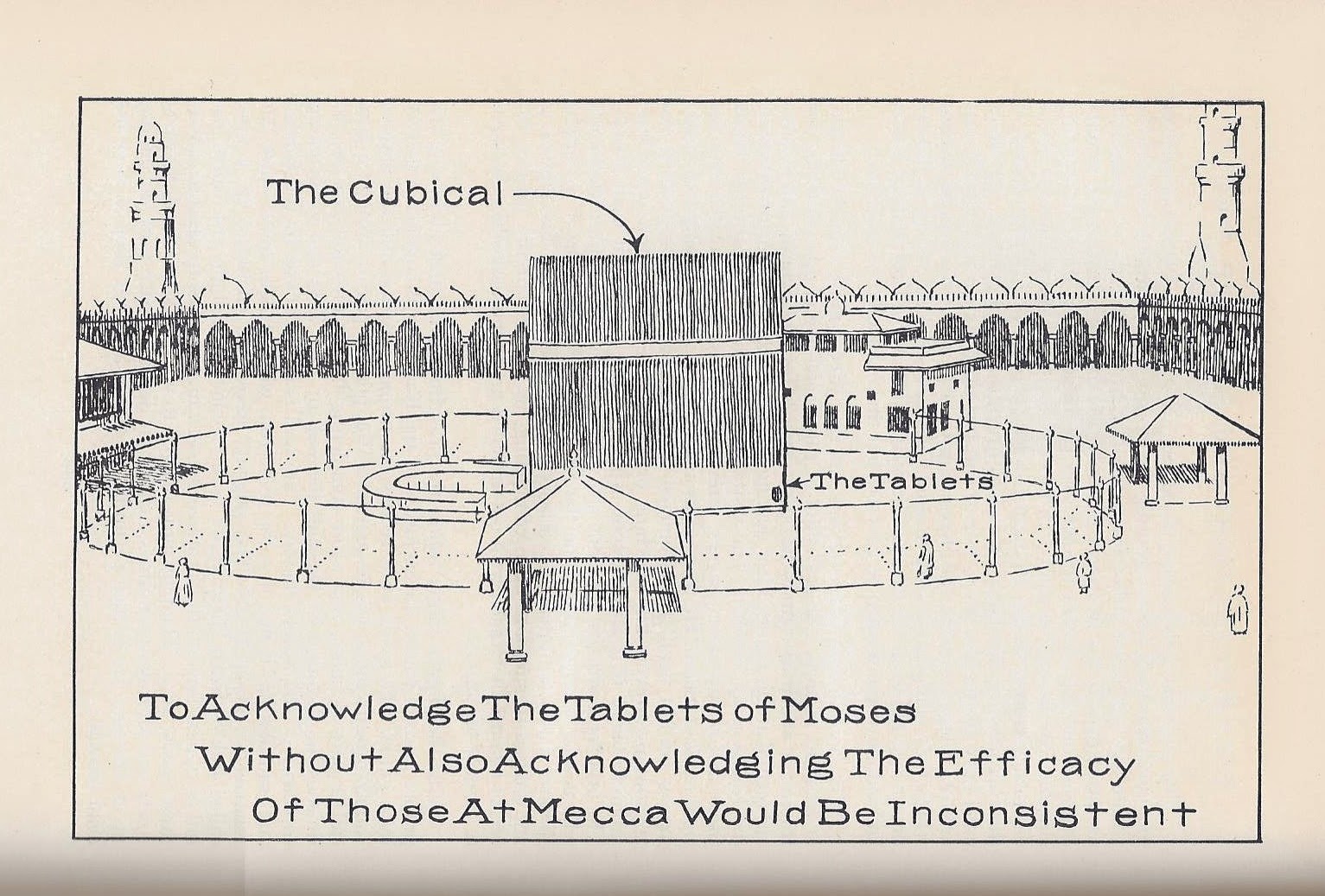 focuses the vast majority of his energy on the Kabba stone. The location of the Kabba stone, the author believes, goes back the full 3,200 years he discussed. Thus the "Temple" there is the real temple and in fact does still exist. Our Menschlikh author believes that all of the faiths have done their part to bring the benefits of a true understanding of God to light through their attempts to manifest it architecturally here on earth. He believes that Jesus had the greatest spiritual understanding of the House of God, but that the residents of the Arabian peninsula had the correct location and ultimately built the best iteration of that House here on earth.
The author is a bit obsesses with cubes and appears to have fallen pray to another more common bug-a-boo. He seems to believe that is is impossible that spiritually the Jews could have gotten it right. This notion, such a mainstay of Christian theology, was doctrine of the Catholic Church into the 1960s. The Higher Criticism is the ax that Protestantism wielded against the belief that Jewish tradition was special, genuine or "authentic." The author's name appears to be an obvious pseudonym. But perhaps I'm wrong. The author's other works that I have located are: The Golden Gate bridge: a technical description in ordinary language; San Francisco Oakland Bay Bridge: a technical description in ordinary language, and Alcatraz. However, the generally positive approach of the author to all of the faiths he discusses seems to me to fit well with the open-minded atmosphere of San Francisco where that book was published and where it was also sold and purchased by a reader. We can see on the rear endpaper the bookseller's ink stamp on the rear endpaper. This copy of the book was sold by the Compass Bookstore, a well-known retailer in the 40s. I was still able to find it in a 1998 directory of San Francisco booksellers. By that time it limited itself to used and out-of-print material.
Actual copies of the book are uncommon. Over a dozen libraries hold copies. However, I found only one other copy available. A number of print-on-demand operations have found this title and offer it for sale. If you know me at all you know my opinion of those artless artifacts.
I cataloged the book this way:
Mensch, E. Cromwell. King Solomon's "first" Temple. San Francisco, California, E. Cromwell Mensch - Author, Publisher, 1947. First Edition. Octavo in dust jacket, 372 pp., b/w maps and drawings, The Index of Moses, index. Hardbound. Very Good.  (71648)      $95.00
For now my very nice copy of this eccentric and not quite on point for me title is still available.
Posted by Henry Hollander, Bookseller at 1:14 AM