Memorializing a teacher and a gadfly is a difficult thing to do when the audience you are speaking to never knew the person. For many years Daniel Persky was just a gold-stamped name on the spine of a few slow selling Hebrew books. He only came alive to me in an obituary, a random clipping that I found in another book one day The author was loving but light-hearted. The Persky he knew was a devoted teacher at the Herzliah Hebrew Teachers' College and a bit of an oddball. Persky, he wrote, never bothered to own more than one suit at a time. Persky selected his attire from the finest goods that thrift stores provided. One day the white batting was streaming out of the shoulder pad of one of these fine suits. His eager students apprised him of this sartorial flaw. Persky calmly dipped his fountain pen in ink and blotted the contrast away before preceding on with his lesson. This is the Persky that for many years I thought I knew. .
Luckily many different voices once rose to speak Persky's deeds. Dwight MacDonald profiled Persky in greater depth for the New Yorker in 1959. MacDonald wrote, "He buys good suits, but after that they're on their own. 'I can't be emptying my pockets all the time just to get a suit pressed,' he [Persky] says." (MacDonald, New Yorker, Nov. 28, 1959, p. 72.) MacDonald saw in Persky a man with little concern for the externals. His challenge was to understand how Persky could flourish outside of any version of a normal life.
MacDonald, neither Jewish nor a speaker of Hebrew nor even Yiddish, was a left-wing writer and critic. He was the editor of the Partisan Review from 1937 to 1943, a position that put him at the center of New York Jewish intellectual life. By the time he wrote his profile of Persky he must have known him for some time. MacDonald appears to have first come in contact with Persky in Persky's own apartment. Persky serially sublet the majority of his apartment to various leftish tenants. MacDonald was visiting his friends Edith and Noah Greenberg when Persky wandered into one of the Greenbergs lively parties to pose a question relevant to his work on a large Hebrew-English dictionary. What possessed MacDonald to pitch (successfully) Persky as a good profile subject is unknown. Nevertheless, MacDonald's portrayal of Persky was still very much in the mind of many of those who wrote about Persky at the time of and after his death. Eisig Silberschlag even footnotes MacDonald in his entry on Persky for the Encyclopedia Judaica. 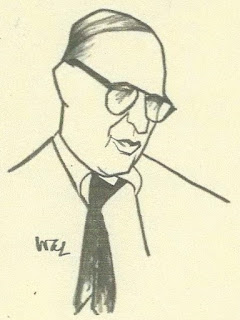 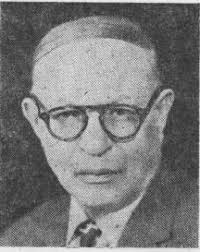 Persky was probably more important for his teaching, speaking, editing, advocacy and dissemination of literature than for his own literary contributions. His presence was seemingly everywhere and his column for "Ha-Doar," was sometimes a venue for Hebraist gossip. MacDonald quotes a variety of unnamed colleagues: "He is a fanatic, but a sweet-natured one. Everyone is indulgent toward him, and yet everyone respects him." "He is a kibitzer. At Meetings he stands around and tells everyone else how to do things." "...there is only one Daniel Persky. Un type as the French say,..." and "Persky is boring in a very interesting way." (MacDonald, 1959, P. 84-85).
Persky's specialty as a writer was the feuilleton. The form was originally a French form, a light essay. It was very popular in Yiddish and early Modern Hebrew literature. Persky was a great practitioner of the form. Meyer Waxman described his work in that area:"The range of his theme is wide, a daily event, a date in the Jewish calendar, the appearance of a book, the celebration of a writer's jubilee or his demise, impressions of travels, and numerous other episodes. The humor is wholesome and much of it consists in puns and manipulations of the language. ... There is little depth in the thoughtful essays, but we meet frequently with a brilliant reflection that makes us pause. Of interest is also the numerous anecdotes relating to the life and activities of many Hebrew writers met by Persky ... he has preserves bits of conversation and bon mots of his chosen heroes." (Waxman, Volume IV, Part Two, P. 1081-1082).
Among the collections of feuilletons are: 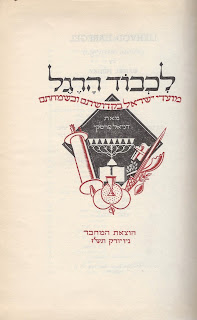 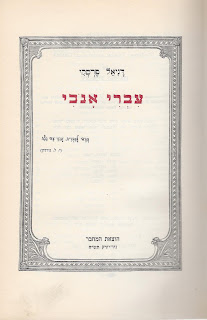 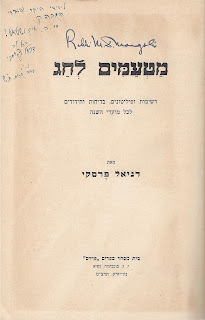 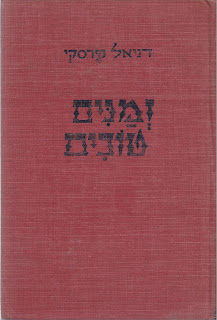 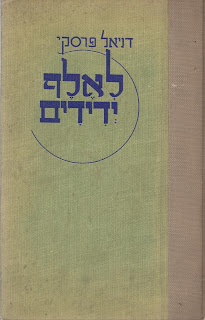 Persky, Daniel. Le-Elef Yedidim. New York, Vaad Ha-Yuval, 1935. Octavo, tan cloth spine green cloth covered boards with blue lettering, 96 pp. With a portrait of the author by Saul Raskin. Hardbound. Very Good. Text is in Hebrew. (32262)       $25.00
Persky was the house linguist for Camp Massad one of several Hebreaist summer camps that tried to advance the Ivrit be-Ivrit agenda. Summer camp took the children out of their English language environments and immersed them in Hebrew for weeks at a time. I don't know how many years Persky attended the camp, but for a certain number of years he was on hand to provide new words to fill out the lexicon needed for camp life. He created a dictionary for the Camp. 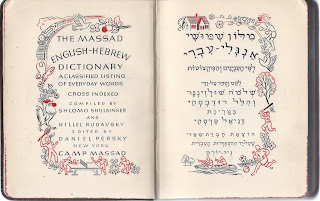 Persky, Daniel, edited by. The Massad English-Hebrew Dictionary: A Classified Listing of Everyday Words, Cross Indexed/ Milon Shimishi Angli-Ivri le-fi Ha-Inyanim veha-miktso'ot. New York, Camp Massad, 1947. 16mo, brown cloth with gold lettering, xxii, 271 pp. Hardbound. Very Good. In Hebrew and English. Compiled by Shlomo Shulsinger and Hillel Rudavsky. Meant for use at an American Hebrew speaking summer camp. (34206)  $20.00
The Massad Dictionary was not organized in ABC order. Rather it was organized by subject so that the campers could familiarize themselves with all the vocabulary related to a specific activity.
Persky was always involved in the children's supplement of "Ha-Doar," where he was the resident vocalizer. He did publish some material for children such as below. 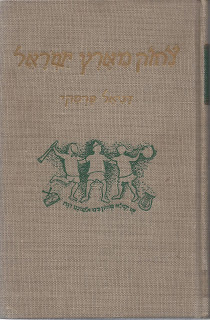 Persky, Daniel. Tsehok me-Erets Yisrael. Kitve Daniel Persky: Kerakh Sheni/ Israel Laughs. New York, 1950/1. Octavo, grey cloth with gold lettering and illustration in green, 267 pp. Hardbound. Very Good. Text is in Hebrew. (55021)      $25.00
Persky was not the most aggressive practitioner of "Amerikaniyut," but he did apparently have at least a minor moment of patriotism when he translated the US Constitution into Hebrew. 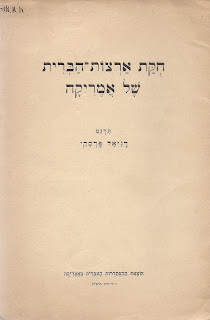 Persky, Daniel, translated into Hebrew by. Hukat Artsot ha-Berit shel Amerikah/ The Constitution of the United States of America. New York, Ha-Histadrut ha-Ivrit ba-Amerikah, 1928. Octavo, stapled paper covers, 14 pp.  Softbound. Very Good. Text is in Hebrew. (78230)      $18.00
Nowadays when the "Mikdash Me'at" for most people is an iphone or a tablet it comforts me to remember a man who loved words and good company more than data and social media. Daniel Persky offered an individual model for engagement with Jewish culture (whether one is religious or not) that still has something to say to today's American Jews and perhaps even to today's Israelis though few if any of them still are ready to listen.

Another good bibliographical reference on Persky can be found in the
לקסיקון הספרות העברית החדשה
edited by Yossi Galron at https://library.osu.edu/projects/hebrew-lexicon/01174.php. This entry, largely based on the work of the Israeli bibliographer G. Kressel details Persky's early years, his family, his education, his Zionist activities and his problems with the Russian authorities. It is a good source for some details of Persky's activities between 1927 and 1933. It also lists his publications and notes a variety of Hebrew language sources in him. It also reveals the pseudonyms, D. Daniel and Daniel Ben Rebecca, that he used when he wrote in Yiddish.

The entry for Persky in the Encyclopedia Judaica is by Eisig Silberschlag and can be found online entire in the entry Persky, Daniel on the Jewish Virtual Library website.
Posted by Henry Hollander, Bookseller at 2:50 PM