Sometimes the most interesting books come in and go right out. These books have been kicking around for some time and no-one seems to have ever noticed them. They all belonged to the same reader once upon a time. 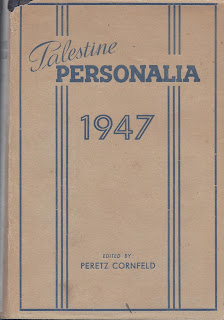 Cornfeld, Peretz, edited by. Palestine Personalia 1947. Tel Aviv, Palestine Personalia, 1947. Octavo in dust jacket with minor edge wear and a quarter sized chip at the head of spine, 360 pp. Hardbound. Very Good. Includes members of all groups, Jewish, Arab and British. (47509) Cornfeld was involved in later in most of the collective biographical directories published in the 1945-1949 period. These are all uncommon. This one, which includes a section "Palestinian Institutions and Enterprises," has only about a dozen holdings internationally.     $95.00 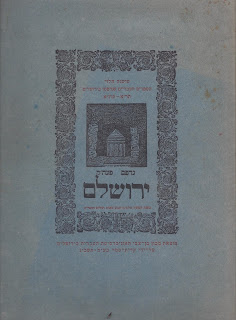 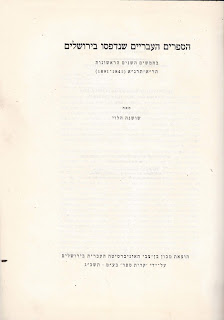 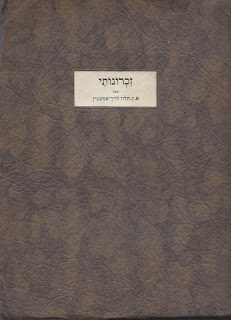 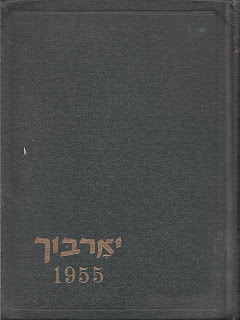 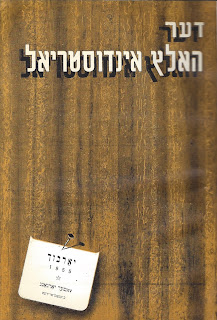 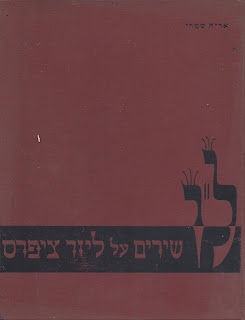 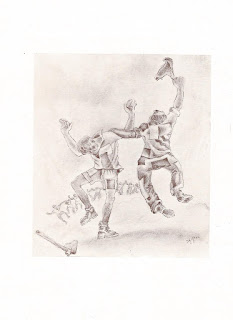 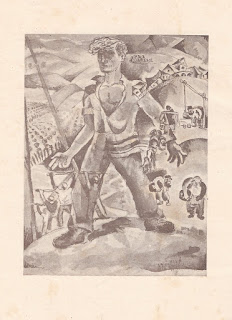 Shamri, Arie. L[amed] v.[av.] shirim al Lezer Tsipres: poemah. Tel Aviv, Hotsa'at ha-K.buts ha-Artsi ha-Shomer ha-tsair, 1939. Quarto, maroon cloth with black lettering, 88 pp., illustrations by Yitshak Polikvits. Foxing to the endpapers. Hardbound. Very Good. Translated into Hebrew from the Yiddish by A. Shlonski. Shamri was a prolific Yiddish author. This is the only volume of translations of his writings into Hebrew or any other language. Shlonsky was one of the most important Hebrew language author in Mandate Palestine. More on him below. I am not sure exactly who the illustrator is, but the work is interesting. (27786)      $75.00 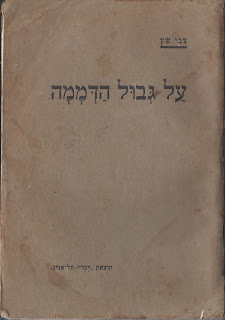 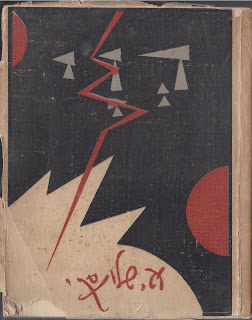 Shlonsky, Abraham. Devai: shete po'emot dramatiyot. Tel Aviv, 1924. Octavo, paper covers with edgewear and a small chip at the base of the front cover, 135 pp., two pasted-in illustrations and the cover design by Pinchas Litvinovsky. Softbound. Good. In Hebrew. Shlonsky the leader of the generation of modernist Hebrew writings in the cohort that followed Brenner and Bialik. He was particularly active as a translator with a preference for Russian literature. There are those who feel that modern Hebrew syntax has more to do with Russian syntax than Biblical Hebrew syntax and if there is any truth in that Shlonsky is the one to blame. In his later career be came to represent a more conservative stream within Hebrew literature Litvinovsky  attended the Odessa Academy of Art, the Bezalel Academy of Art & Design, and the  Academy of Art, Petrograd, in 1917. He was influenced by Constructivism. In 1926, he designed the sets for the Habima production of Ansky's Dybbuk. In later years he worked in Expressionist and then Minimalist styles. He has had exhibits at the major Israeli Art Museums and his works sell well in only in the four and five figure range. (47506)    $125.00