Saul Raskin produced some of the best illustrated books on Jewish themes but he is certainly under-appreciated. He began as a caricaturist in the Jewish press. The periodicals that he published in are not overly common. The best books illustrated entirely by Raskin in his caricature mode - which he gave up in the 1930s - are Erets Yisroel in vort un bild: Indrike fun tsvey rayzes (1921-1924) and Der shpigel fun der Ist Sayd/ The Mirrors of the East Side. Erets Yisroel is a travelogue authored by Raskin himself. Der shpigel fun der Ist Sayd is a collection of short profiles of Lower East Side figures with caricatures of each person profiled. Raskin probably knew them all.
Going through some issues of Zukunft from the teens I found an issue with an article by S. Malamad called "Tomye Atkins, Le Bon Zshon un der Dumer Oygust: A Bisel Soldaten-Psikhologye." Zukunft, which was began its run in 1895 and was published first by the Zukunft Publishing Association and later by the Forward Association. It still exists to this day as an online. The subtitle in early years included: A Monthly Magazine of Popular Science, Literature and Socialism or Zukunft: A Visnshaftlikh-Sotsyalistishe Monatshrift.
"Tomye Atkins..." appeared in a 1914 issue. World War One was a new thing and the full scale and horror of the war was not yet obvious. The tone is light - a comparison of the different style of the English, French and Germans. Remember, America was still neutral. Below are Raskin's illustrations of the three cultural exemplars. I was amused by his use of smoking as a differentiating characteristic. The Englishman smokes a pipe, the Frenchman a cigarette and the German a big fat cigar. Zukunft carried quite a variety of Yiddish language Tobacco and Cigarette ads. In another post I'll show some of those. 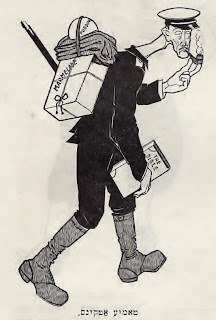 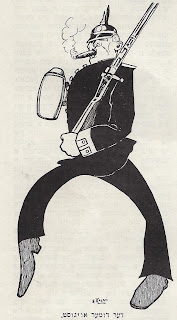