Pamphlets are a large part of my inventory. Below is a selection of some of the more interesting English language pamphlets and ephemeral items that have come through in the past couple of months. Mostly American radicalism with a Jewish connection (though mostly tenuous) and a couple of rare items specifically Jewish. 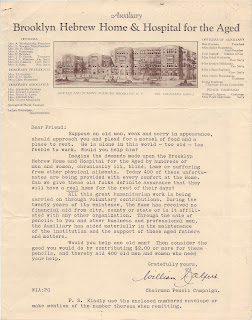 Alpert, William I. Auxiliary Brooklyn Hebrew Home & Hospital for the Aged [fund-raising letter]. Brooklyn, New York, Auxiliary Brooklyn Hebrew Home & Hospital for the Aged , c. 1927. Royal octavo, paper covers, 4 pp., creased across the center horizontally, b/w photos and a political cartoon on the rear. Softbound. Very Good. A fund raising letter/ brochure. The Brooklyn Hebrew Home was founded in 1907 and continues today at a different location and under the name Metropolitan Jewish Health System. Some images from the Brooklyn Visual Heritage archive can be found here.  (83396)     $18.00 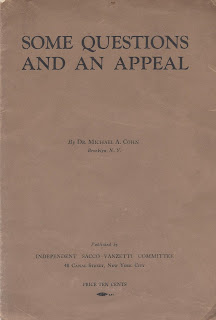 Cohn, Michael A. Some Questions and an Appeal. New York, Independent Sacco-Vanzetti Committee, 1927. Octavo, stapled paper covers with minor wear to the spine, 11 pp., minor soiling to the rear cover. Softbound. Good. Cohn was involved with the defense of the most important American Anarchists beginning with Emma Goldman and Alexander Berkman. This is Cohn's third and last publication on Sacco and Vanzetti. Uncommon. (83374)     $95.00 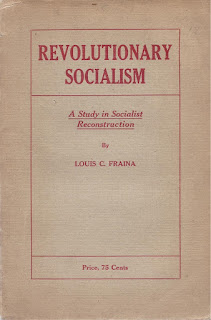 Fraina, Luis C. Revolutionary Socialism: A Study in Socialist Reconstruction. New York, The Communist Press, Publishers, 1918. Small octavo, paper covers with wear at the spine ends, 246 pp. Softbound. Fraina was a product of the hard-scrabble streets of the Bowery. He came to socialism and then to communism through his own program of self-education. He was one of the founders of the American Communist Party. His European and Soviet travels in 1919-1920 led to probably fallacious accusation of espionage. He had a long and active life, spending time in Mexico in the 1920s, and becoming an active Lovestonite in the latter part of the 1930s. He broke with communism in 1940. He died in the early 1950s while being hounded by the House Un-American Activities Committee and his old friends from the Communist Party. Very Good-. Signed by Fraina (later known as Lewis Corey) on the free front endpaper. (81972)      $50.00 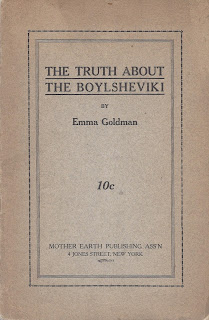 Goldman, Emma. The Truth About the Boylsheviki. ["Dedicated as my last contribution before going to Jefferson City, Mo., prison for two years, to the Boylsheviki in Russia in appreciation of their glorious work and their inspiration in awakening Boylshevism in America."]. New York, Mother Earth Publishing Ass'n., [1918]. Octavo, stapled paper covers, 12 pp., small chips at the open corners of the rear panel. Softbound. Good. Uncommon. (83375)       $295.00 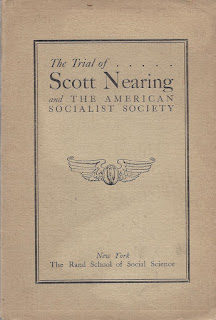 Hillquit, Morris, preface by. The Trial of Scott Nearing and the American Socialist Society. Presiding Judge - Julius M. Mayer. Attorneys: - For the Government: Earl B. Barnes. For the Defense: Seymour Steadman of Chicago, S. John Block of New York, Walter Nelles of New York, I.M. Sackin of New York, United States District Court for the Southern District of New York, New York City, February 5th to 19th, 1919. New York, The Rand School of Social Science, 1919. Duodecimo, paper covers, 249 pp., ads. Softbound. Nearing was acquitted but the the American Socialism Society was not. Nearing's radical socialism faded into the background of his Tolstoyan preaching of simple living. This is how I knew him in my youth and his old age. He one of the few figures from the teens whose activity ran from the teens through the eighties. Very Good.  (81974)    $27.50 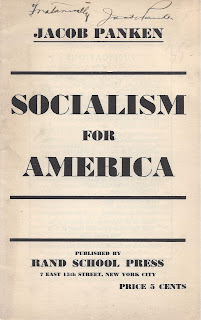 Panken, Jacob. Socialism for America. New York, Rand School Press, c. 1933. Octavo, stapled paper covers, 16 pp. Softbound. Very Good. Briefly inscribed by the author on the front cover. Panken was a major figure in the Socialist Party of America in the first third of the Twentieth Century. He served as a municipal court judge in New York City for ten years and ran for many other higher offices as the Socialist candidate unsuccessfully. He was eventually pushed out of the party late in his career and founded the Social Democratic  Federation. Sadly he was also active in the anti-Zionist camp. (82004)     $35.00 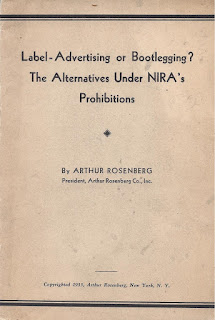 Rosenberg, Arthur. Label-Advertising or Bootlegging? The Alternatives Under NIRA's Prohibitions. New York, The Author, 1933. Octavo, stapled paper covers with mild soiling, 12 pp., political cartoon. Softbound. The history of advertising is tied up in the history of prohibition and the subsequent effort to rectify all of the falsehood that was of the essence of bootleg liquor advertising. Good.  (82006)        $40.00 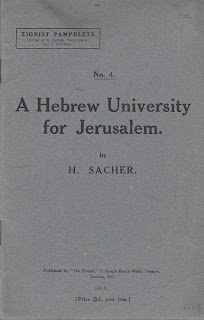 Sacher, H. A Hebrew University for Jerusalem. Zionist Pamphlets No. 4. London, "The Zionist", 1915. Octavo, stapled paper covers, 16 pp. Softbound. Very Good. An uncommon pamphlet and an early one on the subject of a Jewish university in the Land of Israel. Sacher was a lawyer with office in both Mandate Palestine and London. He was active in the actual work that led to the creation of Hebrew University. (83398)      $75.00 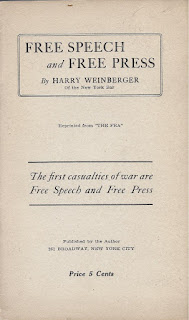 Weinberger, Harry. Free Speech and Free Press. The first casualties of war are Free Speech and Free Press. New York, The Author, [c. 1917]. Duodecimo, stapled paper covers, 8 pp. Softbound. Very Good. Reprinted from "The FRA." Undated. Because it discusses the Irish Revolt it can't be dated earlier than 1917. The 1917 date of US entry into World War One seems another logical reason to date the pamphlet 1917 as well. Worldcat usually lists 1917, but there is one date entry that places the date at 1944. Perhaps the item was reprinted by Weinberger again during the Second World War. The type face indicates the teens more than the 40s, but if the item was a reprint then that might be of no consequence. I'll bet on 1917 as the date, but with the above concerns as noted. (82007)      $25.00 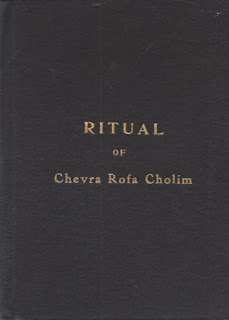 Ritual of Chevra Rofa Cholim, including Opening, Closing, Initiation and Installation Ceremonies, The Order of Business and Funeral Ritual. [San Francisco], Chevra Rofa Cholim, 1890s. 16mo, black cloth with gold lettering, marbled pastedown endpapers, 13 pp., two sheets loose. Hardbound. Good. Chevra Rofa Cholim was one of the many Jewish burial societies in San Francisco in the 1890s. There are no copies listed in Worldcat and the book does not appear in Sara Cogan's bibliography on the Jews of San Francisco and I could not locate it in Kaganoff's "Judaica Americana." The Magnes Museum collection which was surrendered to the Bancroft Library may include a copy of this book, but if so, it has not been cataloged. A rare book and perhaps a unicum. (83291)      $350.00
Posted by Henry Hollander, Bookseller at 11:24 PM