These items are available only through direct sale and are not listed on our website (http://www.hollanderbooks.com) at this time. Orders can be placed by email at boychik@hollanderbooks.com or phone number 415-831-3228.

Amsterdam is great city known for tolerance and an openness to the world. It has made its fortunes time and time again by trading with with world. The Netherlands became a unified entity under the Duke of Burgundy in 1433 as part of the Holy Roman Empire. Amsterdam was the home of Erasmus who was one of the central figures of Renaissance philosophy. Protestantism made inroads in the Netherlands. First the Lutheranism, then Anabaptism, the Mennonite faith and finally Calvinism rolled through Dutch society in waves. Charles V, the Duke of Burgundy and Kings of Spain, and later Holy Roman Emperor strongly opposed Protestantism. This led to increasingly oppressive governance in the Netherlands on the part of the Spanish crown and ultimately a Dutch revolt which began a long era of religious war on the continent. After fifty years of conflict between Spain and the Netherlands the conflict spilled out into a larger European conflict, the Thirty Years War.
Many Spanish Jews had fled to the Netherlands in the era before the inquisition and in the face of the establishment of the inquisition in Spain. New Christians were able to leave either more comfortable lives as Christians without the inquisition or to return to their Jewish faith. The Spanish war against the Netherlands put the Jews clearly on the side of the revolt against Spain. Anti-Spanish piracy in the Caribbean was in part managed by Jewish interests in Amsterdam. Despite the inevitable economic setbacks of wartime this era proved to one of great and rising prosperity for the Dutch.
Printing came to the Netherlands as early as 1470 though the actual date is subject to some uncertainty. A number of books were printed by a figure known as "Printer of Speculum," in Utrecht. Among these are a title "Speculum," hence the appellation, and a Latin Aesop. The two great printing firms of the 16th century were Plantin and Elzevir. "Plantin's agents went as far as North Africa where they sold Hebrew Bibles to the numerous Jewish congregations." Steinberg, p. 127. From the beginning Dutch printing was a multi-lingual enterprise. In addition to Greek, Latin and Hebrew there were also books printed in the Dutch vernacular and even in additional languages. Plantin published the Biblia Regia, a polyglot bible, an event neatly encapsulating Dutch printing. The Netherlands was a powerful educational magnet and the many Classical works printed by Plantin and Elzevir served as ambassadors when the many foreign students returned to their native countries with them. Both enterprises were tremendous financial successes and provided a model for the successful commercialization of printing. They also used quality type, initially provided by exacting French type-cutters. They both has an interest in quality illustrations and in the promotion of their brand by uniformly sized volumes and prominently presented printers emblems.
In the seventeenth century Dutch printing showed itself best in the printing of maps. The era is referred to as the Golden Age of Cartography. Willem Janszoon Blaeu, one of the premier cartographic printers (a student of Tycho Brahe) made improvement to the design of the printing press. "He added a counterweight to the pressure bar in order to make the platen rise automatically." Jean-Pierre Luminet, p. 3. An example to Blaeu's printing press is included as item 252 in the important Printing and the Mind of Man exhibit. Menasseh Ben Israel became the first active Jewish printer in Amsterdam in the 1630s. The earliest Hebrew typefaces were Italian, primarily from Venice. Robert Estienne and Guillaume Le Be in France developed typeface with the aid of Italian type cutters. Later Hebrew type was of low quality. However, Joseph Athias, a Jewish printer, bought out the Elzevir type-foundry in 1680 and kept up a standard of better quality "Amsterdam Type." The type used in the volumes below are printed out of that reservoir of type.
The eighteenth century was the era when the Dutch accumulated their colonial empire. The state moved towards democracy and enlightenment under increasing French cultural influence. It was a strong era for Hebrew printing with several Jewish printing firms in production throughout the century. The Proops family was the most successful of these continuing in business for three generations. Below we list two of their products. Dutch Hebrew printing served elements of the German market and was a source for quality printed edition to Eastern European Jewry where printing as it entered the area continued to spread but at a low aesthetic level. 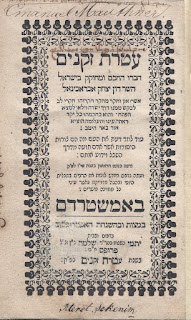 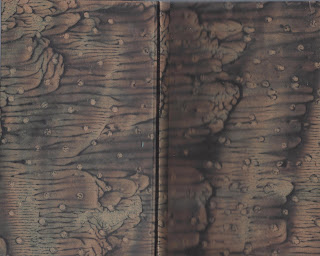 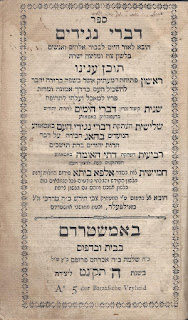 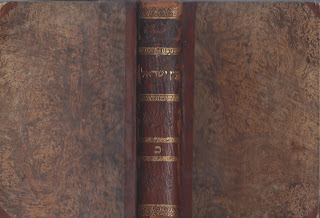 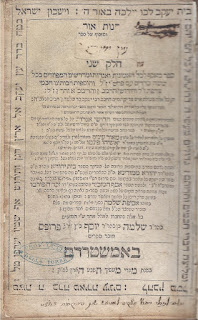 Ibn Habib, Jacob ben Solomon. Sefer En Ya'akov. Helek Sheni. Amsterdam, Shelomoh ben Yosef Kats Props, 1725. Small octavo, half brown leather with gold lettering and decorations worn at the edges and ends, marbled paper covered boards, wear at the open corners, aeg with stamped designs, newer endpapers with the title-page reattached professionally, 340, 3 leaves [680, 6 pp.], table of abbreviations. Hardbound. Good. Text is in Hebrew. The second of three volumes. The Spine lettering reads "En Yisrael" and a worn hand-written piece of paper has been laid down on the title page that appears likely to have read the same. Another work by that title was published by Proops in the same years. However, this inserted attribution appears to be in error. The pagination as laid out in Vinograd matches En Ya'akov and not En Yisrael. (83516)    $150.00 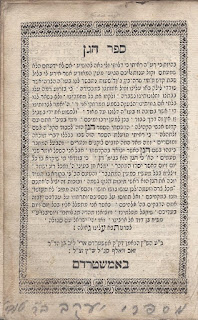 Isaac Ben Eliezer. Sefer Ha-Gan. Amsterdam, Ari Lib ben Ze'ev Wolf Segal, 1713. 16mo, tan leather spine, worn green decorative paper covered boards, 16 pp., old rabbinic hand notes on the free endpapers, loss to the rear pastedown endpaper. Hardbound. Good. Translated from the original Judeo-German [Early Yiddish] by Moses Sertel. Isaac ben Eliezer was an, "Ethical writer at Worms; flourished from 1460 to 1480. He attended the lectures of Moses ben Eliezer ha-Darshan (Zunz, "Z. G." p. 105), whom he praises in high terms. Isaac wrote in German an ethical and ascetic treatise under the title "Sefer ha-Gan" (Cracow, about 1580). It is divided into seven parts, one for each day in the week. Translated into Hebrew by Moses Saertels, it was subsequently printed, together with Johanan Luria's "Sefer ha-Derakah," in Prague (1597, 1612) and Amsterdam (1663, 1713)." Jewish Encyclopedia. This text was an early example of a "Sefer Midot." (see Israel Zinberg). This particular edition includes only "Sefer Ha-Gan." At sixteen pages (eight leaves) this edition is smaller than any of the other editions that include the second work "Sefer ha-Derakah." It is attested in Steinschneider and in Vinograd but appears to be quite uncommon. Most of the entries for this item in OCLC refer to other editions that clearly include both works. (83513)      $350.00 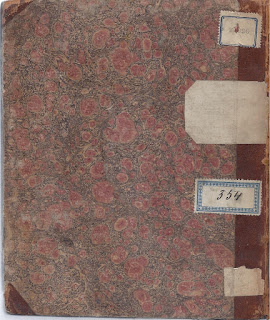 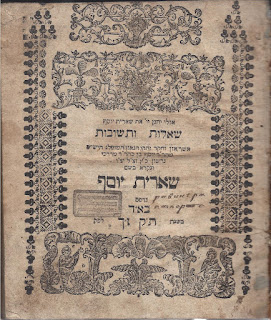 Joseph ben Mordecai Gershon, ha-Kohen of Cracow. She'elot u-teshuvot: ve-nikra be-shem She'erit Yosef. [Amsterdam], 1767. Octavo, brown leather spine worn at the edges with paper labels, marbled paper covered boards, 58 leaves, the last few leaves cut close to the edges of the text, lacking the free endpapers. Hardbound. Good. Text is in Hebrew. Contains, "Responsa and discussions on various rabbinical subjects, as well as a commentary on the "Mordechai" Tractates Nezikin, Berakot, and Mo'ed. In the preface the author states that he published this work at the request of his sons, Tanhuma and Aaron Moses, who were members of the Jewish community of Cracow. He also corrected the manuscript from which was printed the "Aggudah" of Alexandri HaKohain of Frankfurt." Jewish Encyclopedia. (83536)      $395.00 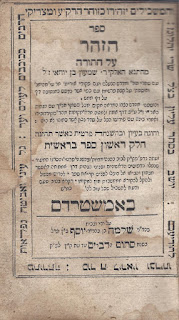 Shimon Bar Yohai [putative author]. Sefer ha-zohar: al ha-Torah. Helek Rishon Sefer Bereshit. Amsterdam, Bi-defus ube-vet Shelomoh ben Yosef Props, 1715. Duodecimo, brown leather with raised bands with some worming to the spine leather and the leather of the front board, free front endpaper strongly soiled with some early pen, old rabbinic notes on the following blanks in three different hands, 152, 14 leaves (303, 29 pp.), some occasional internal soiling and water-staining, with some wear to the rear endpaper. Hardbound. Good-. Text is in Hebrew. Includes the text of the Zohar in parallel columns of "Midrash Ha-Na'alam." Published in three volumes. This is the first. The second volume was of Shemot and the final three books of Moses are in the last volume. Complete sets are rare. (83515)      $395.00

Printing and the Mind of Man Assembled at the British Museum and at Earls Court London 16-27 July 1963. London, Messrs F.W. Bridges & Sons Ltd. and The Assocation of British Manufacturers of Printer's Machinery (Proprietary) Ltd., 1963