These items are available only through direct sale and are not listed on our website (http://www.hollanderbooks.com) at this time. Orders can be placed by email at boychik@hollanderbooks.com or phone number 415-831-3228.

In the mind of the Jewish world Venice is a bold and bright jewel of memory served up by the preservation of the Venician Ghetto. The Ghetto brings a qualified comfort by the beauty of its remains despite the selfsame proof that it offers of the civil disability that created its distinctive communal character. In this light it is natural to expect that the first Hebrew printed books in Italy would have come from Venice, or if not from Venice from Rome whose ancient Jewish community lived beneath the windows of the rulers of the capital of the Papal states. But Italy is as a much a land of small towns with their own stubborn integrity as of beautiful independent cities. The first traces of the history of the Hebrew printed book in Italy (and all the world) appeared in Reggia de Calabria, Pieve de Sacco, Mantua, Ferrara, Bologna and Soncino.
Israel Nathan Soncino established the first really successful venture in the printing of Hebrew books in Soncino (In Cremona between Brescia and Pavia) in 1483 with his editions of Masekhet Berakhot and Betsah. Though he passed through Venice he never engaged in printing there. As a consequence of many vicissitudes the family enterprise was ultimately transferred to Constantinople where they were the first printers of any book as well as the first printers of a Hebrew book in that locality. In honor of that association we include an imprint from Constantinople with our Venician imprints.

The first recorded Hebrew imprint in Venice was in 1500. It was an alef-bet book with instructions in Latin printed by Aldus Mantius. Further Hebrew printing did not occur until 1511 and the first era of Venician Hebrew printing did not begin in earnest until Daniel Bomberg, a Christian printer with the support of the pope began printing in 1519. It was the competition of Bomberg that forced the Soncino's to leave Italy. Bomberg had among his printers apostate Jews with whom the Soncino's began a quarrel that cost them their patronage and in general drew unwanted attention to the role of Jews in printing. Bomberg completely dominated Hebrew printing into the 1540s when Cornelius B. Baruch Adelkind who had long worked for him began working with Giovvani de Gara, on his own and finally for Marc Antonio Giustiniani. Bomberg died in 1549 or 1550 and his last publication was in 1549. Giustiniani began publishing in 1546. The Bragadini family sought to enter the Hebrew printing market. Aloisio Bragadini's first publication was an edition of the Mishneh Torah of Maimonides which came out in 1550. A tremendous dispute began between the house of the Giustiniani and the Bragadini. They each employed several Jewish apostates to make their case for their own virtues before the papal courts in Rome. The rather horrid result of this advocacy was the resolution of the church to suppress the Talmud which lead to the destruction of perhaps hundreds of thousands of Hebrew books and manuscripts.
Hebrew printing was almost completely disrupted between 1553 when the Papal Bull was issued and 1556 when Hebrew printing did begin to return. The subsequent output of the Venician presses is noticeably different. The emphasis on Talmudic Masekhtot gave way to the printing of bibles, prayer books and original works by contemporary authors.
Below we offer one Giustiniani and one Bragadini imprint as well as one other from a lesser publisher. 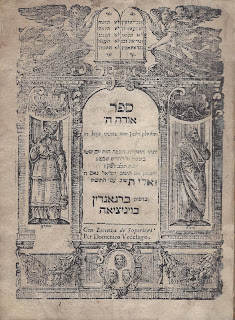 Gerasi, Daniel ben David ben Elijah. Sefer Odeh H.: ve-hu helek rishon mi-mah she-derashti ... Venice, Bragadin, 1681. Octavo, rebacked in nineteenth-century binding, black cloth spine with chipping at the head and gold lettering, marbled paper covered boards, lacking the later free endpapers, 52 leaves [104 pp.], water-staining. Hardbound. Good. Text is in Hebrew. This appears to be the only edition of the only work published by this Salonika preacher. The leader of the Bragadini enterprise during this period was probably Vicenzio II or Aloisio III. (83787)      $350.00 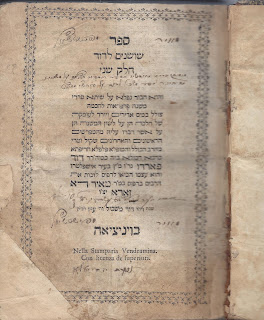 Pardo, David Samuel ben Jacob. Sefer Shoshanim le-David: ve-hu hibur nifla al shita sidre Mishnah ... Helek Sheni [of Two]. Venice, Bi-defus Me'ir Da Zara, 1751/2. Octavo, brown leather spine with raised banks, loss at the ends, paper label continues from board to board across the spine, marbled paper covered boards, lacking the free front endpaper, mild loss and repair to the title page, penned marginalia in the margin of the following leaf, 220 leaves [440 pp.], with significant loss and repair to the final four leaves. Hardbound. Poor. Text is in Hebrew. This work, the author's first published, appeared while the author was still in his thirties. He was born in Venice and held various Rabbinical positions in Adriatic Jewish communities before retiring to the Holy Land in his old Age. Da Zara was a minor figure who published a few books in Venice starting in 1842 and continuing into the 1850s. (83578)      $195.00 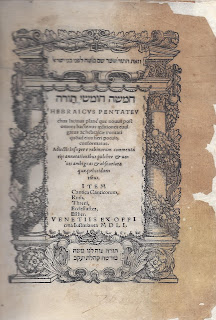 Hamishah Humshe Torah: Hebraicus Pentateuchus latinus plane´que nouus post omnes hactenus aeditiones euulgatus ac hebraice veritati quoad ejus fieri potuit, conformatus : adjectis insuper e rabinorum commentariis annotationibus [by S. Munster]. Item Cantica Canticorum, Ruth, Threni, Ecclesiastes, Esther. Venice, Ex Officina Justiniana [Marco Antonio Giustiniani], 1551. Octavo, modern rebacking in olive cloth with a brown leather label with gold lettering, ccviii, 209-376 leaves [752 pp.], repairs at the margins of the title page and  the first xxxvi leaves, many pages have Latin notes in the margins and there is a great deal of worming in the margins effecting these notes. However, the repairs and notes rarely enter into the area of the type block. With a full page printers device of the Bet Ha-Mikdash on the final page. An article on the printer's mark, "The Printer’s Mark Of Marco Antonio Giustiniani And The Printing Houses That Utilized It," by M.J. Heller, appears in "Studies in the Making of the Early Hebrew Book, Volume 15," Leiden, Brill, 2007. With head pieces at the beginning of Bereshit, Vayikra, Bamidbar, Devarim, and Shir Ha-Shirim.
Hardbound. Fair. Text is in Hebrew and Latin in parallel columns with notes in Latin. "An edition of the Pentateuch and the Megilloth in Hebrew and Latin, with Latin notes drawn from Rabbinical sources." Darlow & Moule, v. 2, pt. 2, 5094. Type for the Giustiniani was created by the French type-cuter Giullame le Be mentioned in our previous post. This is the only title that Giustiniani published in a bi-lingual format. The choice of subject matter and the bi-lingual text may have been an effort to appeal to a broader market as well as en effort to make the inoffensive nature of the text more explicit. Regardless, the Giustiniani firm was on the rocks. Two original Hebrew works were published in 1551 by Giustiniani. In the following year the nearly moribund firm published a few bibles and prayer books including one Yiddish prayer book for women before closing shop. (83566)     $750.00