Rare or uncommon items about Women's Suffrage in England

Recently, while taking apart a decrepit palimpsest of Yiddish pamphlets on various left causes I found these English language pamphlets included at the rear. These sorts of volumes turn up for me often enough, but I don't remember ever finding English language materials included with the Yiddish materials. It is, however, not hard to imagine how these might have come into the hands of a radicalized Whitehall Jew. Whitehall in the pre-World War One period was a seething cauldron of leftist, socialist, communist, Zionist, anarchist, and Suffragist activity. Below are descriptions of the pamphlets and their authors from a fascinating place and a fascinating time. 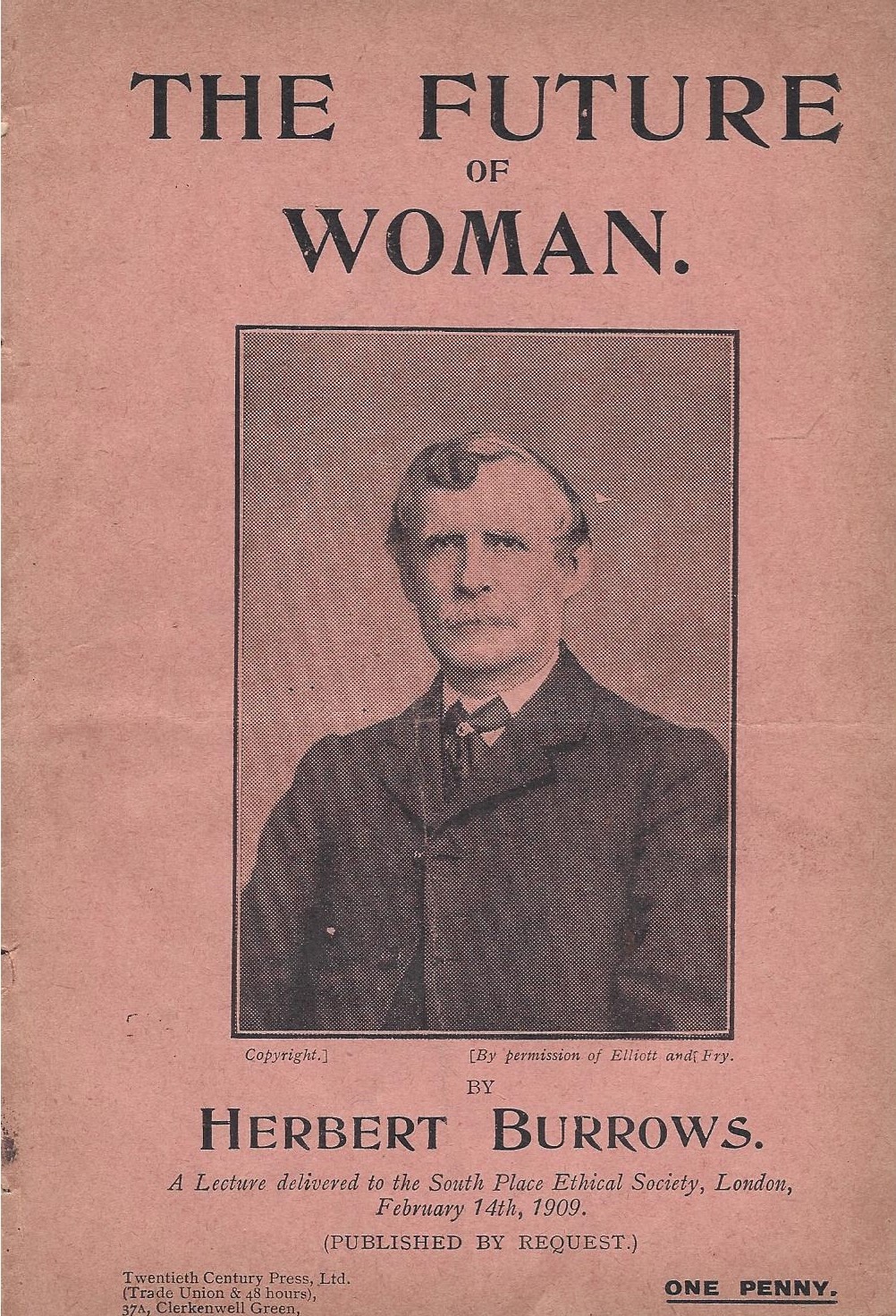 Burrows, Herbert. The Future of Woman: A Lecture delivered to the South Place Ethical Society, London, February 14th, 1909 (Published by Request). London, Twentieth Century Press, Ltd., March, 1909. Octavo, stapled paper covers, 16 pp., with minor wear to the spine edge. This pamphlet was bound into a larger volume and has been disbound with the original covers retained. Softbound. Good. Burrows lecture includes many citations from the writings of Olive Shreiner to whom the pamphlet is dedicated. Includes at the end, "We, As Women," by Charlotte Perkins Stetson.
Burrows was the son of a Chartist. The Chartists were a working class movement for universal male suffrage. He continued in that struggle in his early life and expanded his horizons to the struggle first for women's rights and economic relief and later on the issue of Women's Suffrage. He was involved with Annie Besant both as a labor organizer and as a theosophist. This pamphlet comes from the late period of political life. He ran for parliament in 1908 as a member of the Social Democratic Federation which he had belonged to since its inception in 1881 but lost. Two years later, after the intervening publication of this pamphlet he left the SDF and retired from politics. (71980)     Sold 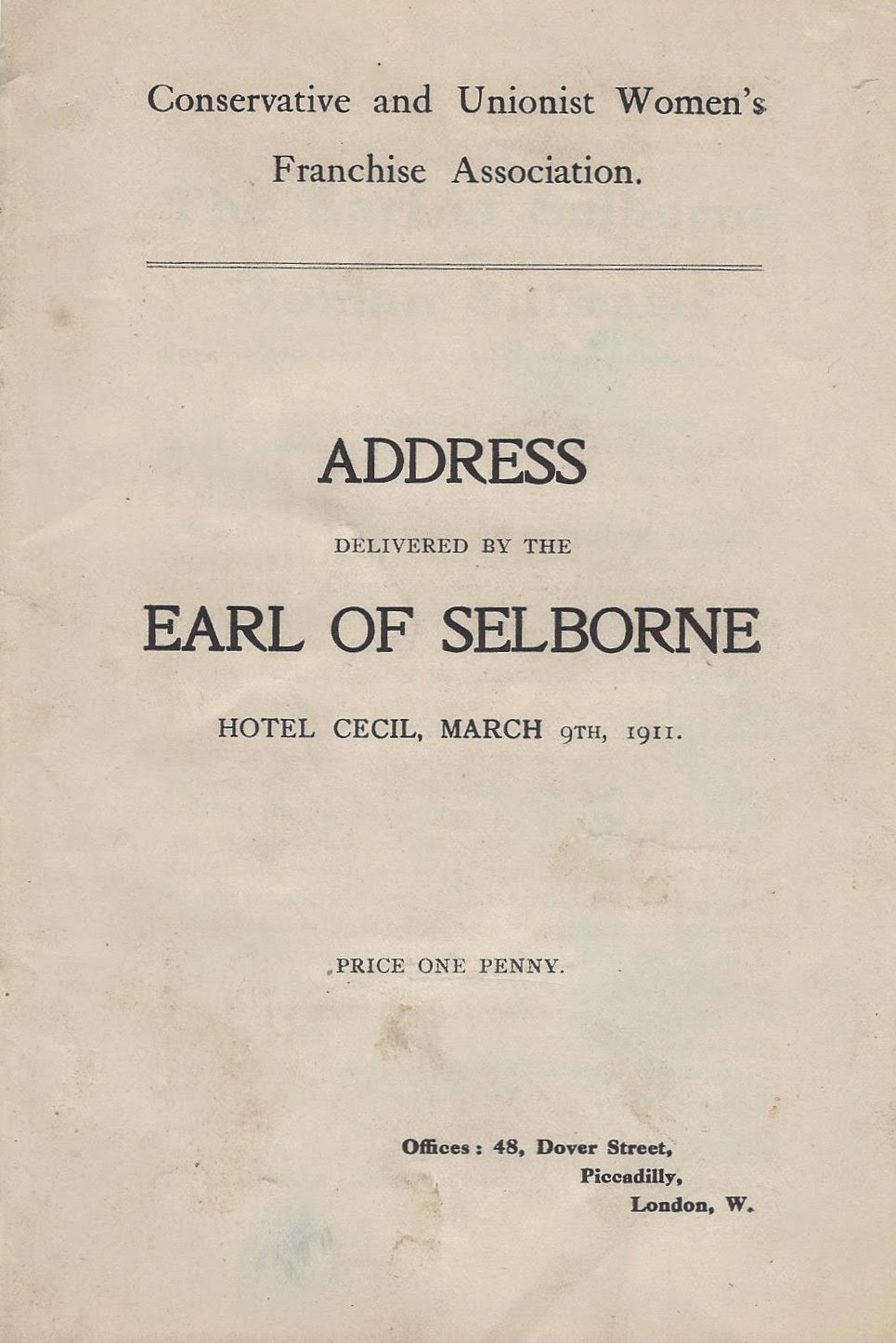 Earl of Selborne [William Waldegrave Palmer, 2nd Earl of Selborne]. Address delivered by the Earl of Selborne, Hotel Cecil, March 9th, 1911. London, Conservative and Unionist Women's Franchise Association, 1911. Octavo, stapled paper covers, 16 pp., with minor wear to the spine edge. This pamphlet was bound into a larger volume and has been disbound with the original covers retained or not (it is hard to tell). Softbound. Good. The Earl and his wife (Beatrix) Maud Palmer became very involved in the struggle for Women's sufferage after the Earl resigned from his position as the High Commissioner in South Africa and Governor of the Transvaal and the Orange River Colony in 1910. Although the Earl of Selborne began as a member of the Liberal party, which in later years was the stronger source of support for Women's Suffrage, he was by this point quite entrenched in the Conservative Party. This is a clear example of the way that the Sex War that was so much an aspect of the Suffrage struggle cut across society in ways that did not in any map to the general political situation in Britain. Appears to be held only by the British Library. (71981)      Sold 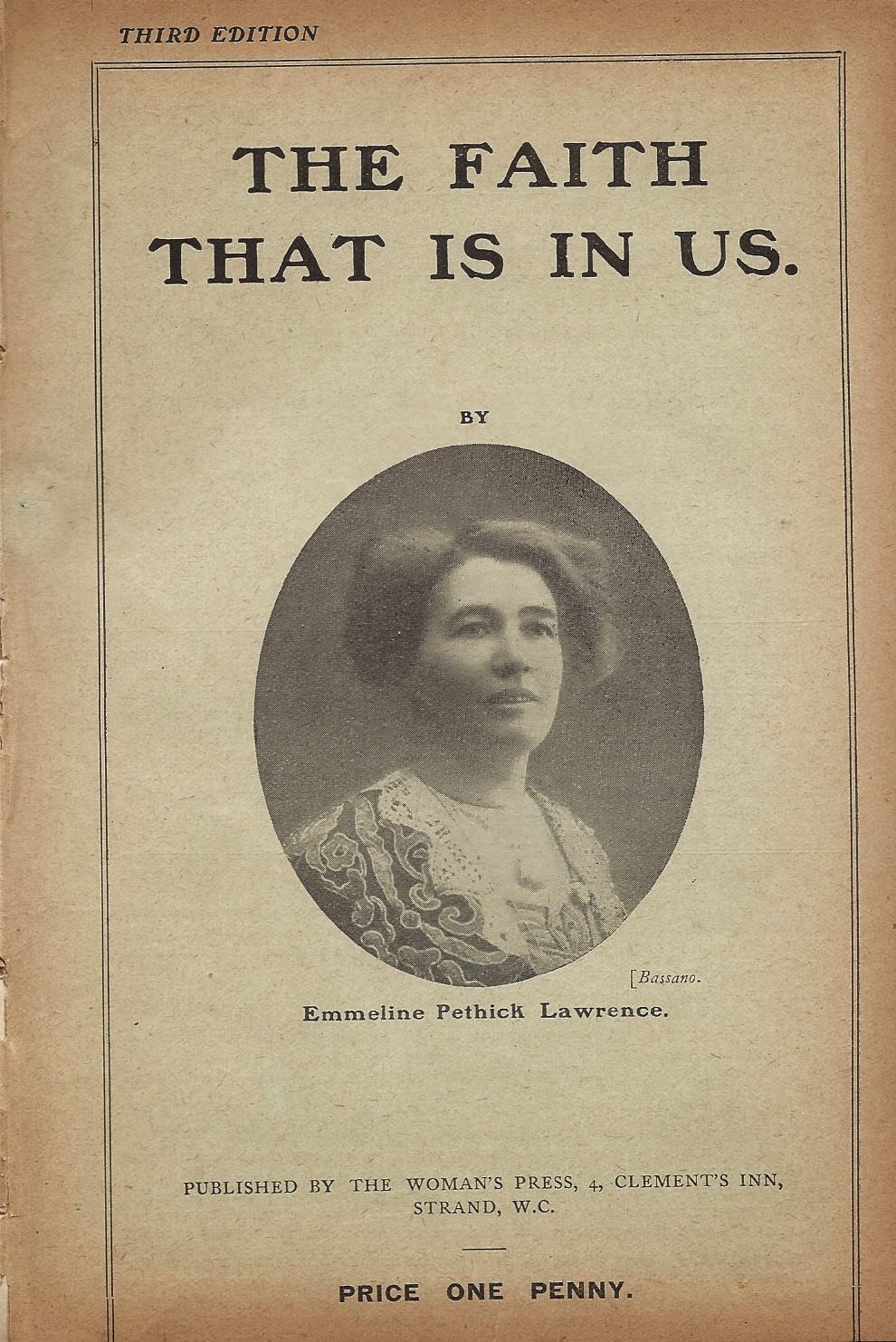 Lawrence, Emmeline Pethick. The Faith That Is In Us (A Verbatim Report of a Speech delivered at the Aldwych Theatre.). London, The Woman's Press, c. 1909. Third Edition. Octavo, stapled paper covers worn along the spine, 16 pp. This pamphlet was bound into a larger volume and has been disbound with the original covers retained. Softbound. Good. Many institutions hold microfilm of this but only a few hold the actual item.
Lawrence Pethick and her husband Frederick William Pethick-Lawrence took each others last names at their marriage in 1901 and later hyphenated their names to Pethick-Lawrence. They were involved with the Women's Social and Political Union originally organized by Emmeline Pankhurst. They were all arrested during a window breaking campaign in 1912 for which both were sentenced to prison time. During this imprisonment Emmeline Lawrence Pethick endured force-feeding. Disputes over method found the Lawrence-Pethick's expelled from the WSPU after their release. As mentioned in the following pamphlet, they left the country for Canada in order to recover from their incarceration. Frederick was sent to work on a farm in Sussex towards the end the First World War due to his Conscientious Objector status. The success of the movement and the war limited their role in Suffrage after 1913 but they continued on as progressive and Labour party figures. In government, Frederick served as Secretary of State for India and Burma between 1945 and 1947 and was active in the negotiations that led to a free India. (71977)  Sold 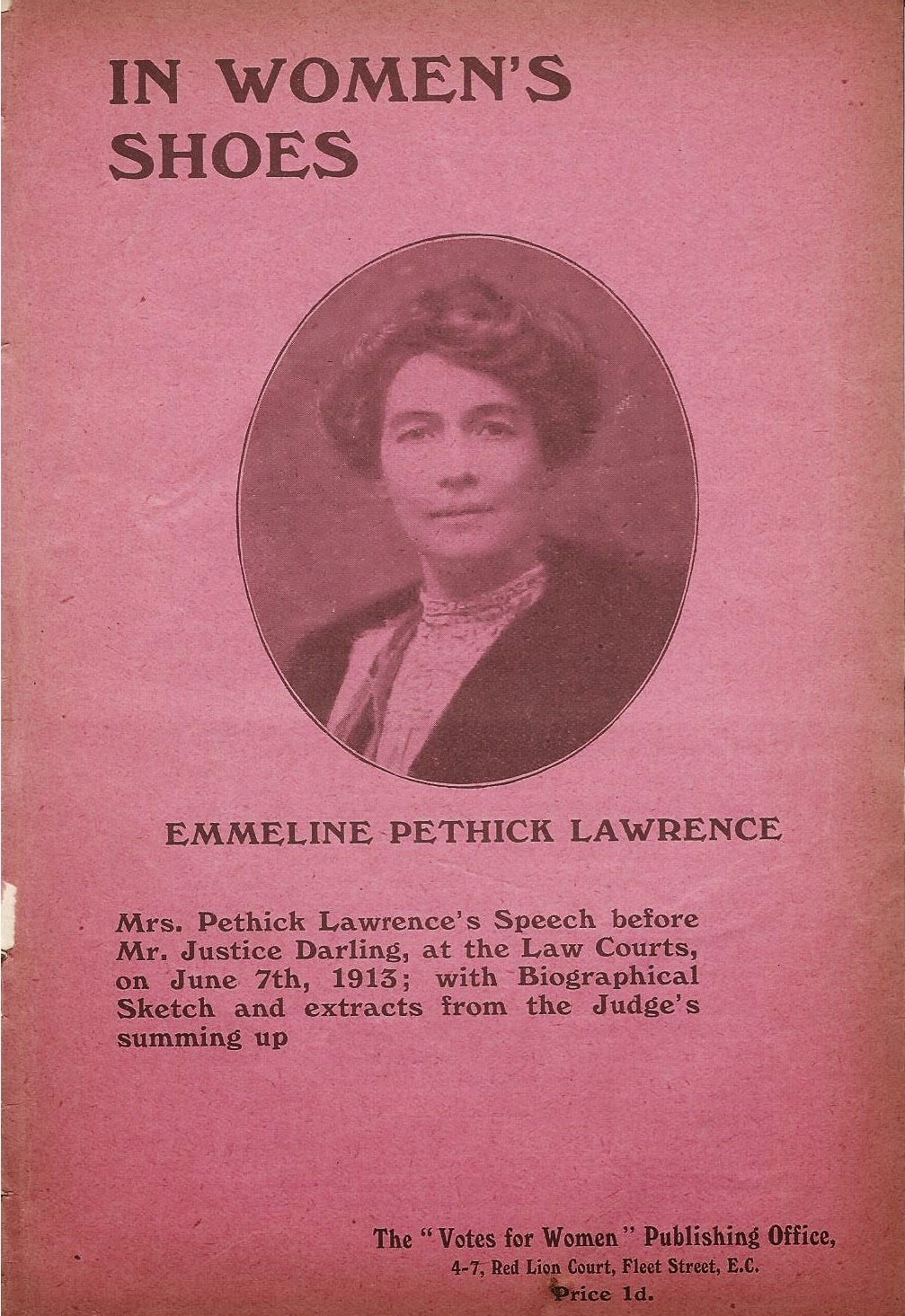 Lawrence, Emmeline Pethick. In Women's Shoes: Mrs. Pethick Lawrence's Speech before Mr. Justic Darling, at the Law Courts, on June 7th, 1913; with Biographical Sketch and extracts from the Judge's summing up. London, The "Votes for Women" Publishing Office, 1913. Third Edition. Octavo, stapled paper covers worn along the spine, 16 pp. This pamphlet was bound into a larger volume and has been disbound with the original covers retained. Softbound. Good. Rare. (71978)     Sold 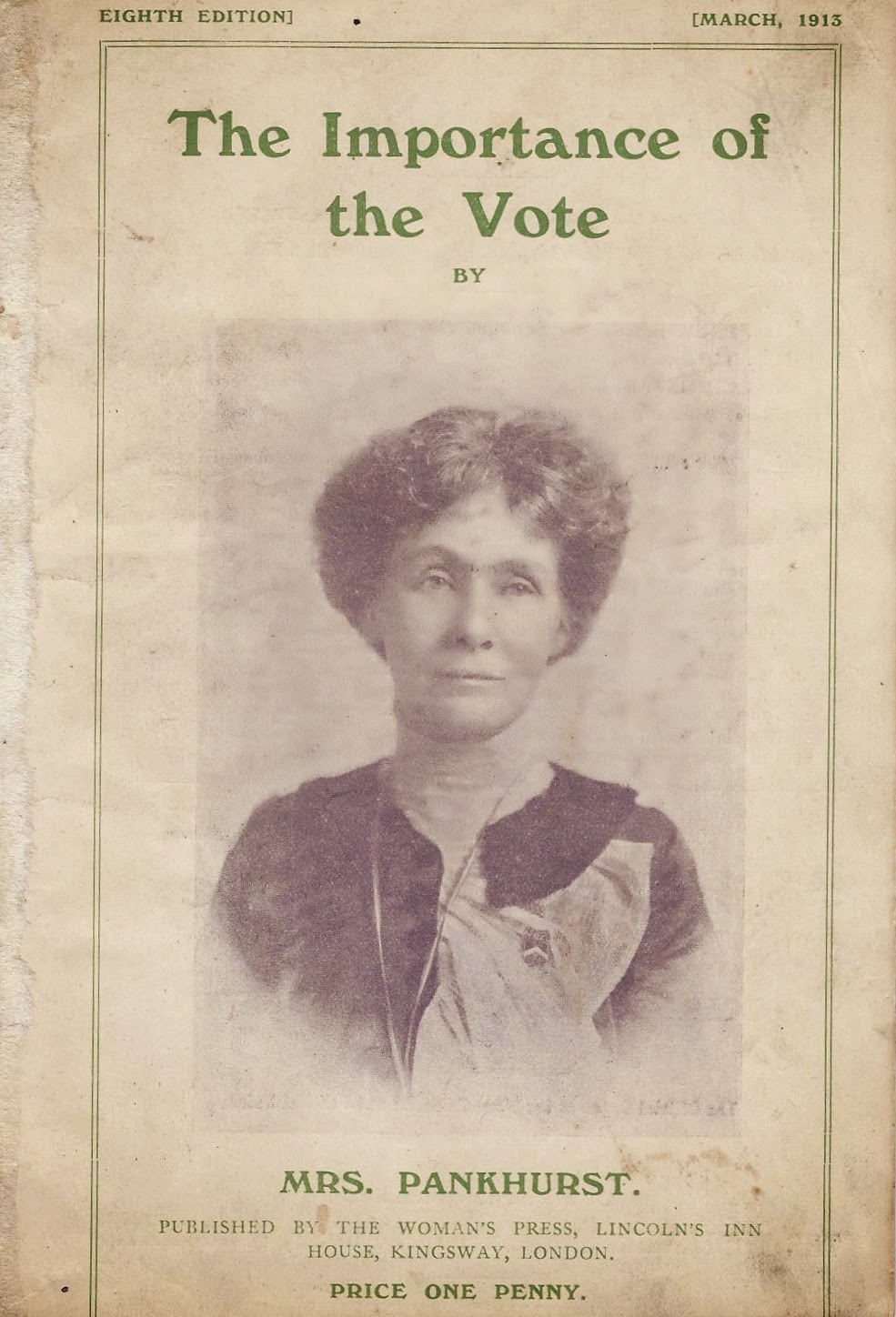 Pankhurst, Mrs. [Emmeline]. The Importance of the Vote (A Lecture delivered at the Portman Rooms, on Tuesday, March 24th, 1908.). London, The Woman's Press, March, 1913. Eighth Edition. Octavo, stapled paper covers, 12 pp., with minor wear to the spine edge. This pamphlet was bound into a larger volume and has been disbound with the original covers retained. Softbound. Good.
Emmeline Pankhurst is a sufficiently well-known figure that I needn't speak generally about her. Most important to say is that she led the most radical element of the struggle for Women's Suffrage. In their time those advocating Suffrage for Women were know as Suffragists. Only the radicals like Pankhurst were referred to as Suffragettes. She endured force feeding during one of her imprisonments and ended it by threatening to violently resist further force feeding. The idea within the Suffragist movement that violence (if only violence against property and sometimes the police) was warranted came in large part from the great violence that these women suffered in the pursuance of their activism. Pankhurst eventually created a bodyguard of trained women to protect her. Her embrace of violence as an activist means caused a lifelong break with two of her three daughters despite their own strong loyalty to the cause.   (71979)   Sold
Posted by Henry Hollander, Bookseller at 3:15 PM