A selection of titles that caught my particular interest in a large group on new Hebrew literature titles. 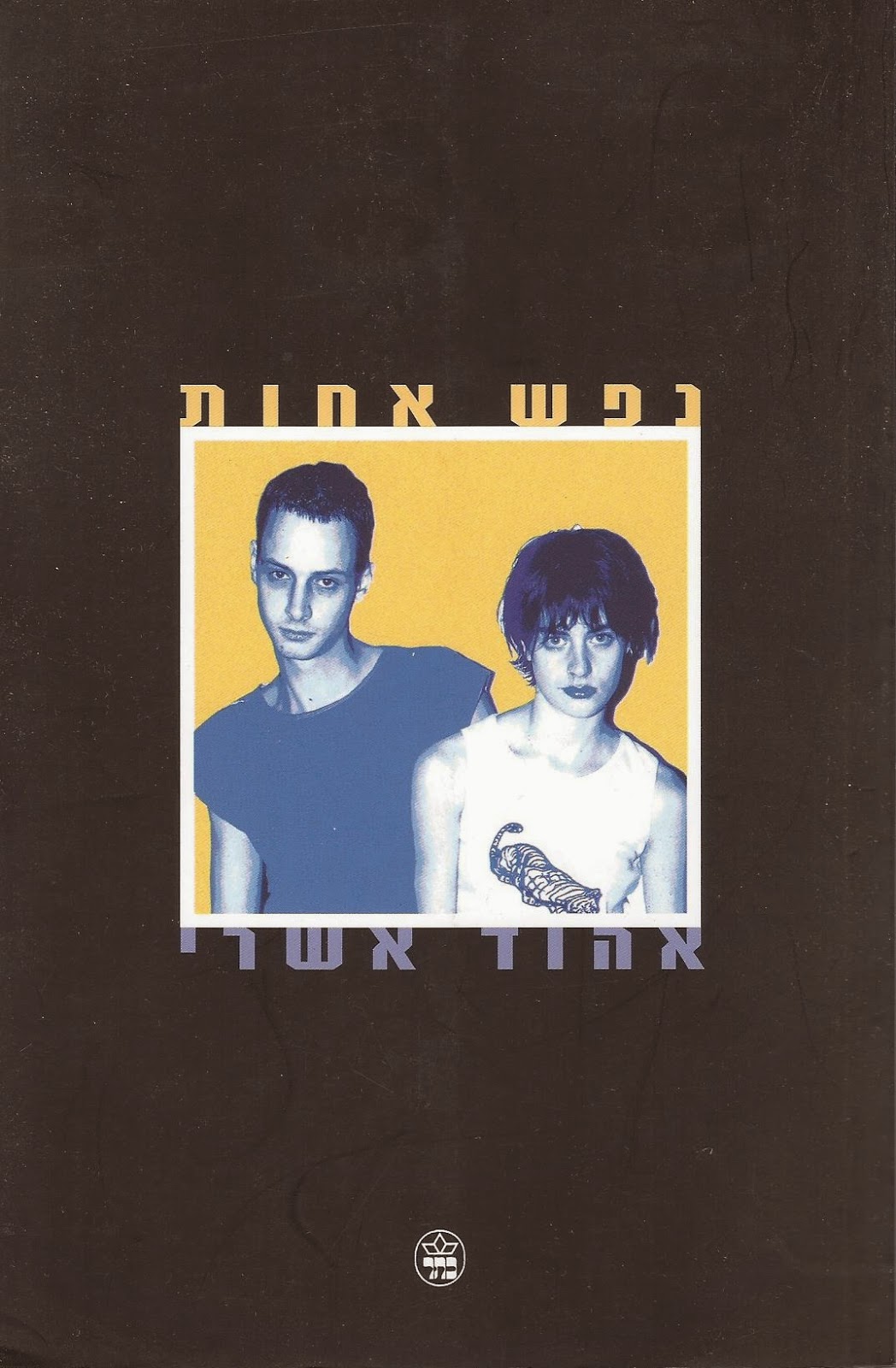 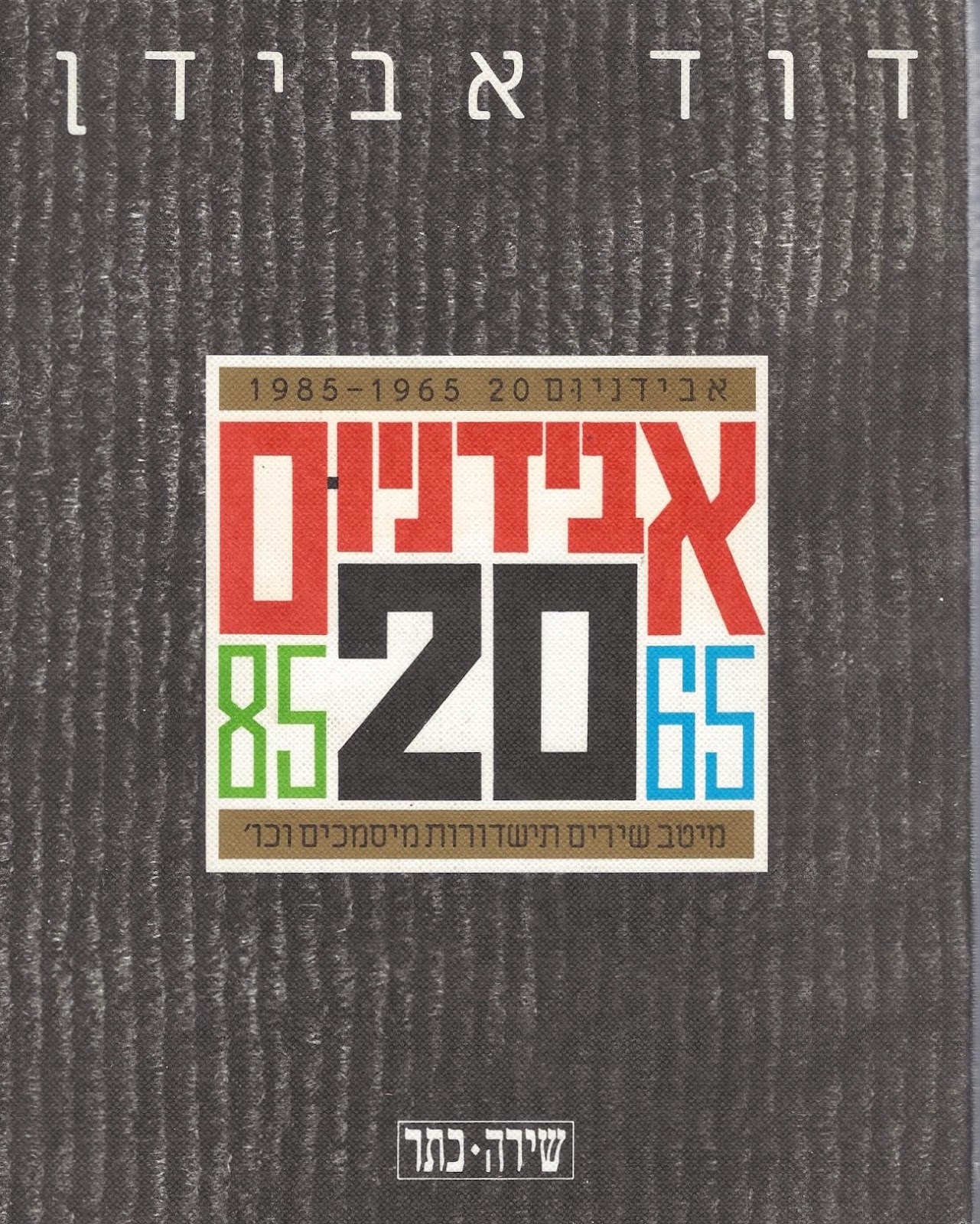 Avidan, David. Avidaniyum 20: metav shirim, tisdorot, mismakhim vekhu' 1965-1985/ Avidanium 20: Select Poems, Transmissions, Documents etc. 1965-1985. Jerusalem, Keter, 1987. Octavo, paper covers in dust jacket, 296 pp. Softbound. Very Good. Text is in Hebrew. (72838)     $25.00
David Avidan was one of the Israeli poets of the sixties and seventies who showed  great originality in their use of the Hebrew language. He was well known for the introduction of sexuality and drug imagery. He made a few films, but as time went by his financial impoverishment cause a physical decline. He still has not received anything like the acknowledgement that he deserves. 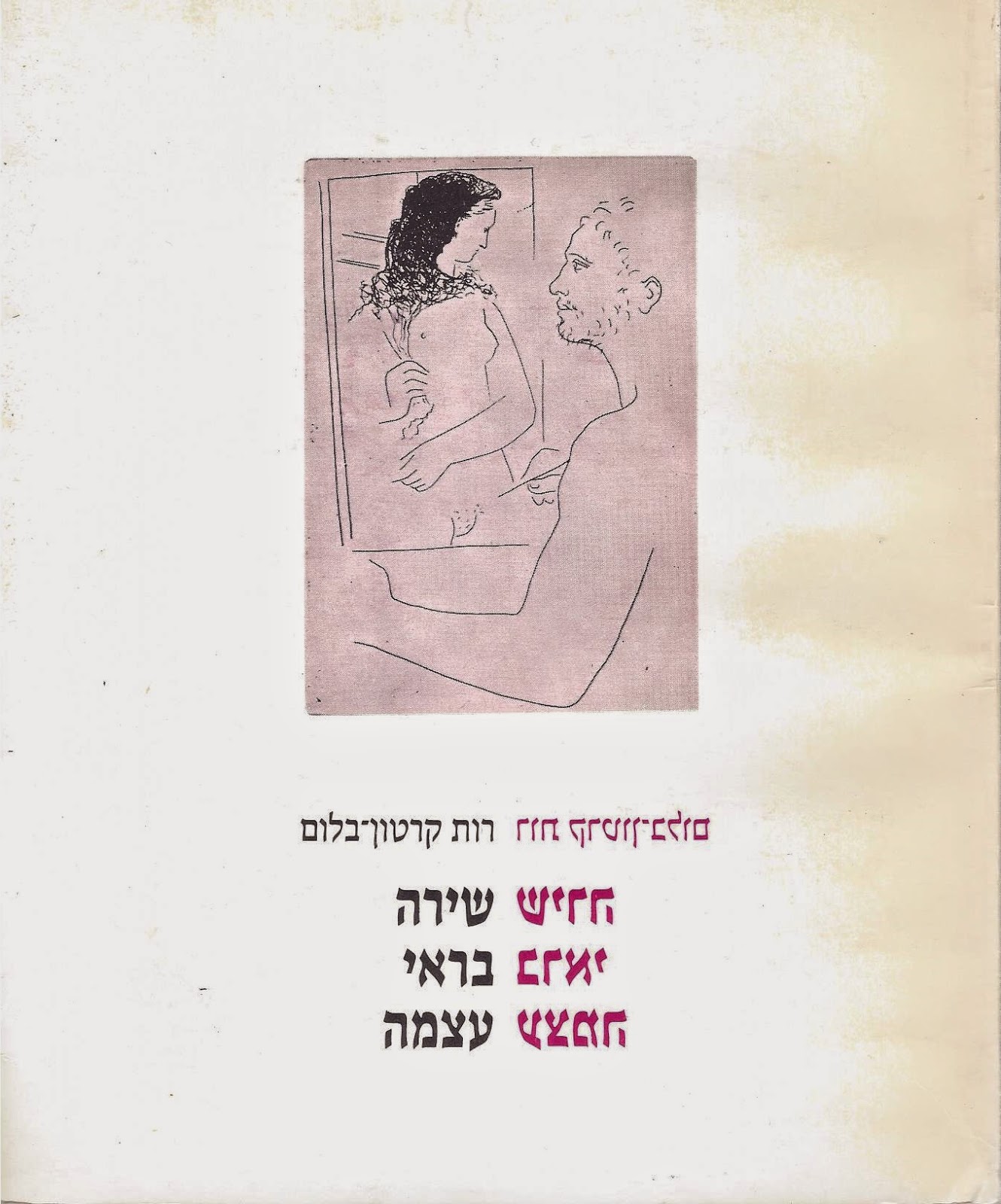 Kartun-Blum, Ruth, edited with notes and a foreword. Shirah bi-re'i Atsmah/ Poetry as its Own Mirror: An Anthology. Tel Aviv, Mosad Byalik, 1982. Octavo, paper covers with flaps, 95 pp. Softbound. Very Good. Text is in Hebrew. (72862)      $20.00
Kartun-Blum was educated in the US at UCLA (probably studying with Alan Mintz) and went on to become head of the literature department at Hebrew University. She is one of the figures that introduced modern critical theory and feminism into Israeli literary scholarship. She became an emeritus professor in 2006. 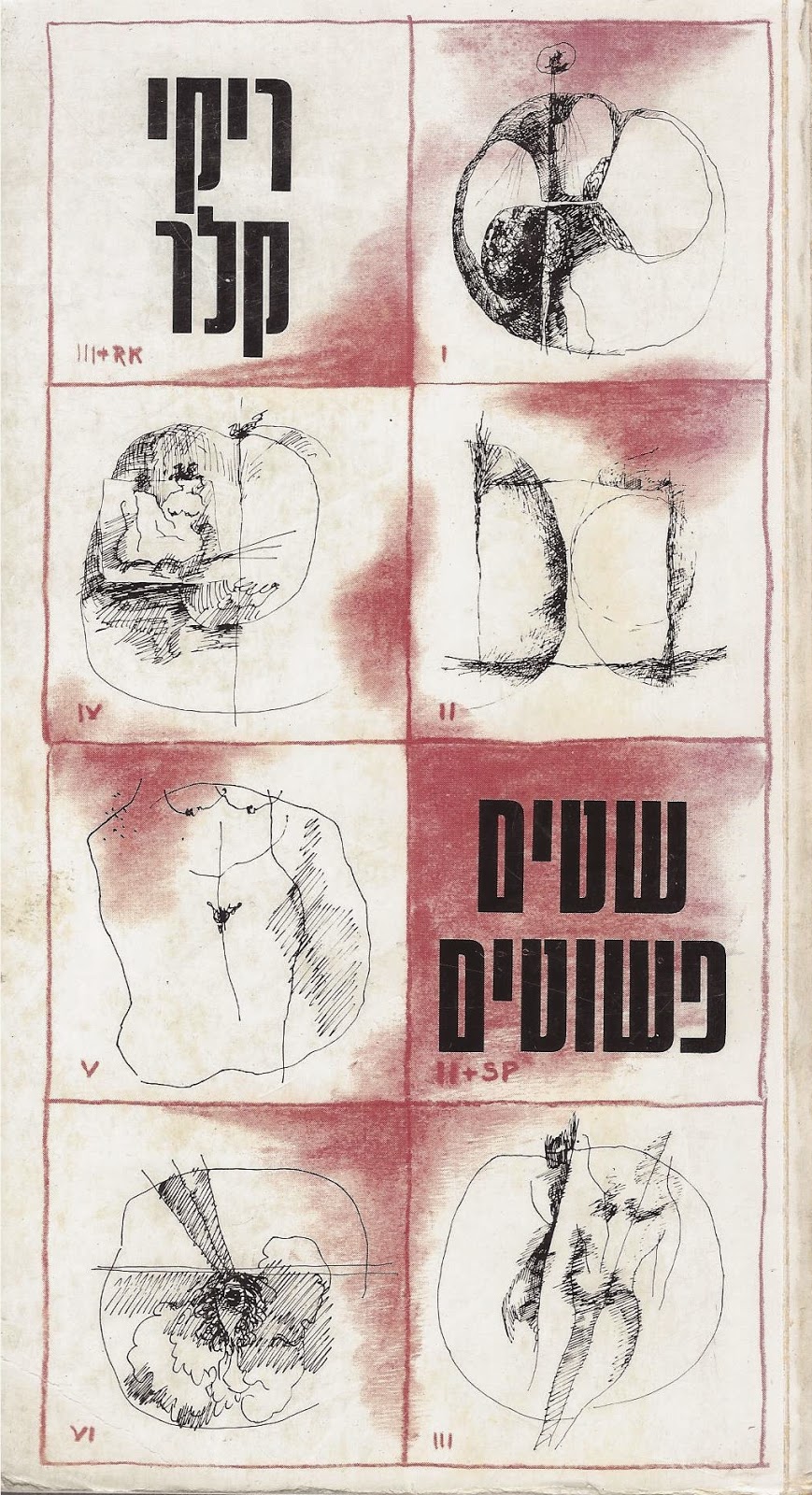 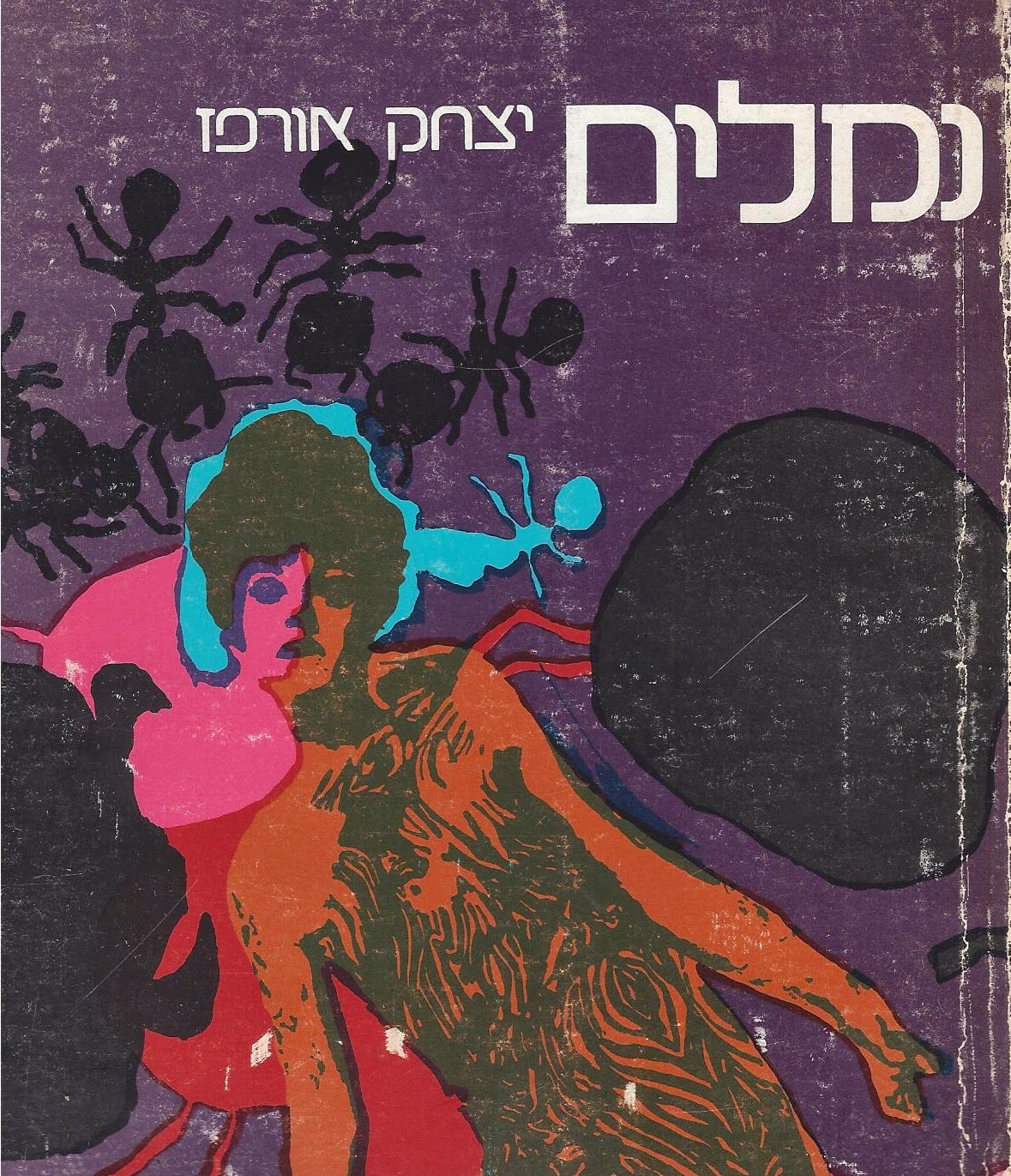 Orpaz, Yitshak. Nemalim/ Ants: a Novel. Tel Aviv, Am Oved, 1968. Duodecimo, paper covers with flaps, 104 pp. Hardbound. Very Good-. Text is in Hebrew. (72861)     $15.00
Orpaz immigrated from the Soviet Union in the Mandate period after fighting with British Forces. He did not publish his first novel until the late 1950s but still fits in with the Independence era writers. 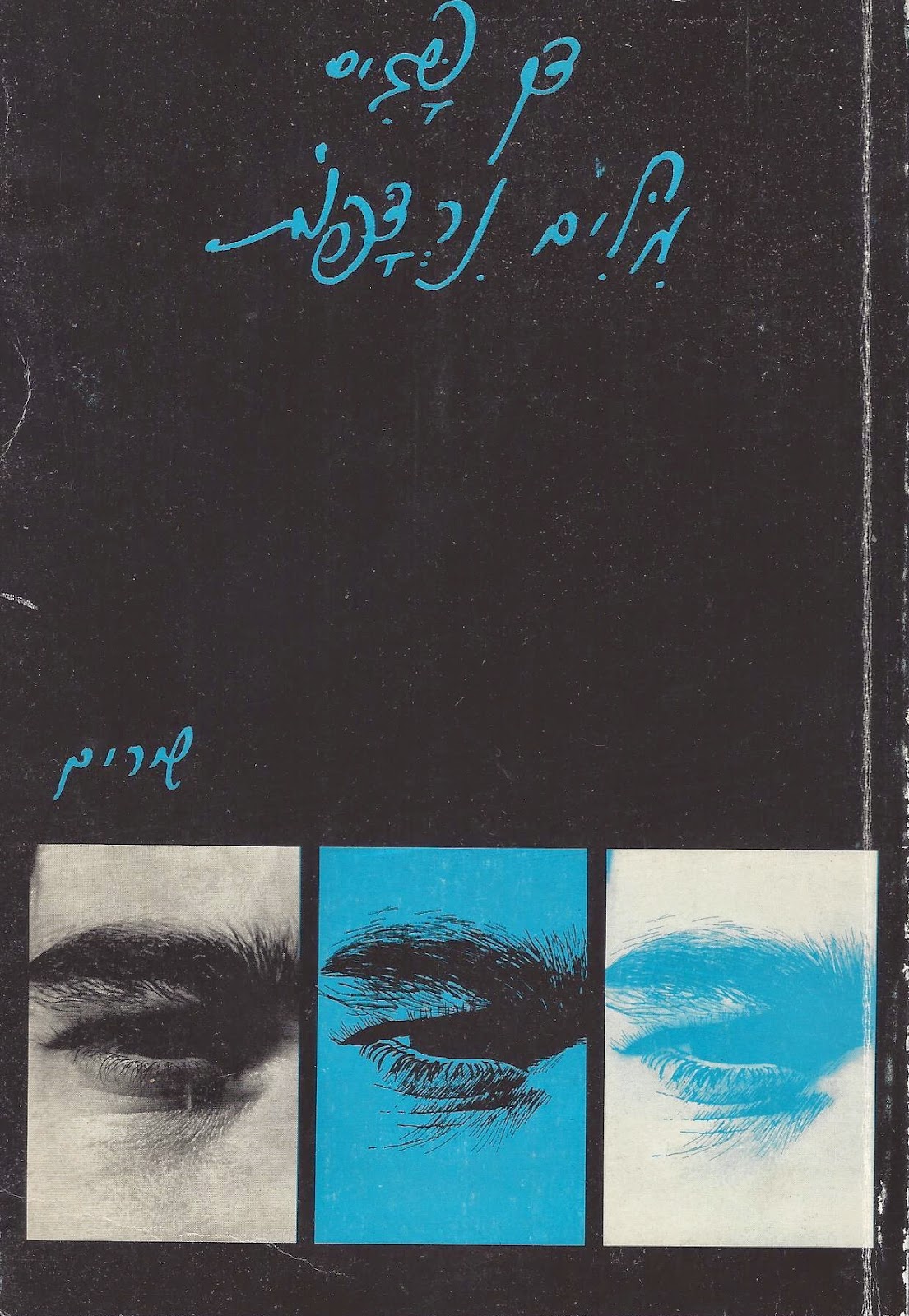 Pagis, Dan. Milim nirdafot: shirim/ Double Exposure. Tel Aviv, Ha-Kibuts Ha-Meuhad, 1982. Octavo, paper covers, 76 pp. Softbound. Very Good. Text is in Hebrew. (31898)     $20.00
Pagis is as well known for his own verse as he is for his studies in Medieval Hebrew poetry. He survived the holocaust in Romania before making aliyah. 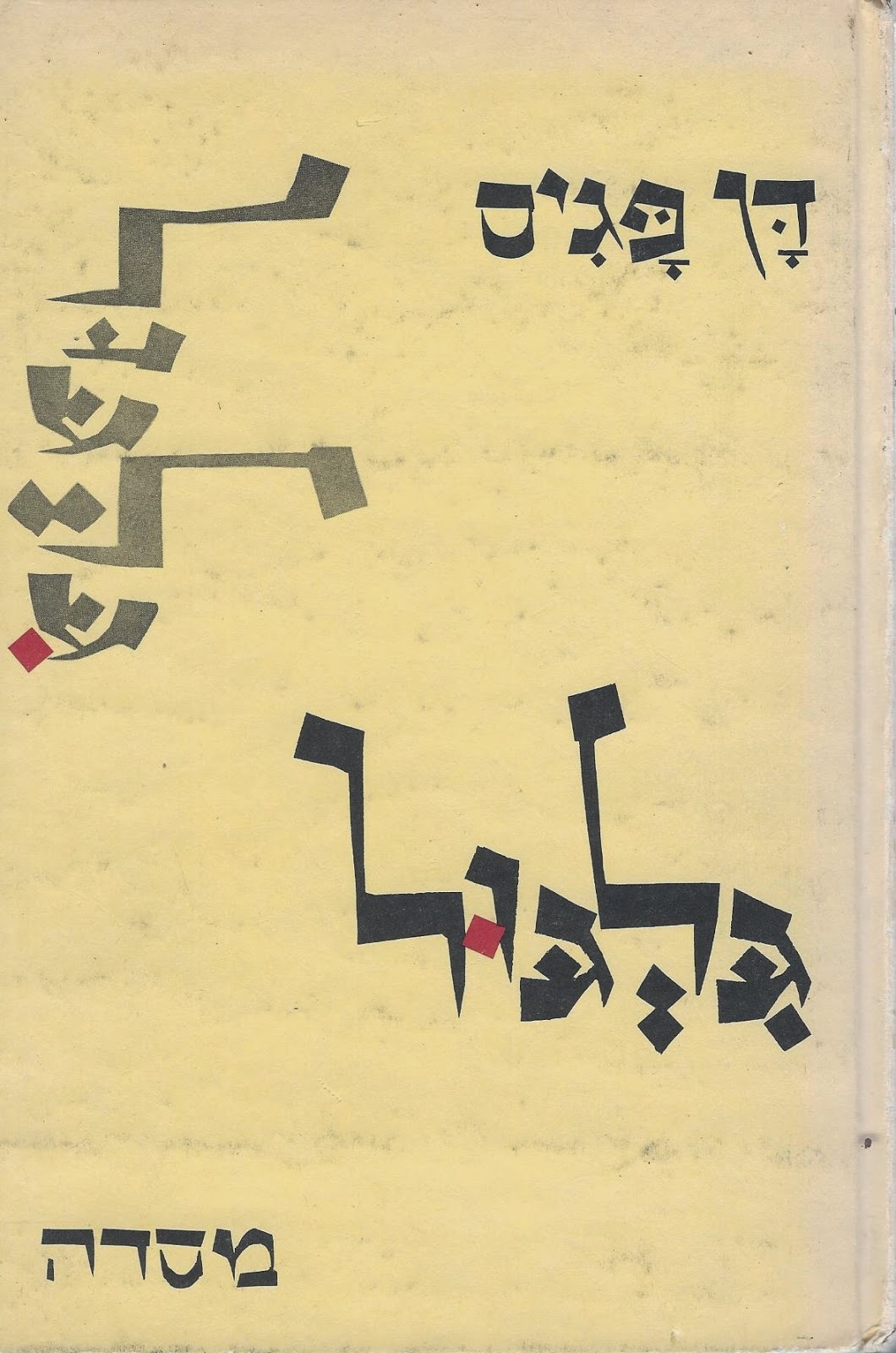 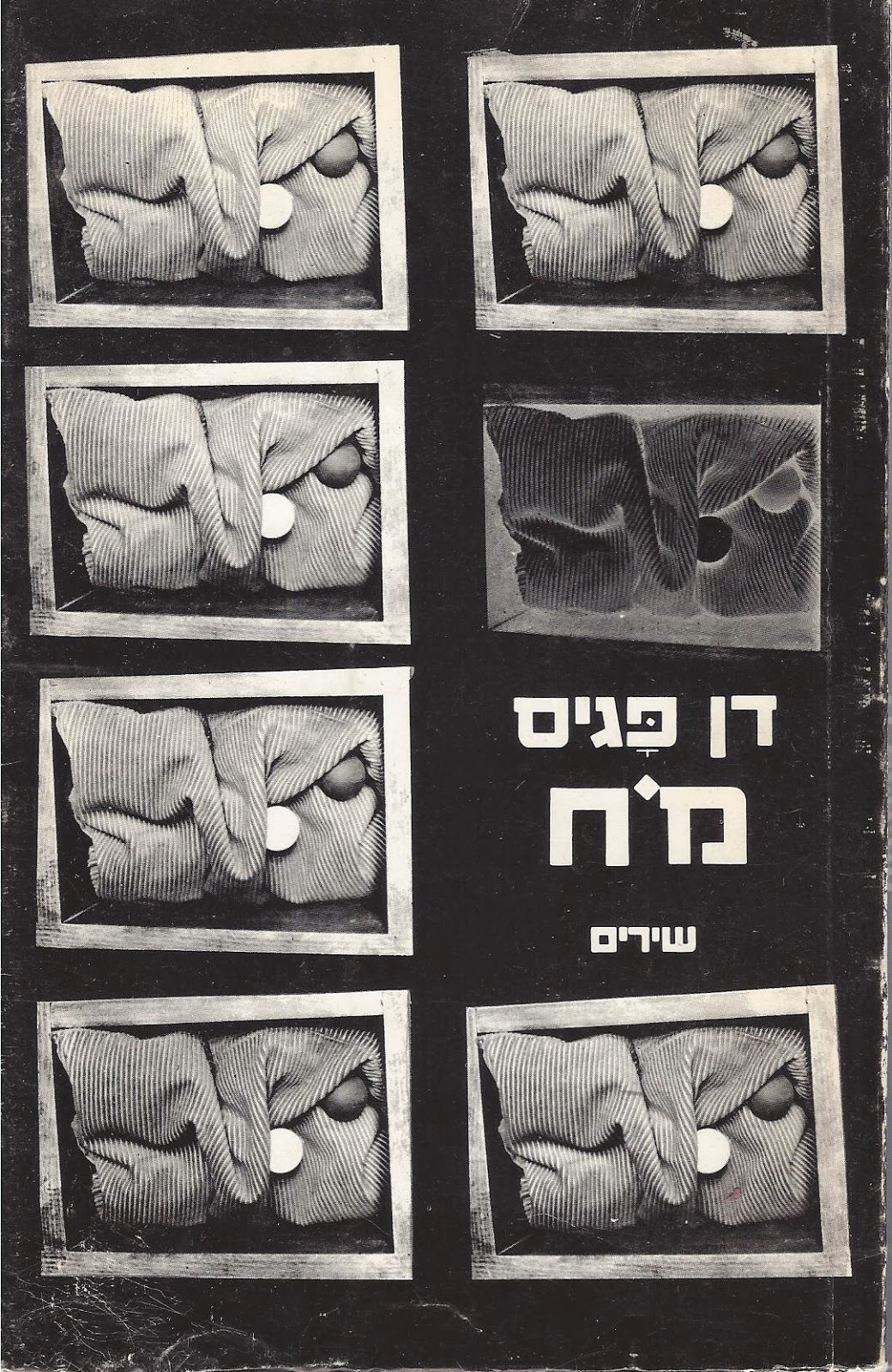 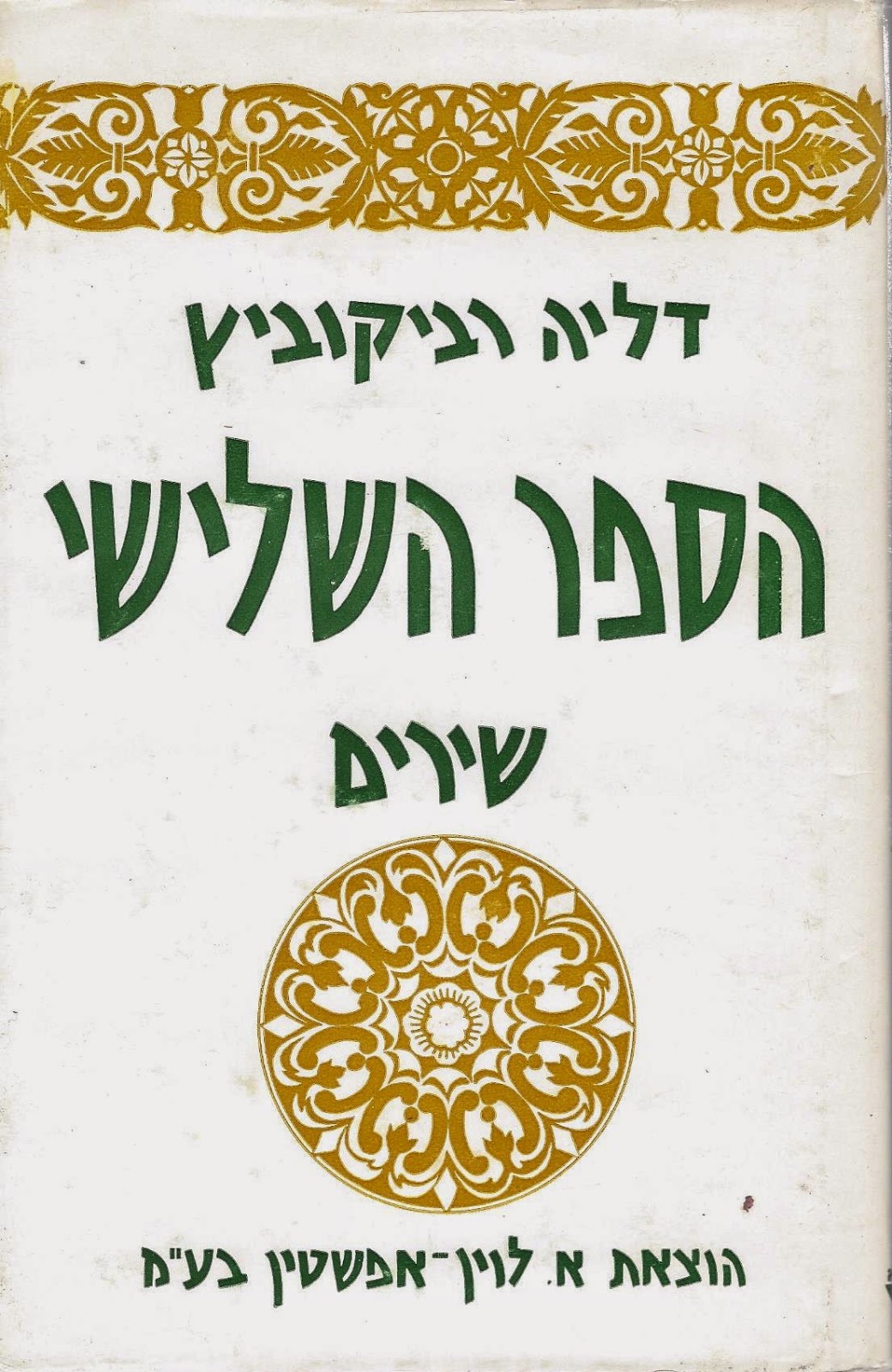 Ravikovitch, Dalia. Ha-Sefer ha-shelishi: shirim. Tel Aviv, Modan - A Levin-Epstein, c. 1969. Octavo in dust jacket, 64 pp. Hardbound. Very Good. Text is in Hebrew. (72878)     $25.00
An obituary from the Guardian does a fine job of summarizing the wide ranging career of Ravikovitch one on Israeli central poetic voices. 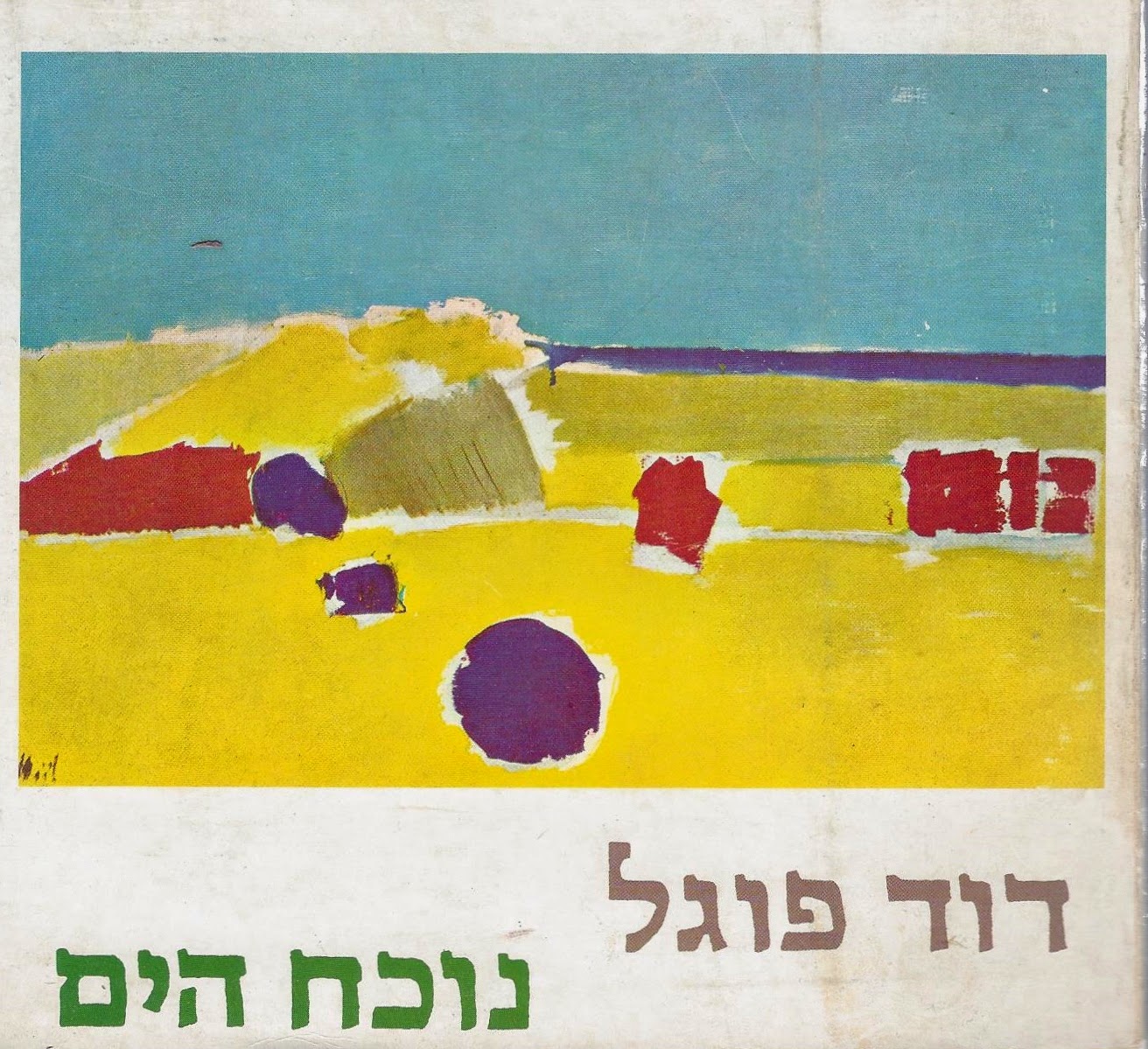 Vogel, David. Nokhah ha-yam: novelah/ Facing the Sea: Novella. Tel Aviv, M. Nyuman, 1974. Oblong small octavo, paper covers with flaps, 75 pp. Softbound. Very Good. Text is in Hebrew. (72860)     $18.00
Vogel, a Russian Jew, died in the holocaust. He wrote in both Hebrew and Yiddish. This particular work was originally composed during the time that he was interned by the French as an Austrian citizen. 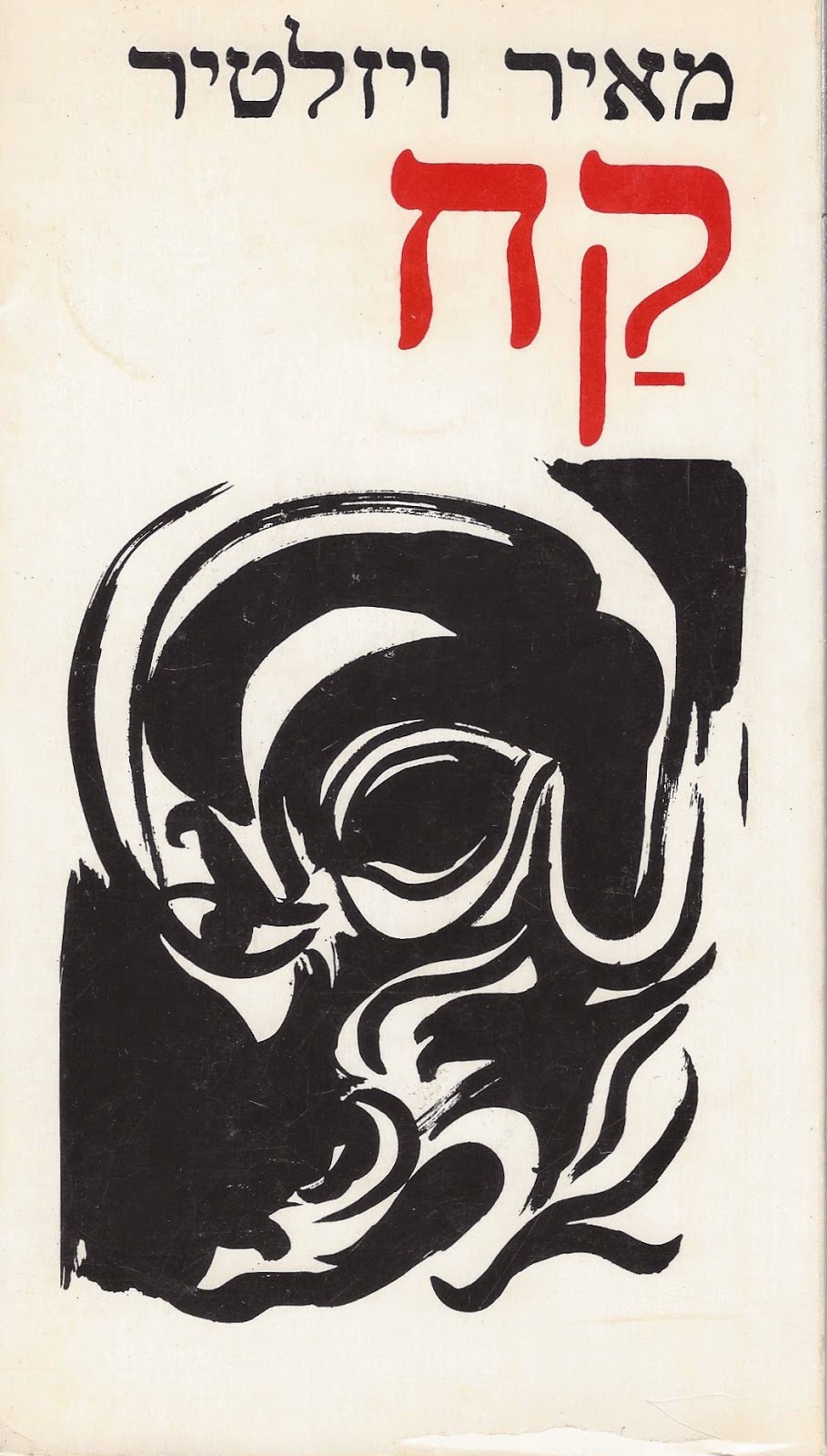 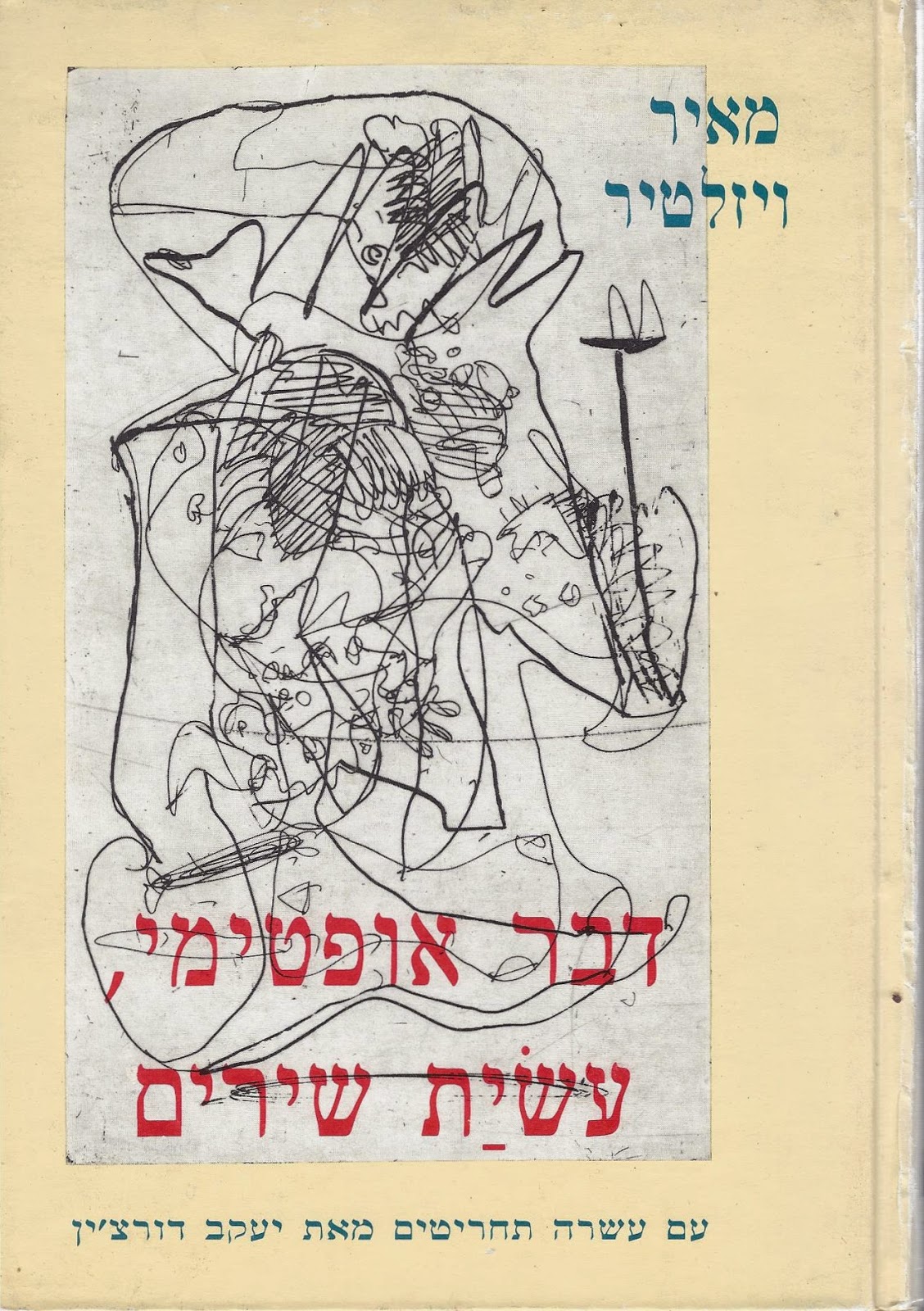 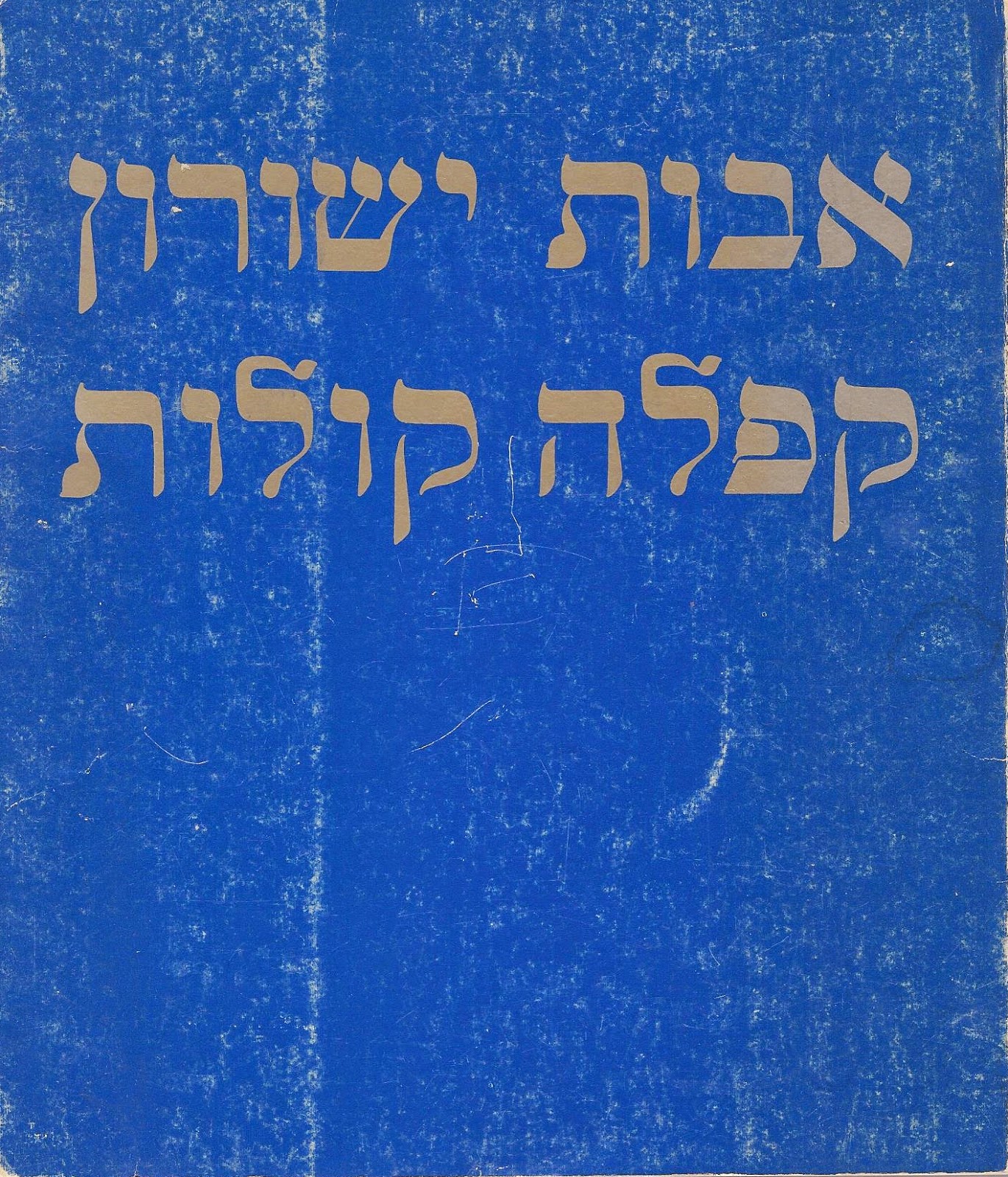 Yeshurun, Avot. Kapelah kolot: shirim/ Kapela Kolot: Poems. Tel Aviv, Sifre Siman Kriyah, 1977. Squarish octavo, shelf-worn paper covers with flaps, 119 pp. Hardbound. Very Good. Text is in Hebrew. (72872)     $25.00
Yeshurun (Yehiel Perlmutter) was born in the Ukraine in 1904 and made aliyah in 1925. His original language was Yiddish. His writing in Hebrew never abandoned his early Yiddish and came to include the Arabic and the slang of Mandate Palestine as well. He employed his own neologisms and mashed words together. His approach was a thorough modernism. He lost the remainder of his European family in the holocaust and experienced a pervasive guilt thereafter. 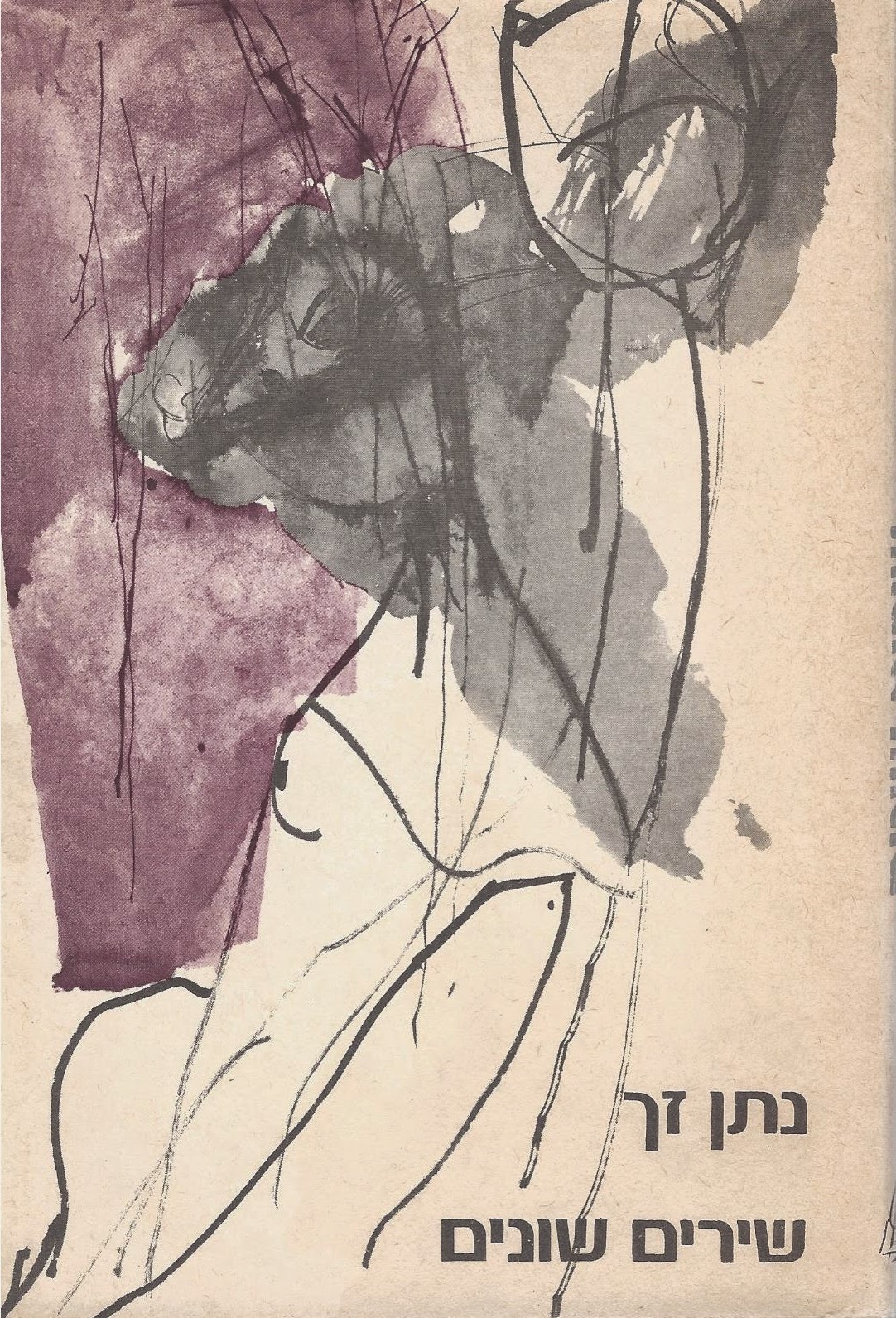 Zakh, Natan [Zack, Nathan]. Shirim shonim. Jerusalem, Ha-Kibuts Ha-Meuhad, 1974. Small octavo, paper covers with flaps, 128 pp.  Softbound. Very Good. Text is in Hebrew. (72808)   $18.00
Zack emigrated from Germany as a child in 1936. He was another major figure in Israeli Modernism. He innovated Hebrew rhyme and meter introducing new ideas from outside the Hebrew language. He was an active translator of a more forward-looking selection of foreign authors. He edited the poetry journal Akhshav. Your hapless bookseller happened into a small bookshop off of Rabin Square in Tel Aviv with the bookseller's professor brother and found the bookseller engaged a jovial conversation with an older man in an easy-chair by the counter. The bookseller's brother grabbed the bookseller by the neck of his shirt and dragged him to the back of the shop in order to inform the bookseller that the old fellow was Natan Zack and that the bookseller had better keep his mouth shut and not embarrass the professor. Just one more encounter with greatness for the bookseller.
Posted by Henry Hollander, Bookseller at 12:09 AM