A selection of Yiddish literary works and translations of world literature into Yiddish along with a few scholarly items. 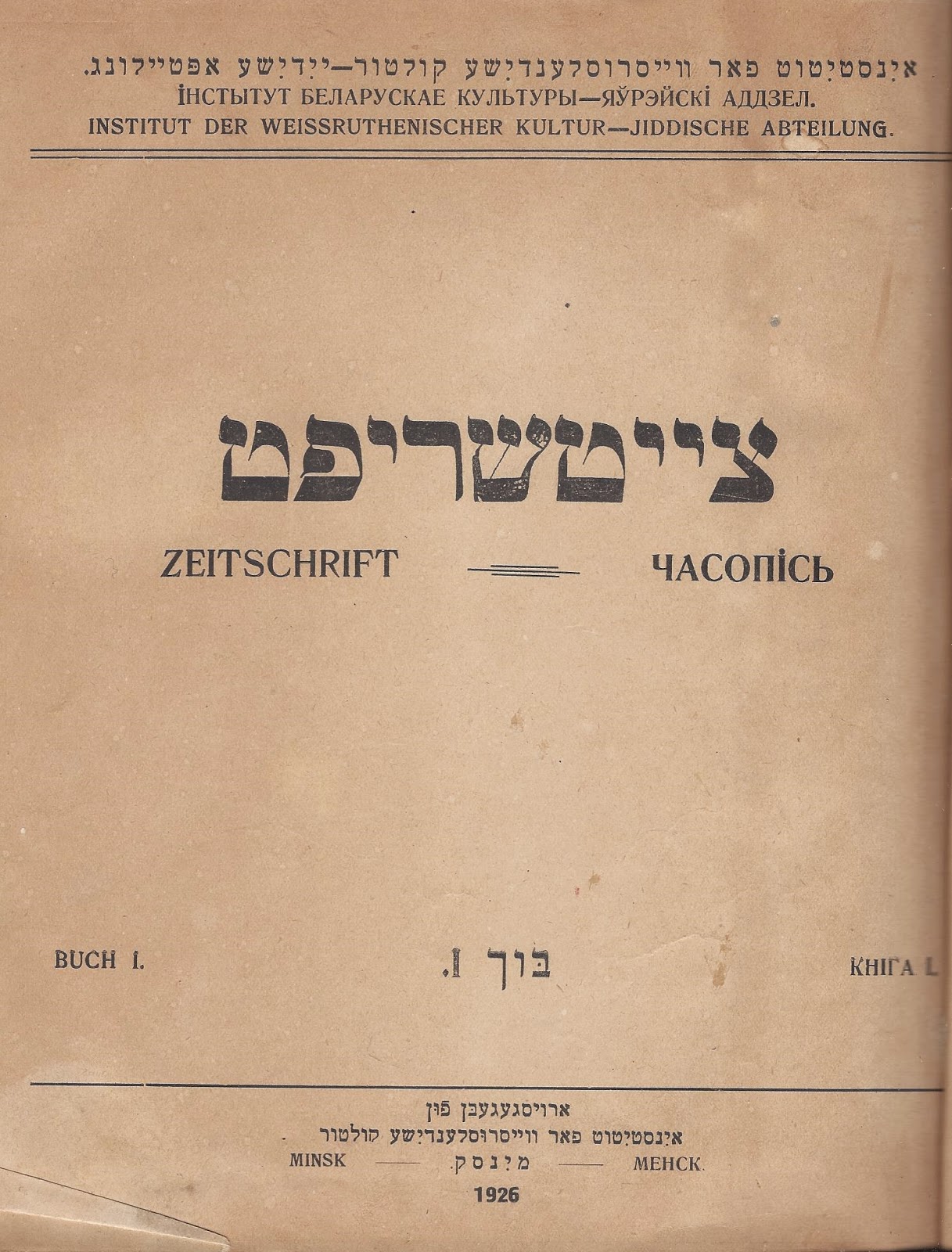 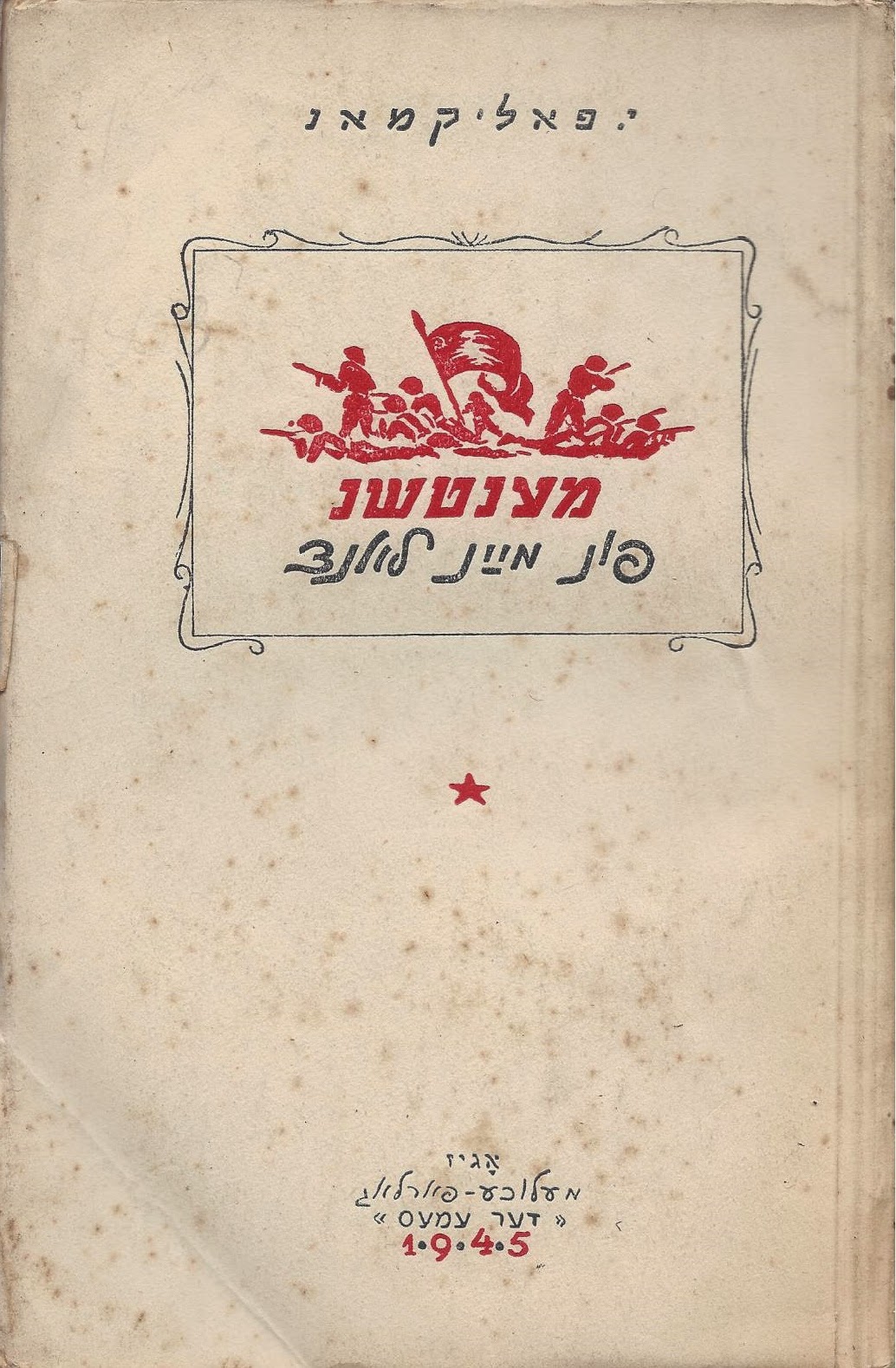 Falikman, Y[ehiel]. Mentshn fun mayn land: dertseylungen. Moscow, Ogiz, Melukhe-Farlag "Der Emes", 1945. Octavo, paper covers, 168 pp. Softbound. Very Good. Text is in Yiddish in the Soviet Orthography. Falikman was a somewhat straight-ahead Soviet author. Early on he spent a little time on the Birobidzhan. He did write on the Holocaust to the extent that it was possible within the Soviet system. His novels published in Yiddish up through 1953. He continued to appear in Yiddish periodicals after the Thaw and Russian translations of his novels also appeared in that period. His support for the Soviet anti-Zionist campaign in the post 1967 era is indicative of his accession to the Soviet system.  (45638)      $45.00 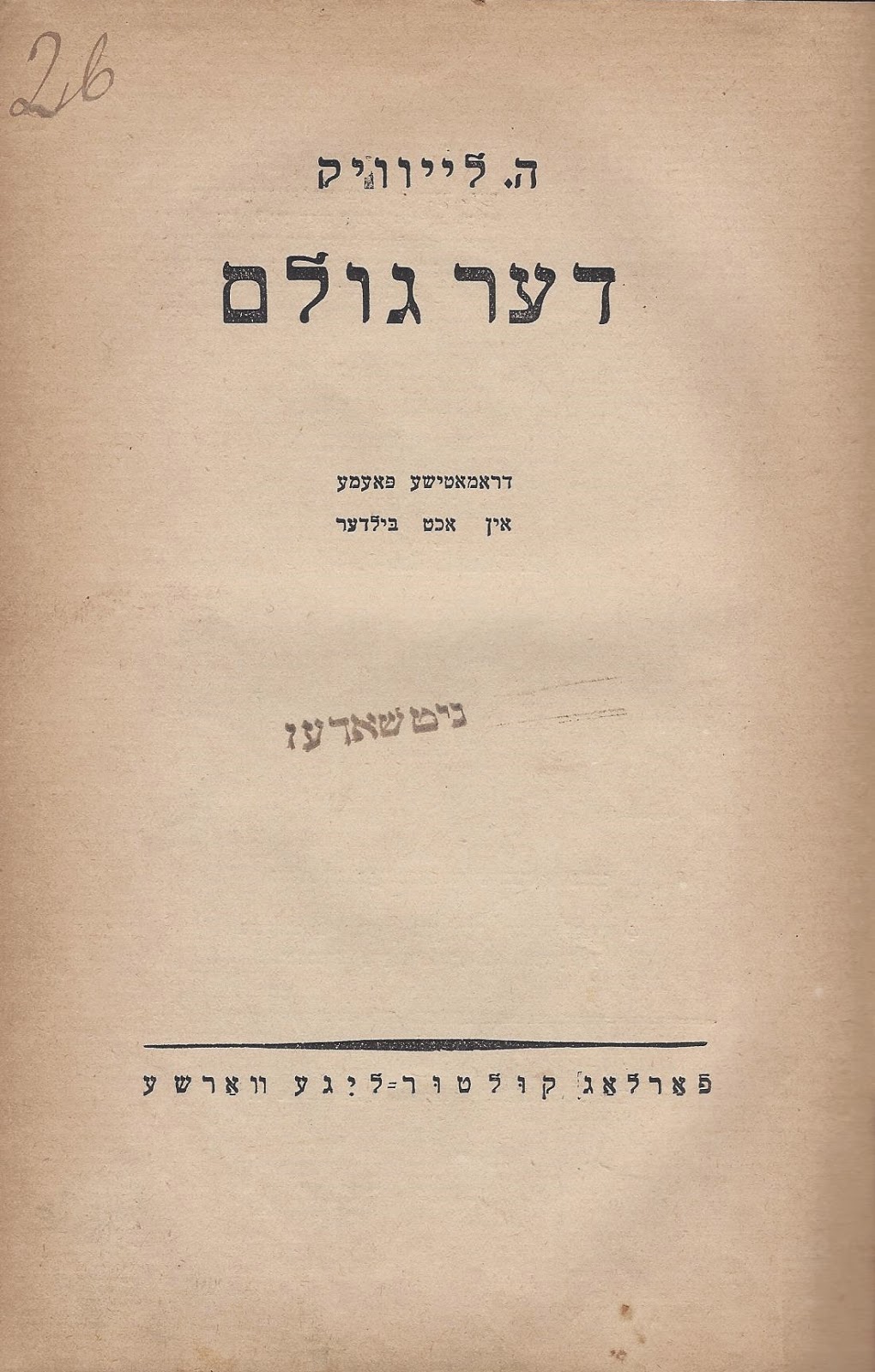 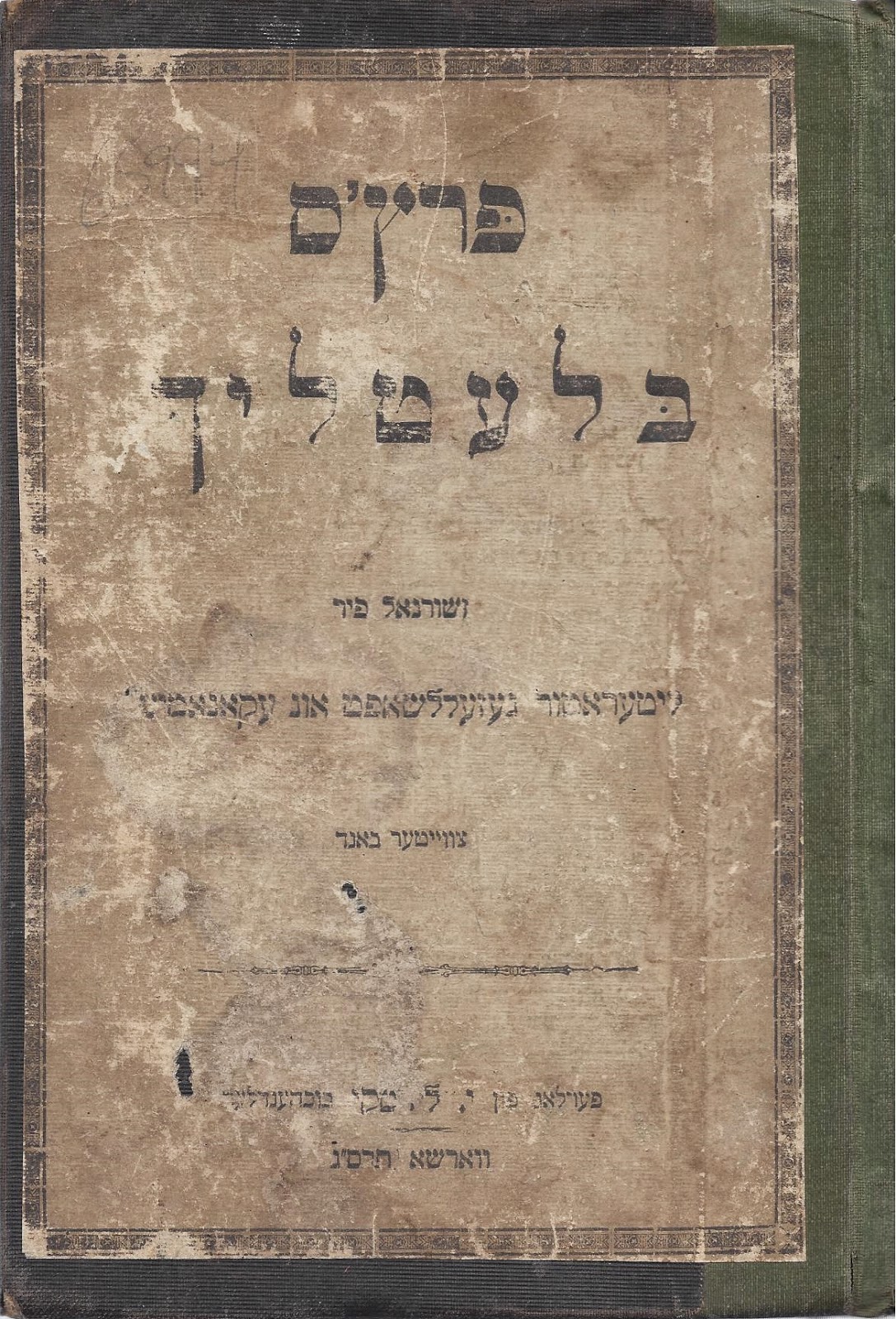 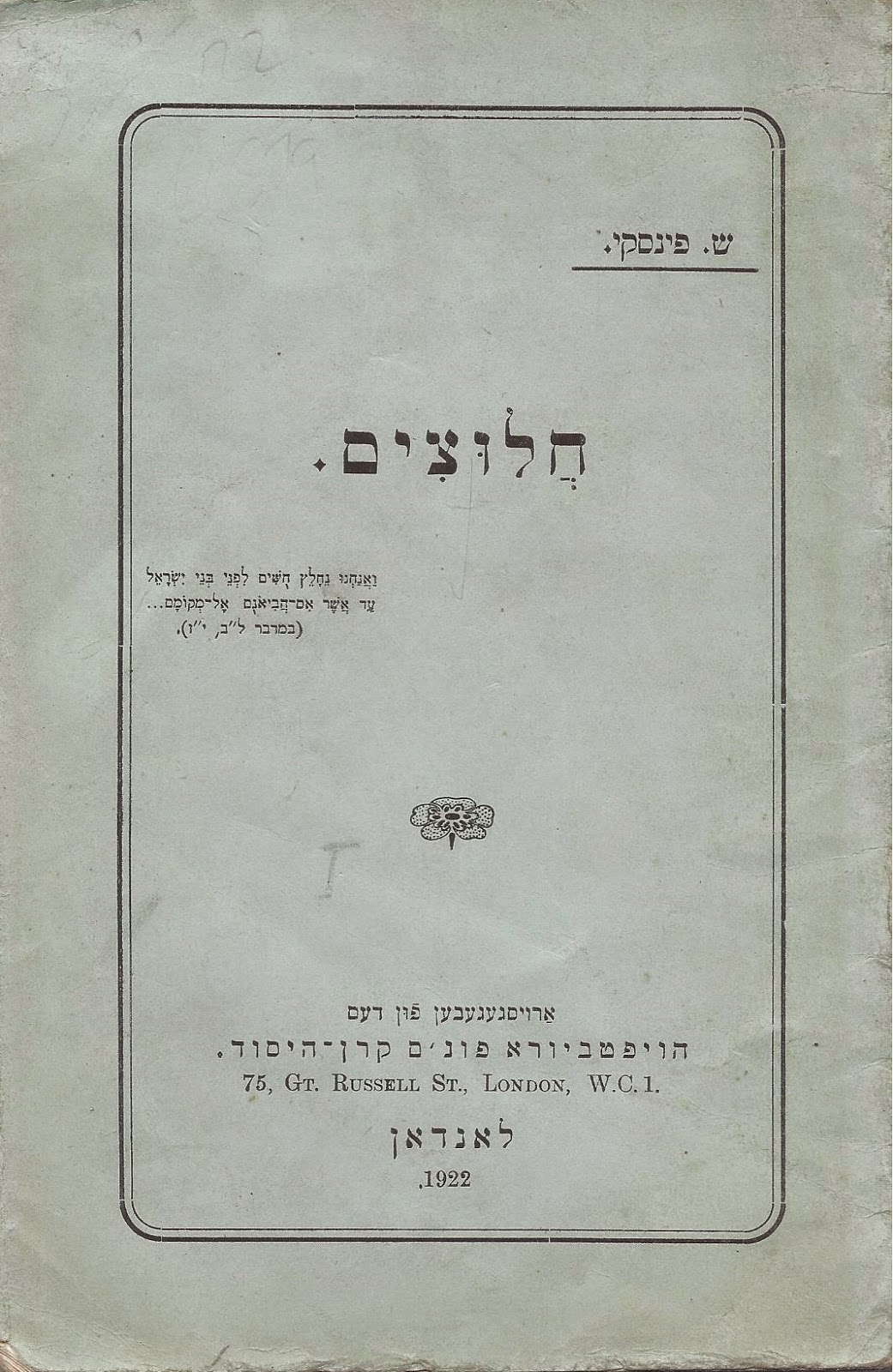 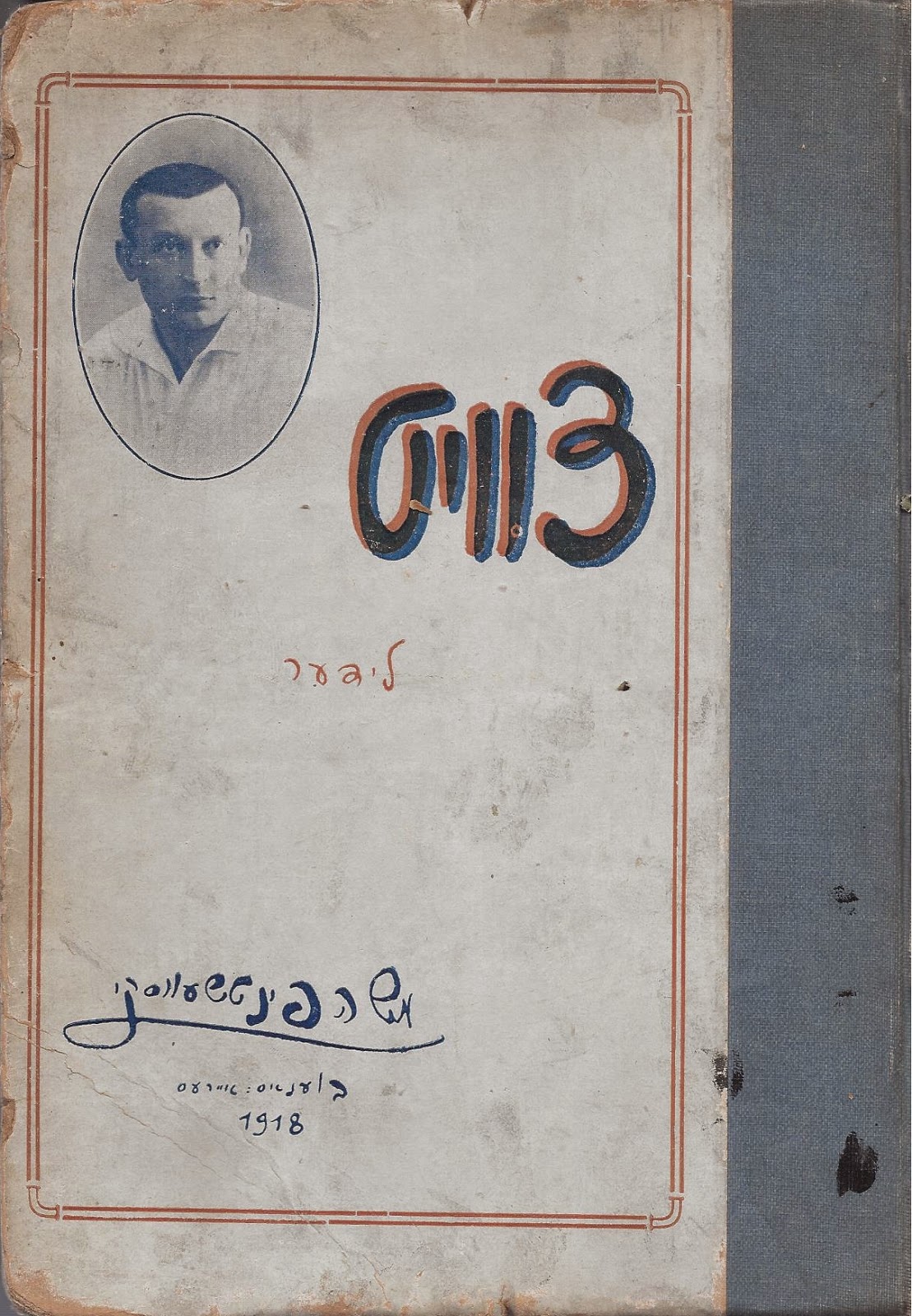 Pintshevski, Mosheh. Tsveyt: lider. Buenos Aires, 1918. Octavo, soiled light blue cloth spine, illustrated paper covered boards with a vignette photo of the author, 132 pp., with some weakness to the hinges and general looseness, wear to the edges of a few of the pages.  Hardbound. Good. One of the first twenty-five books published in Yiddish in Argentina. The first Yiddish book published in Argentina was 'Estatuten fun der aktsyen gezelshaft" from the Fondo Komunal" fun Kolonye Klara. There were some pieces of music and periodicals that preceded this work. (66555)      $75.00 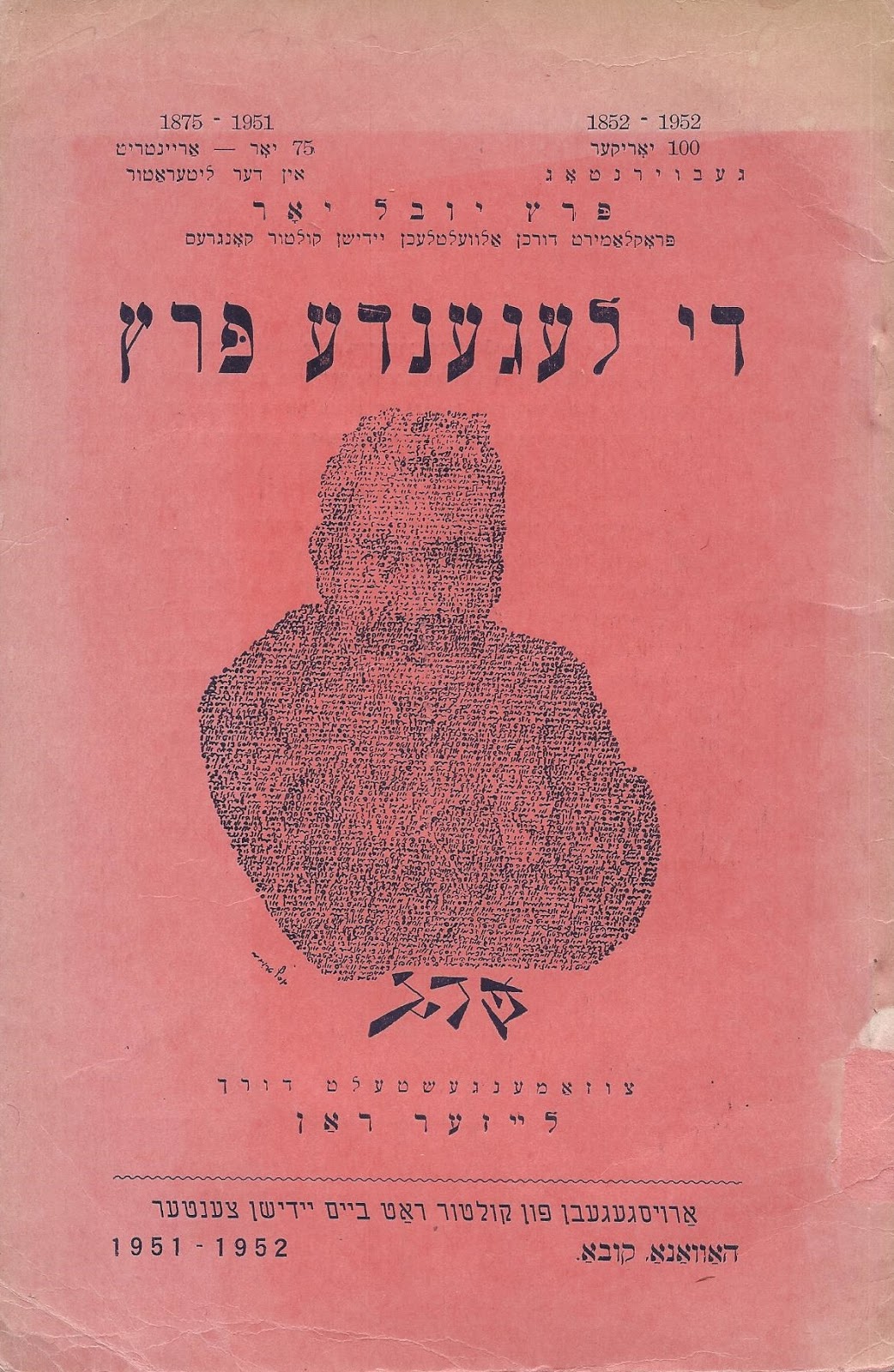 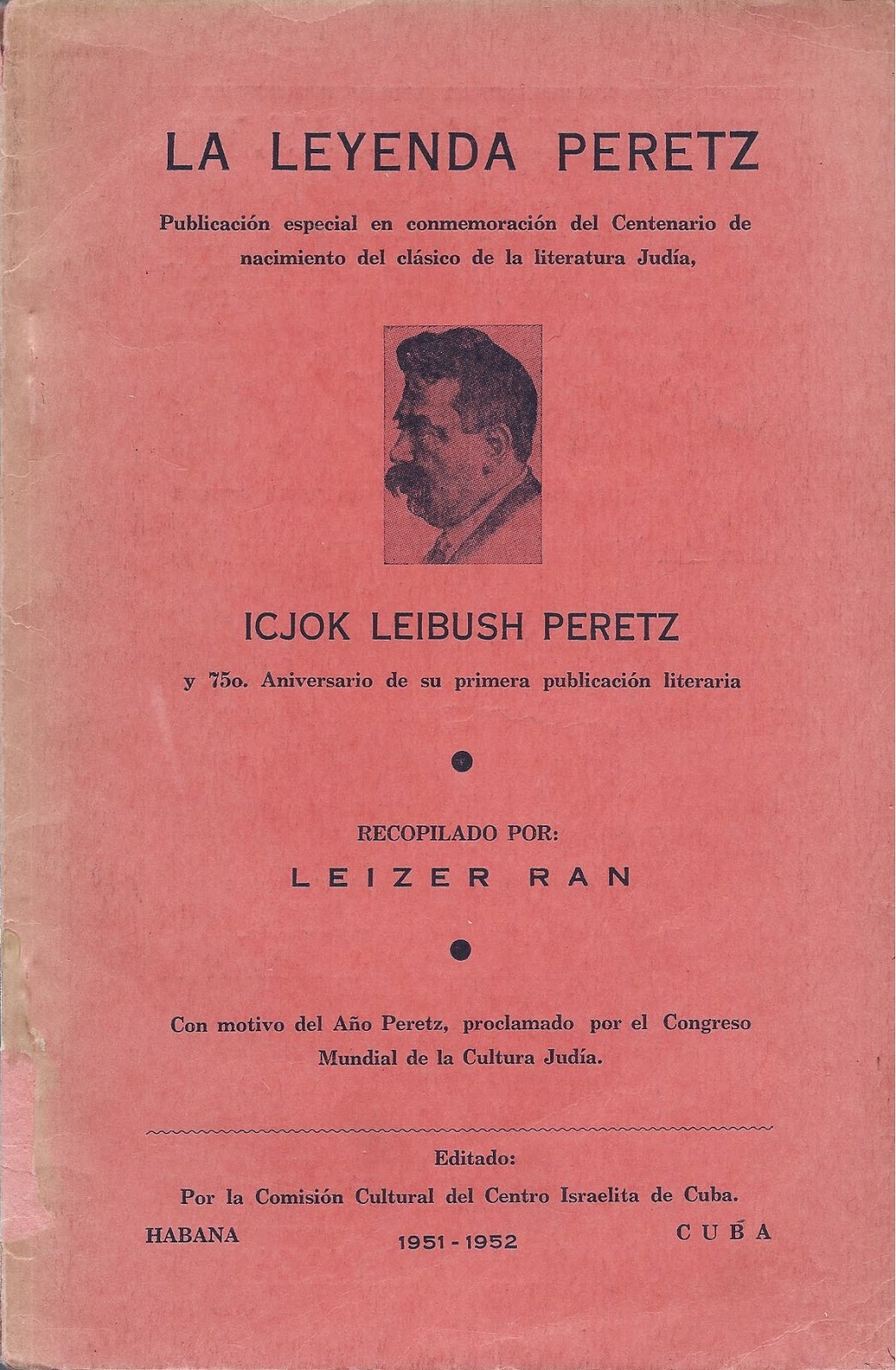 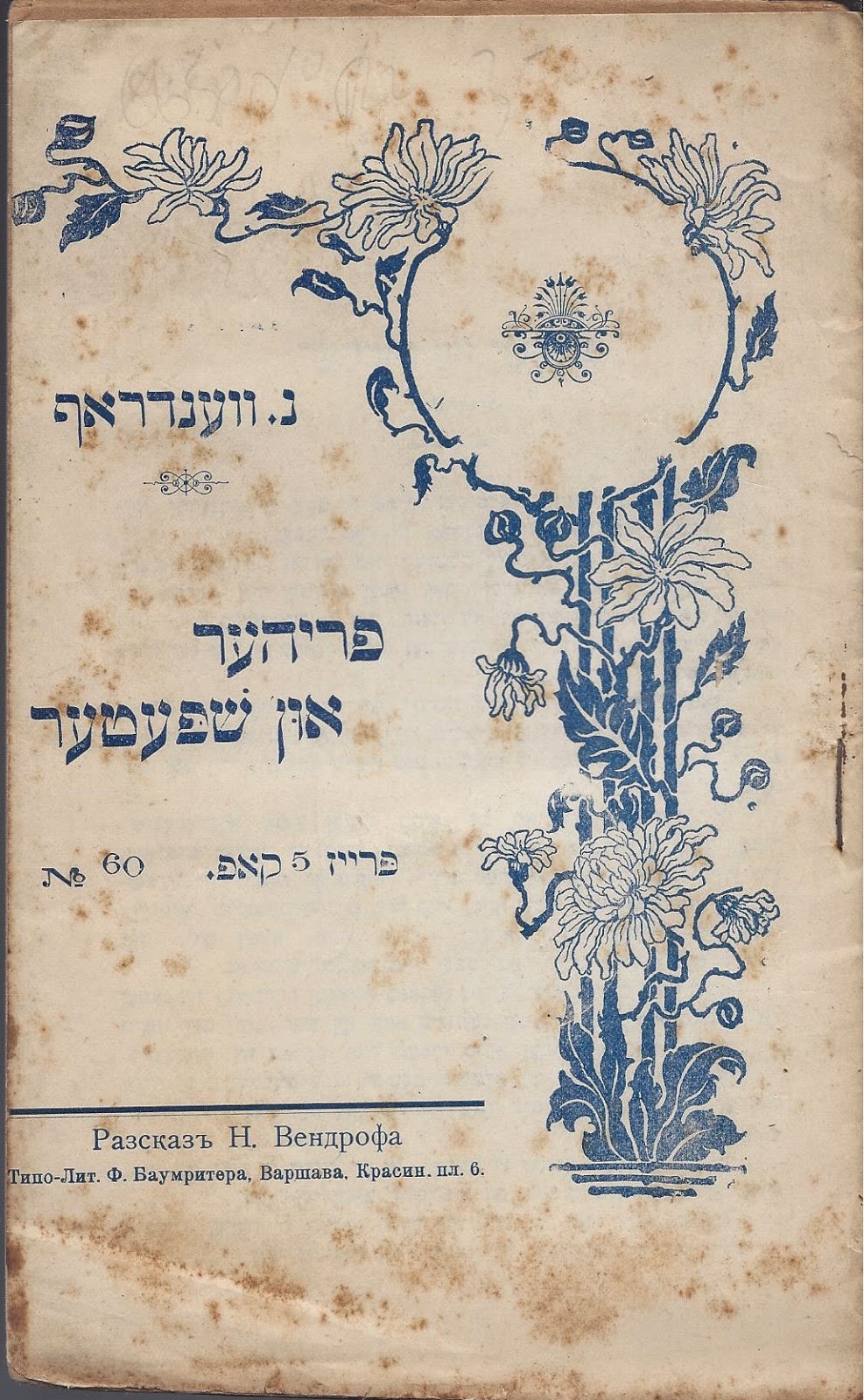 Vendrof, N [Zalman Wendroff]. Friher un shpeter. Warsaw, Familyen-bibliyotek, Between 1909 and 1912. Duodecimo, stapled paper covers, 20 pp., yellowed paper. Softbound. Good. In Yiddish. Juvenalia by one of the best Soviet Yiddish story-tellers. Wendroff who became a successful writer in the Soviet era when he was able to avoid the authorities and the gulag. His last book published before his death came at the twilight of the thaw period. Proof of his popularity can be found in the 1980 publication of another of his novels in Moscow in 1980. (66580)      $45.00 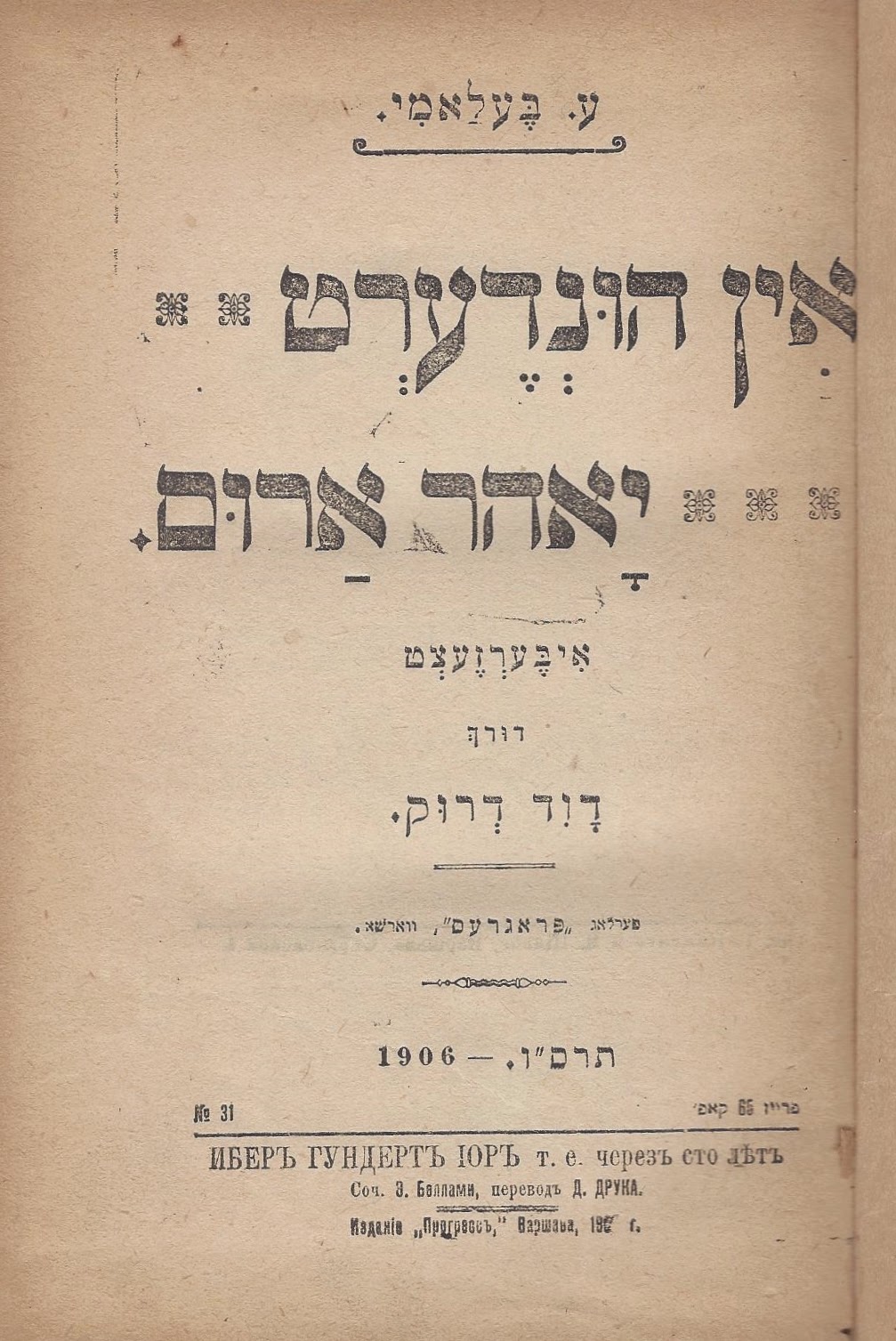 Bellamy, E. In hundert Yohr Arom. Warsaw, Ferlag "Progres", 1906. Small octavo, black  cloth with faded gold lettering, 207 pp., yellowed paper. Hardbound. Very Good. Translated into Yiddish by David Druk. Bellamy was an American socialist and novelist. Looking Backward 2000-1887, was originally published in 1888. It was one of the most successful novels of the Nineteenth Century and inspired a group of "Nationalist Clubs," with the goal of achieving some of the achievements that Bellamy had projected. In hundert Yohr Arom is one of the only works of speculative fiction to appear in Yiddish with the exception of the multi-volume set of Jules Verne works. (66608)      $35.00 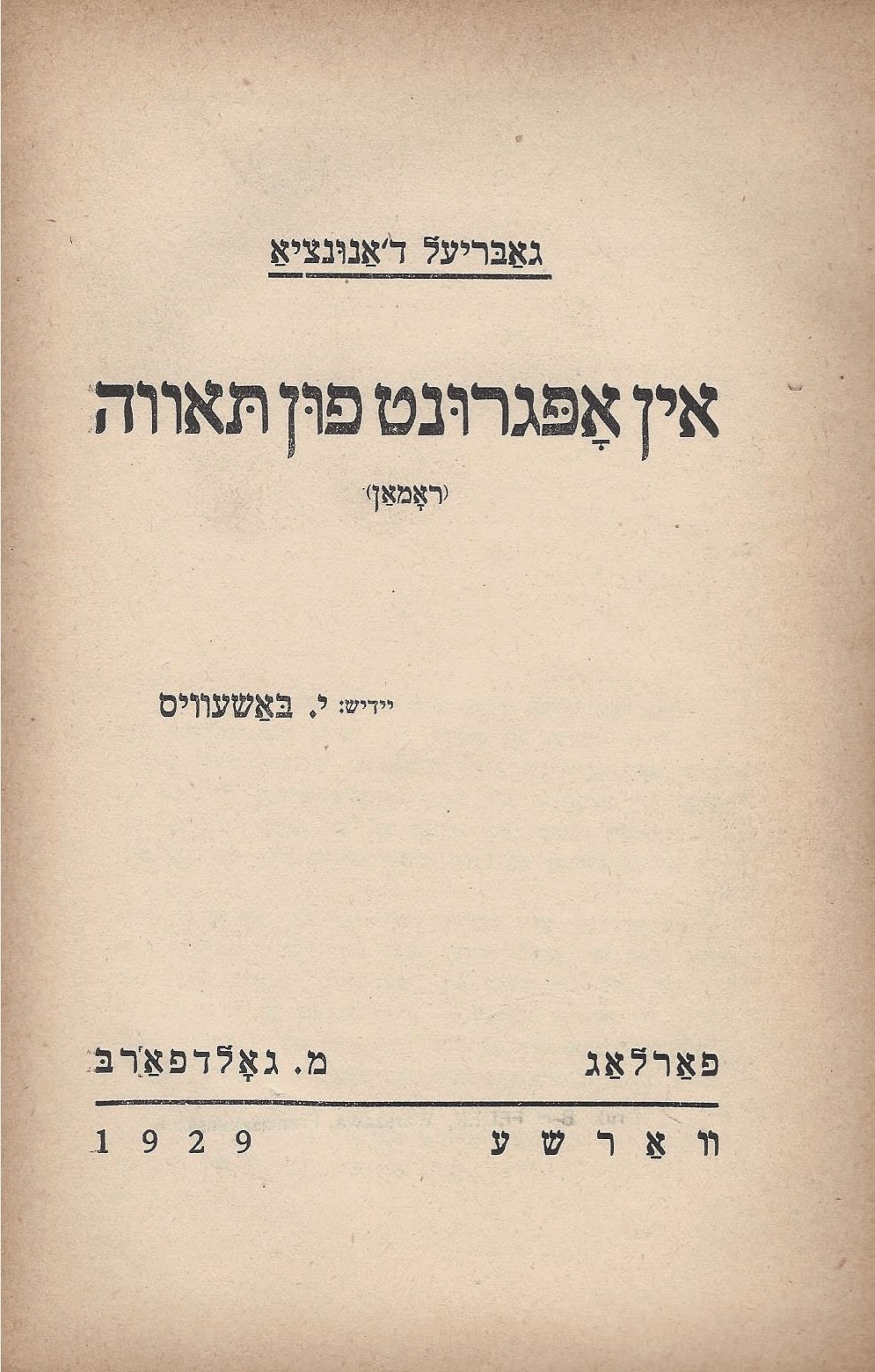 D'Annunzio, Gabriele [Singer, Isaac Bashevis]. In opgrunt fun tayve: (roman). Warsaw, Farlag M. Goldfarb, 1929. Small octavo, purple cloth with gold lettering, 264 pp., hinges cracking at the gutters, mildly yellowed paper. Hardbound. Good. Translated into Yiddish by "Y. Bashevis [Isaac Bashevis Singer]." Item C3 in Miller's Bashevis Bibliography. A translation of the novel Il Piacere (Pleasure), 1884. Miller believes Singer based his translation on an earlier translation from Italian into German by Maris Gagliardi in 1920. D' Annunzio was an unusual character. Of noble birth and endowed with talent from his earliest days D'Annunzio's style was both mystical and decadent. He was an extreme Italian Nationalist and an inspiration in part for Mussolini's brand of Fascism. Singer also translated Knut Hamsun, another talented author who eventually found a home in fascism. An odd coincidence of history. Uncommon. (45579)      $250.00 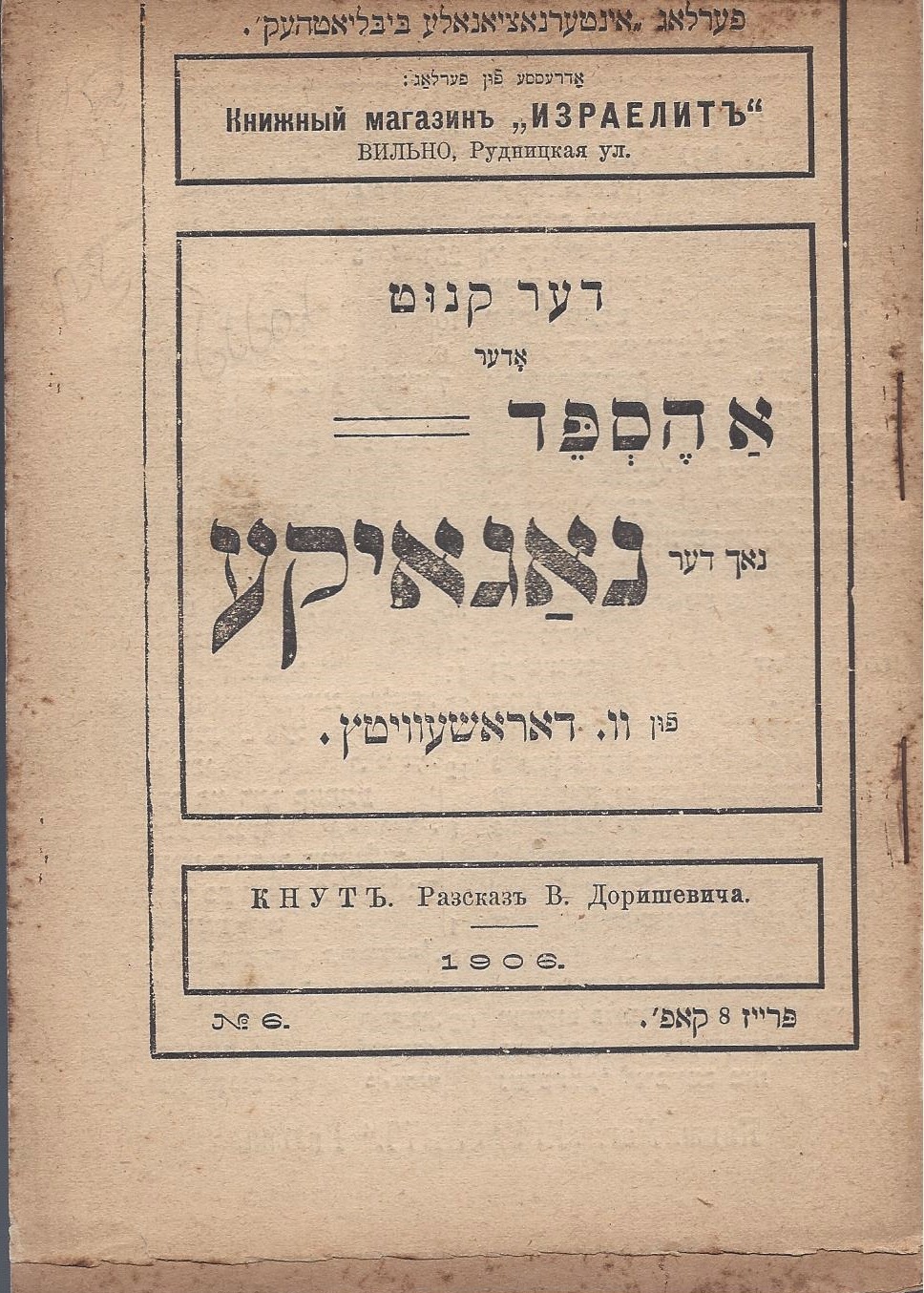 Doroshevich, V. M. Der knut, oder, A hesped nokh der nagayke. Vilna, Ferlag 'Internatsionale bibliothek', 1906. 16mo, stapled paper covers, 15, ii pp., ads, yellowed paper. Softbound. Very Good-. Translated from the original Russian into Yiddish. Uncommon. Doroshevich wrote about Sakhalin and the Russian Far East. He was a successful and popular journalist. He was the product of a marriage between an heiress to a wealthy family and poor writer. She was disinherited because of the marriage. Doroshevich spent some time as a manual laborer early on and identified with the masses. He approved of the Bolshevik revolution and was considered on the right side of it. (66606)     $50.00 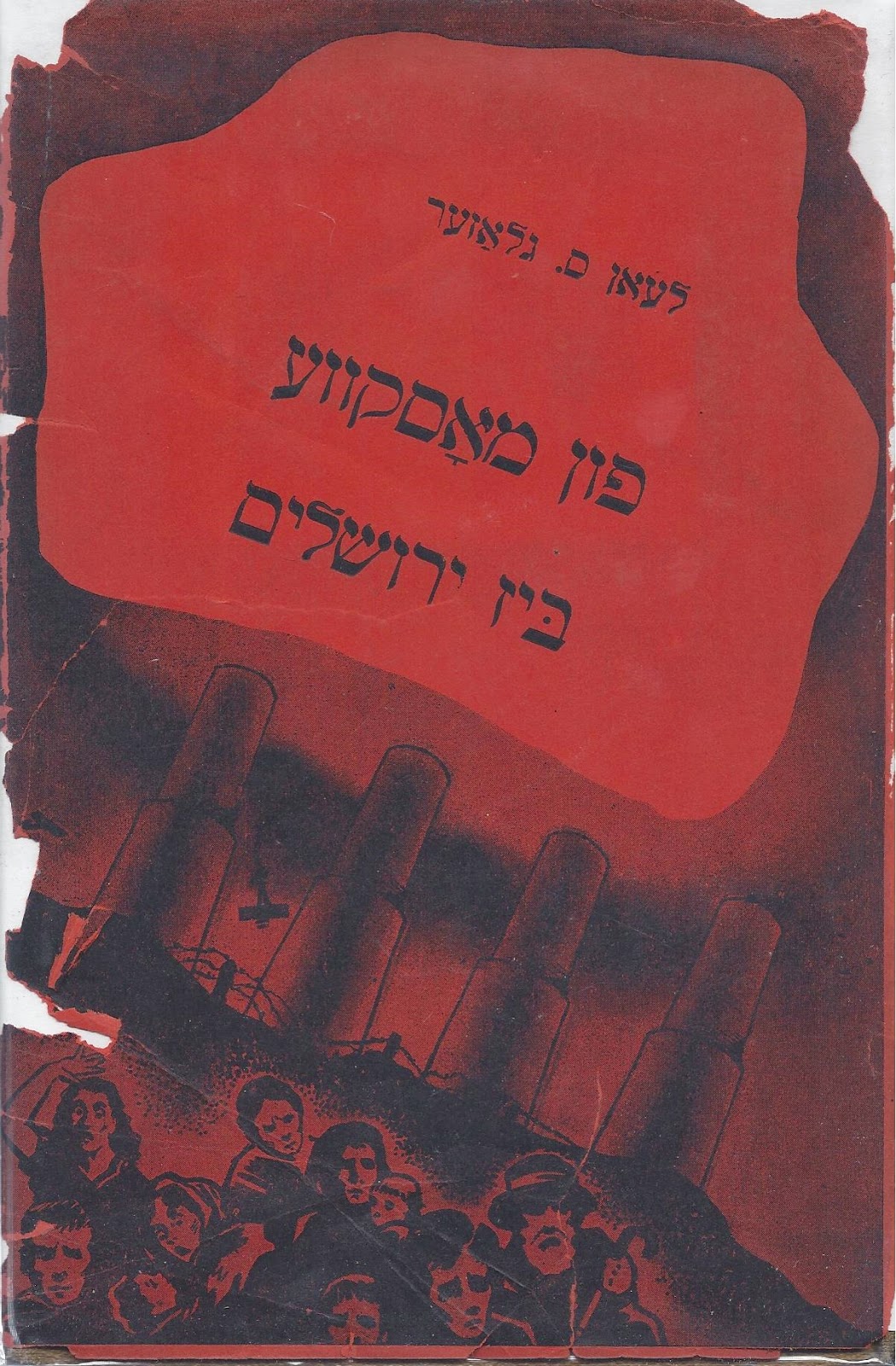 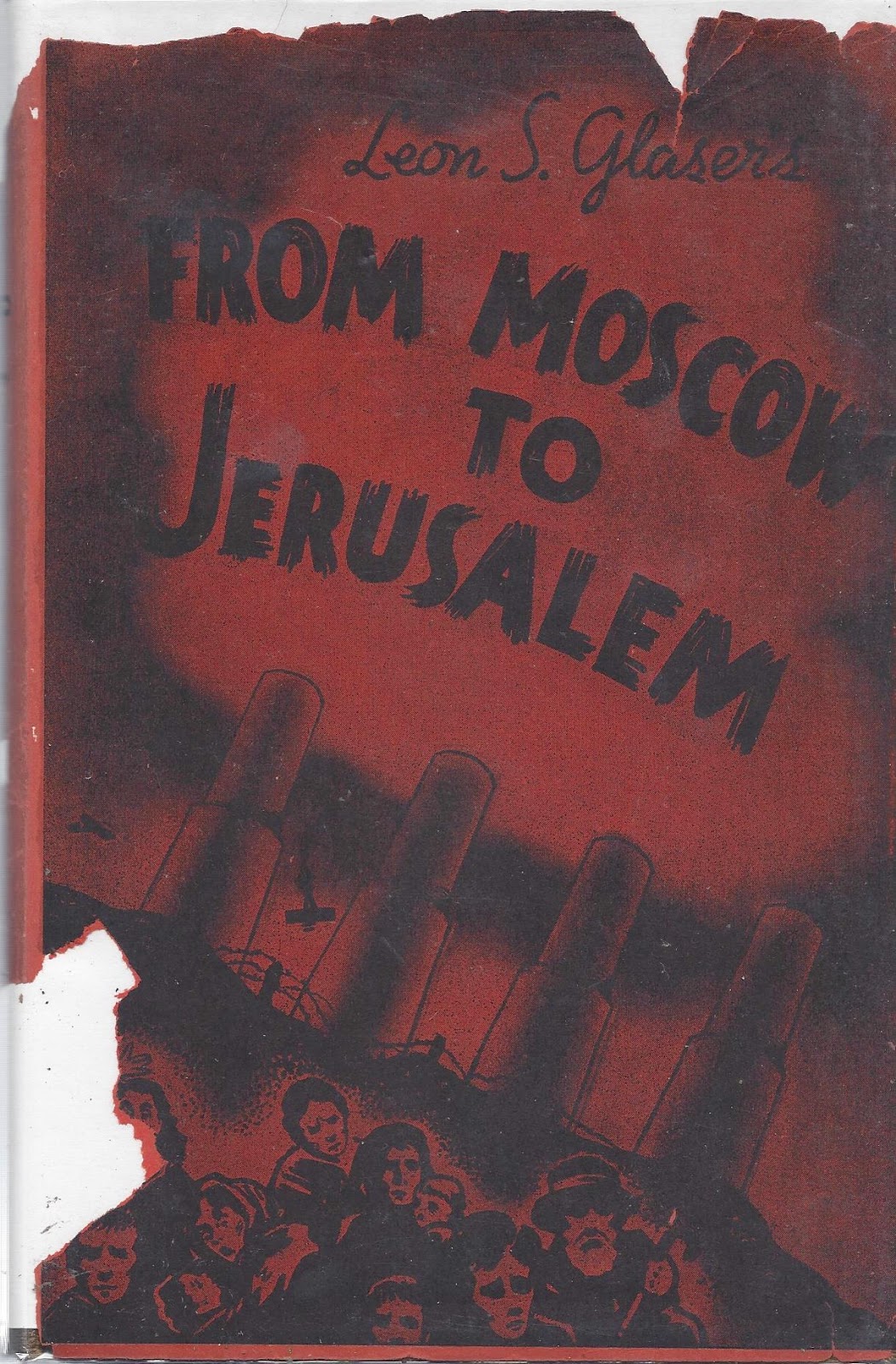 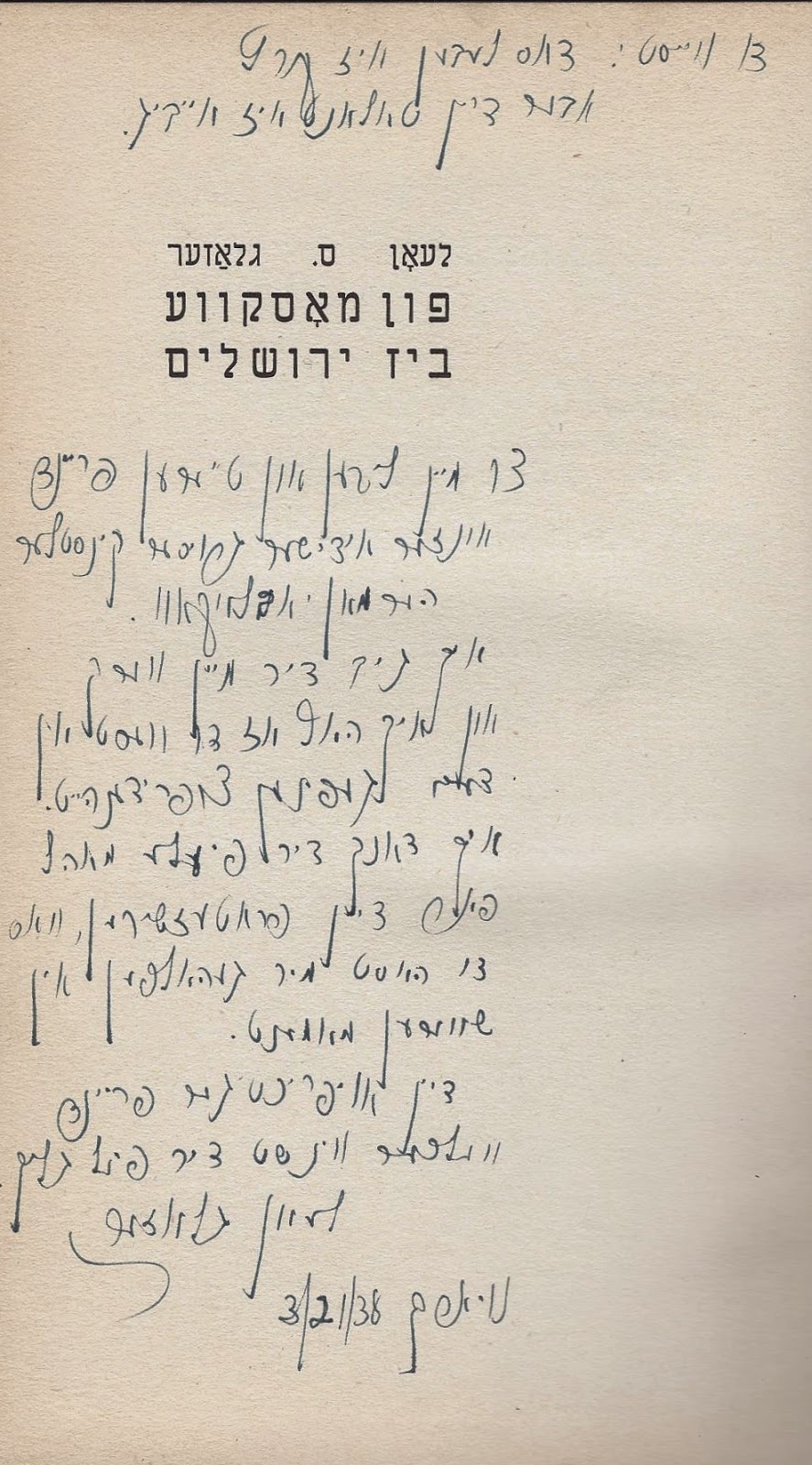 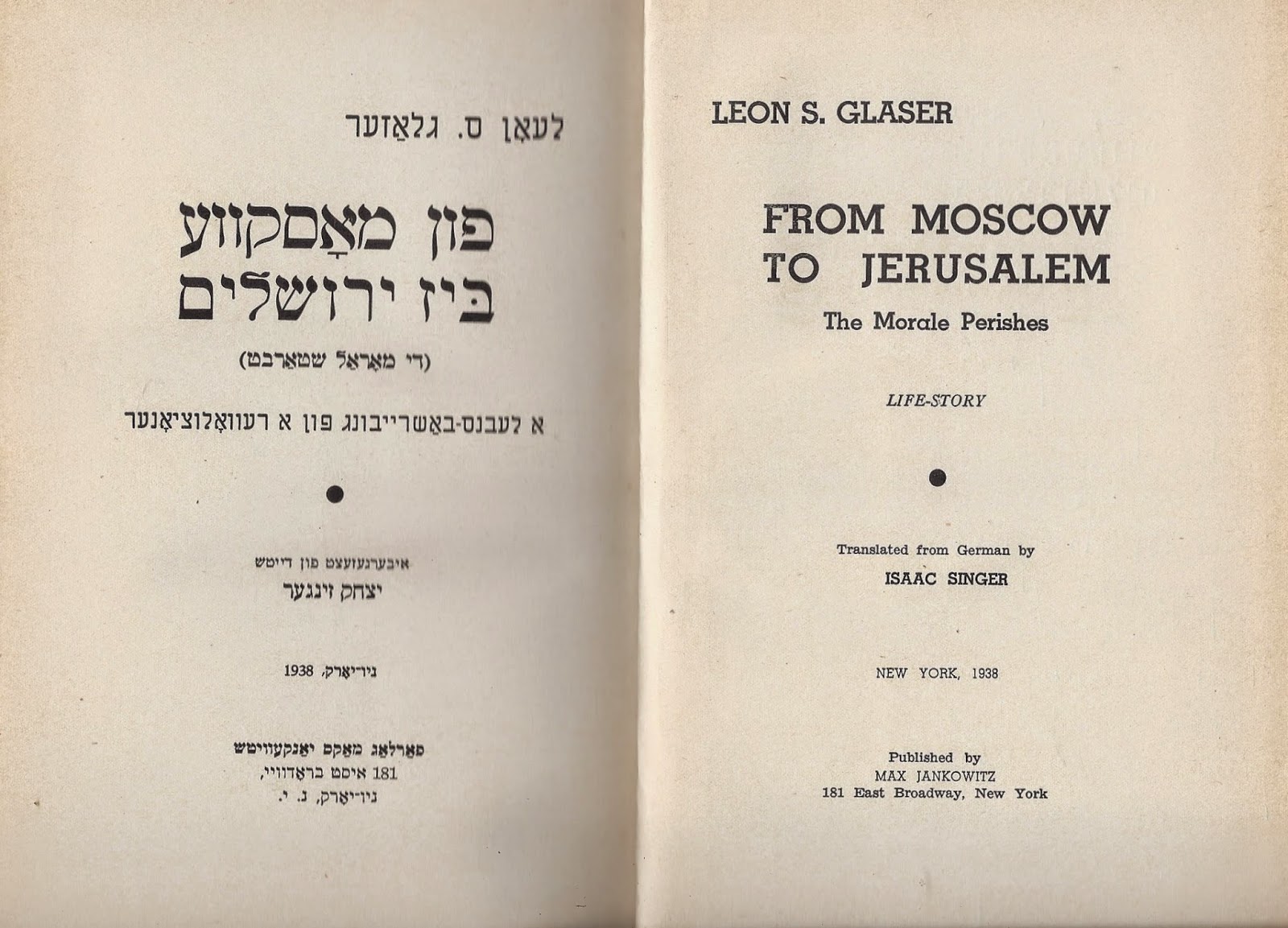 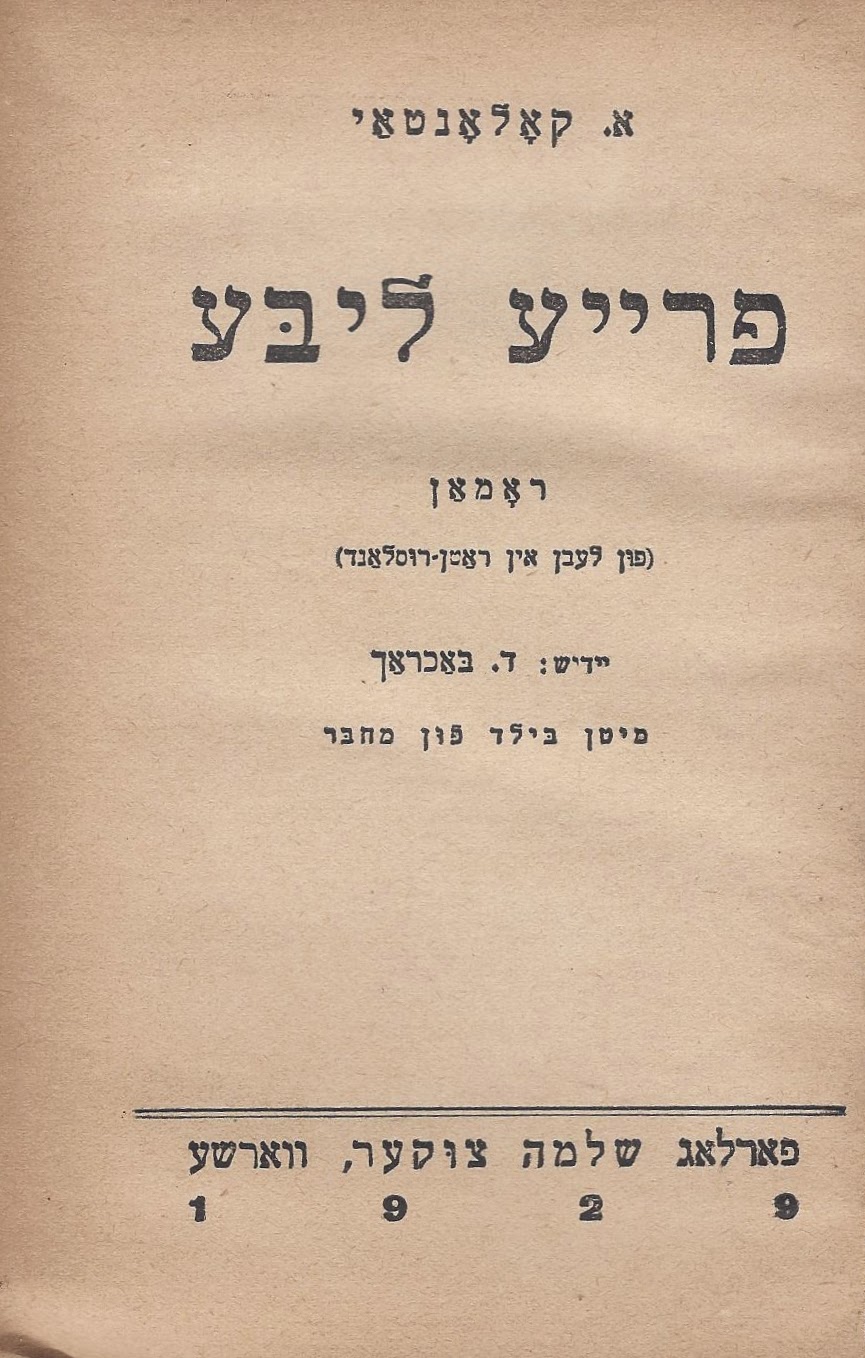 Kollontai, A[lexandra]. Fraye libe: roman (fun lebn in Rotn-Rusland). Warsaw, Farlag Shelomoh Tsuker, 1929. Duodecimo, dustly green cloth with gold lettering (spine lettering faded), frontispiece photo, 238 pp., yellowed paper. Hardbound. Very Good-. Translated into Yiddish from the Russian by D. Bakhrakh. First published in Russian in 1925. Kollentai, once an influential Bolshevik, had by this time been side-lined into Ambassadorial duties. Although she is well known for her prominence as a Bolshevik and a supporter of women's rights she is less well known for her literary efforts. This work appeared in an English translation in 1932. (66560)      $75.00 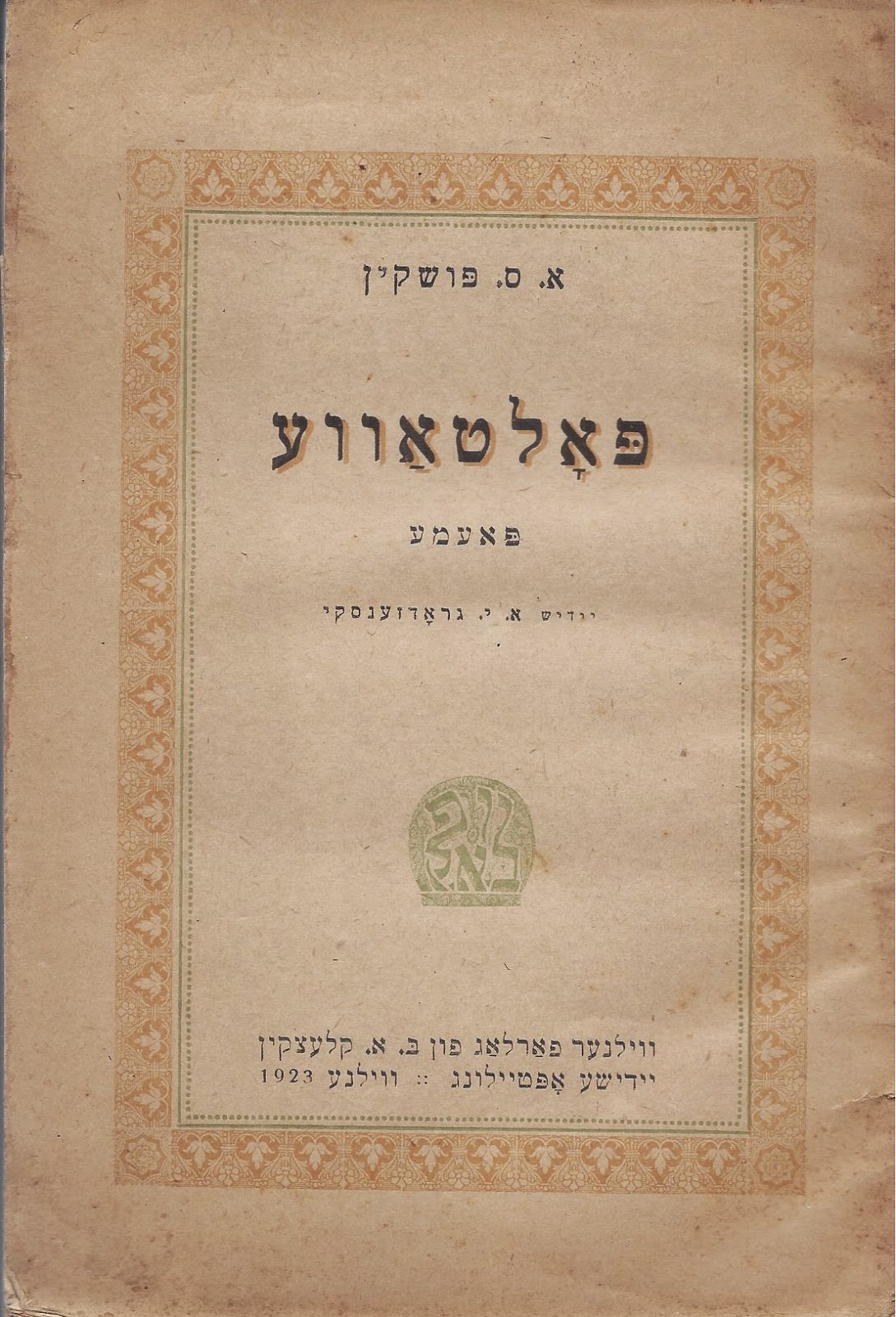 Pushkin, Aleksandr Sergeevich. Poltave: poeme. Vilna, Vilner Farlag fun B.A. Kletskin, 1923. Small octavo, paper covers, soiling to the title page, 71 pp., yellowed paper. Softbound. Very Good-. Translated into Yiddish from the Russian by A. I. Grodzenski. OCLC Number:. 19306306. Many items published in Yiddish are rarely seen in the original condition and binding, yet that is precisely the condition that is most suitable and appealing when a library or museum wants to use their holdings as part of an exhibition (or, if they believe that their collection represents, "a National Bibliography"). (66591)      $50.00 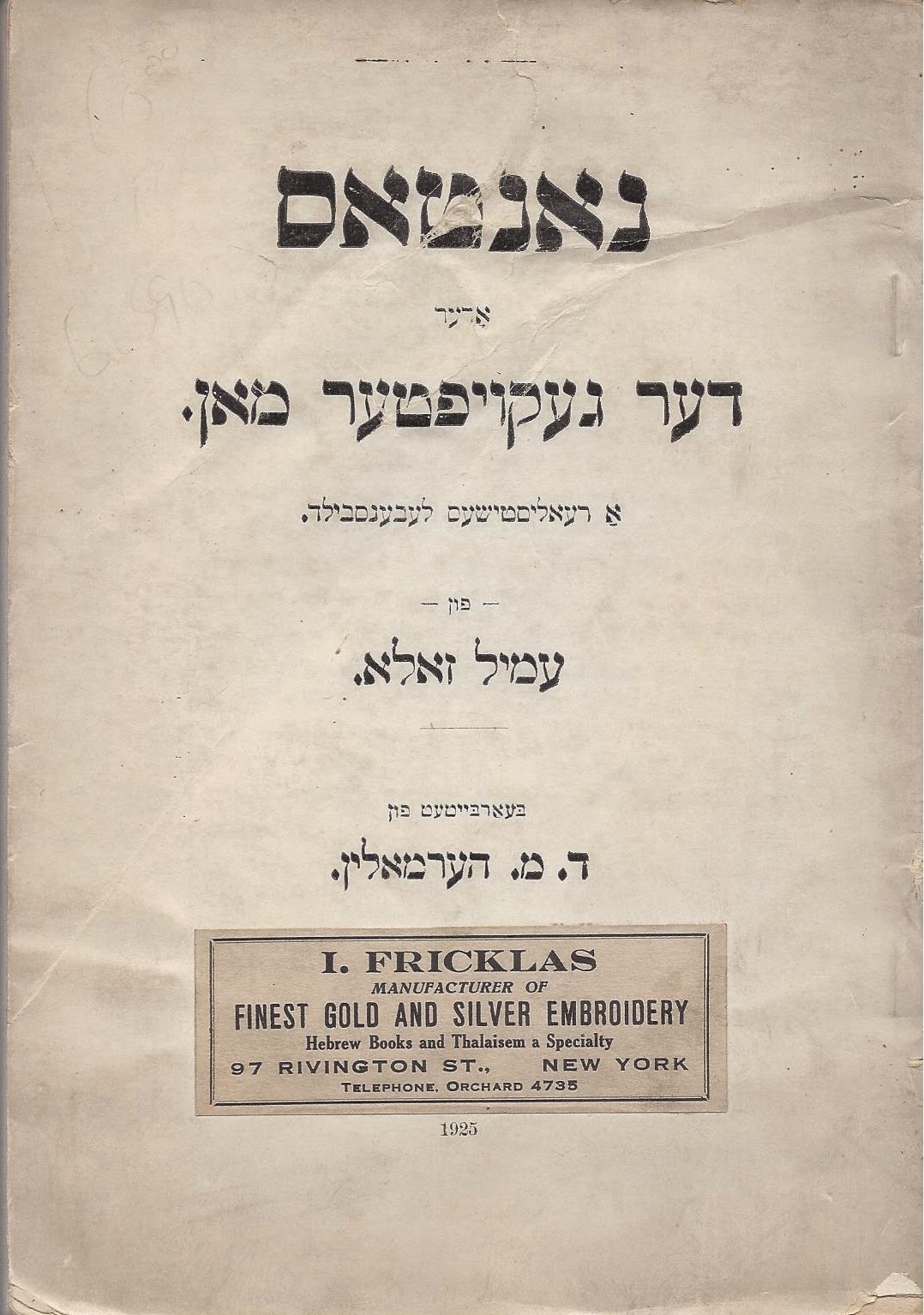 Zola, Emile. Nantas, oder, Der gekoyfter man: a realistishes lebensbild. New York, Hebrew Publishing Co., 1925. Octavo, paper covers with a short tear from the top of the spine, mildly rumpled front cover, 92 pp. Softbound. Good. Translated into Yiddish by D. M. Hermalin. An uncommon title. Zola was a popular author with the Yiddish reading public and this is one of many tiles translated into Yiddish by Hermalin and others in the period before the First World War.
The address and other publication is covered over on the front cover with a booksellers label. Text reads "I. Fricklas/ Manufacturer of/ Finest Gold and Silver Embroidery/ Hebrew Books and Thalaisem a Specialty/ 97 Rivington St., New York/ Telephone, Orchard 4735." Although booksellers are now either pitied, dismissed or reviled they were once vital figures in the dissemination of culture and in the Jewish community of learning. There have been one or two booksellers featured in Yiddish literature. Knowledge of the history of Jewish bookselling is one of the blind-spots in the history of how Jewish culture was spread. Labels like these and even more modest labels are one of the few remaining clues we have to fill in this puzzle. (66590)     $60.00
Posted by Henry Hollander, Bookseller at 9:16 PM