A few Yiddish books with illustrations

A selection of Yiddish books with interesting illustrations. None are particularly rare, but all are interesting and essential.

Cutler, Yosel [Kotler, Yosl]. Muntergang/ Stories and Drawings. New York, Farlag Signal Proletaren, 1934. Tsvayte Oyflage (Koregirt.). Octavo, green cloth with black lettering, mildly soiled printed paper illustration over most of the front board, 192 pp., b/w drawings, glossary, mild soiling to the rear cover. Illustrations by Cutler throughout.  Hardbound. Very Good-. Text is in Yiddish. Cutler and Zuni Meod wrote and did props and backdrops for Maurice Schwartz's Yiddish Art Theater. They also had their own puppet theater for children. This volume is a collection of Proletarian and anti-religious poetry and fiction. The drawings and caricatures are quite sharp. At his best Cutler was a serious competitor for William Gropper. Cutler made Gropper seem like a middle-of-the-roader. A classic of Jewish humor. (562)      $40.00 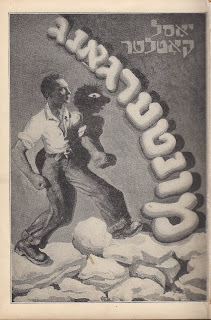 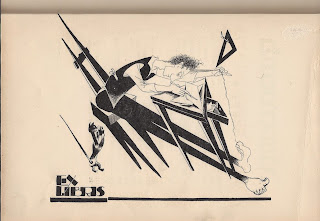 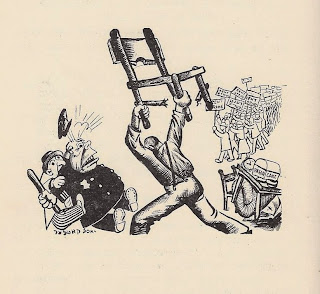 The first illustration appears on the front cover and serves as the title page. The second image is the illustrator's ex-libris. The last is one of the illustrations from the body of the text. I selected this image in particular because of the similarity in subject matter to the sorts of subject matter that Gropper might have taken up for contrast. The central figure is reminiscent of Gropper, but the grotesque policeman uniquely Cutler's.

Magidoff, Jacob. Der shpigel fun der Ist Sayd/ The Mirrors of the East Side. New York, The Author, 1923. Octavo, soiled black cloth with red lettering, front endpaper soiled, 218 pp., b/w drawings by Saul Raskin. Hardbound. Good. Text is in Yiddish.  Magidoff was the editor of the Jewish Morning Journal for over forty years. This self-published work came out at the middle of his lengthy tenure. There are full page drawings of all eighteen Lower East Side political figures profiled here by Saul Raskin. Included are Abe Cahan, Morris Hillquit, Meir London and others of their ilk. Raskin, a now highly under-appreciated American Jewish artist was a powerful influence on the immigrant Jewish community on the first third of the 20th century. This aspect of Raskin's life involved journalist advocacy and very popular walking tours of New York's finer Art Museums. Raskin was a populist and a Zionist. He was very concerned with encouraging Jewish Art which he defined as art with Jewish cultural content. He was opposed by critics who were more interested in aesthetic issues than identity issues. Raskin was very active in journalistic caricature and comic illustrations for humor magazines. He is now largely remembered for his large format illustrated books (Hagada, Ani Ma'amin, Siddur, Pirke Avot, Land of Palestine, Personal Surrealism, etc.) This is an early non-journalistic forum for his art. (12321)      $40.00 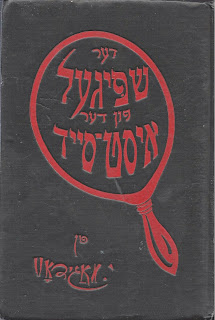 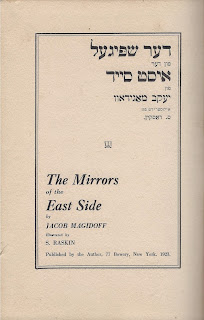 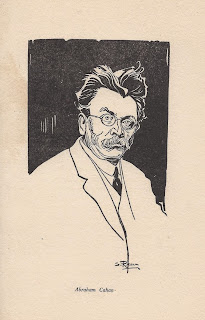 This portrait of Abraham Cahan along with the others in this volume were popular enough to have been issued as postcards.

Raskin, Saul. Erets Yisroel in vort un bild: Indrike fun tsvey rayzes (1921-1924). New York, Reznick, Menshel un Co., 1925. First Edition. Octavo, tan cloth with black lettering, 318 pp., b/w drawings by the author. Chapter headings are also in the author's distinctive graphic style.  Hardbound. Very Good. Text is in Yiddish. Introduction by Reuben Breinin. Raskin's record of his travels to Mandate Palestine. The drawings are quite detailed but still small. It is quite clear that the larger formats that Raskin adopted in his later productions was already in his mind. (66598)      $40.00 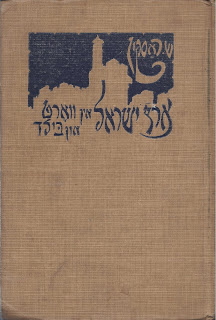 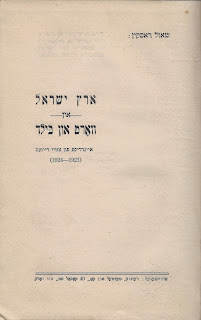 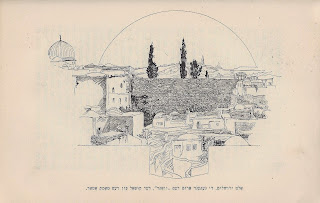 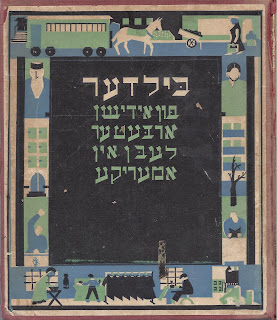 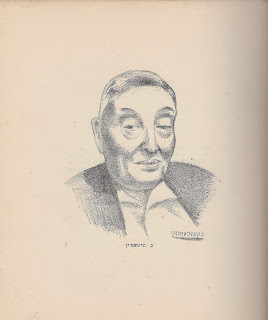 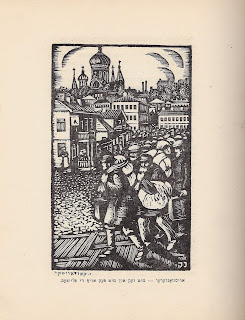 Above, a drawing by Kozlovsky of the author and a selected illustration from the volume captioned, "Oysvanderer -Mit zek un mit pek oyf di Playtses."
Posted by Henry Hollander, Bookseller at 10:47 AM