A few books for Jewish Children.


A few Jewish children's books mostly from the 1920s and 30s in Hebrew and Yiddish. The Twentieth Century brought fantastic and furious innovation in the field of children's publishing. In the 1920s and 30s authors, illustrators and publishers began to take into account the actual interests and preferences of children. The works presented here are either from before this era of innovation or on the cusp of that era. Levin Kipnis, represented by one work below, crossed over into that new era and provided Israeli readers in Hebrew and world readers in Yiddish many many works that appeal to children and adults alike. 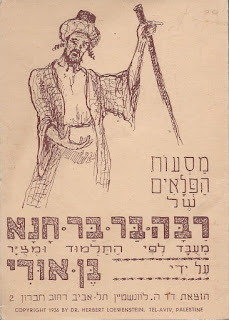 Ben Uri, [Meir]. Masot ha-pela'im shel Rabah bar Bar Hana: meubad lefi ha-Talmud. Tel Aviv, Hotsaat H. Loewenstein, 1936. 16mo, 18 pp. in an accordion fold, drawings throughout by Ben-Uri. Softbound. Very Good. Text is in Hebrew. (77350) Rabbah Bar Bar Hana was a master of Aggadah in Talmud Bavli. He appears in at least a dozen different tractates. His special province as a story teller is the strange journey full of wonders and miracles that help him understand parts of Torah that were difficult for him. This treatment, a dos-a-dos pamphlet with text and illustrations on every page, depicts such a journey.    Sold 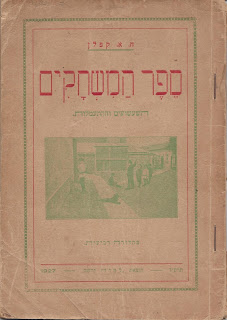 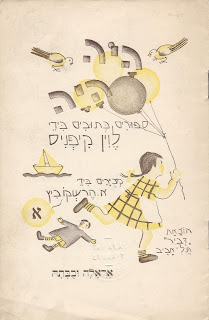 Kipnis, Levin. Hayoh hayah: sipurim ketuvim bi-yede Levin Kipnis Alef. Erelah u-Vubatah. Tel Aviv, Dvir, 1930s. Octavo, stapled paper covers, 8 pp., cover and two drawings by A. Heshkovits. Softbound. Very Good. Text is in Hebrew. (78082)  Levin Kipnis was a major force in Israeli children's literature, primarily in Hebrew. In his later years he turned his attention towards Yiddish and became a major presence with the Yiddishist world. He began writing as a young child. He was mostly closely associated with the publisher Dvir in the mid to late 1920s. He did work with them later and I date this pamphlet to a later period on the basis of the illustration and calligraphy on the cover. This is a pleasant little story of a girl and her doll meant for a younger elementary school reader.   $35.00 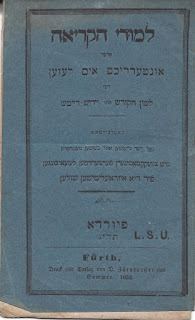 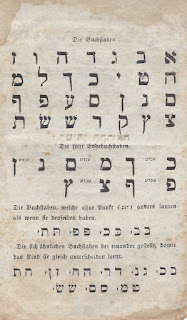 Limude ha-keri'ah = oder, Unterrikht im lezen, dez loshoyn ha-koydesh un Yidish-Daytsh ... fir di izraelitishen shulen. Fürth, Druck und Verlag von D. Zürndorffer und Sommer, 1852. Duodecimo, paper covers, 24 pp. Softbound. Very Good-. Text is in Hebrew and German with a section in Yidish-Taytsh and the special Ivri-Taytsh type. A later printing of the work with the same title dated 1846 under the OCLC number 137242070. (77315)  This is what a children's Hebrew primer looked like in the first half of the nineteenth century.    $50.00 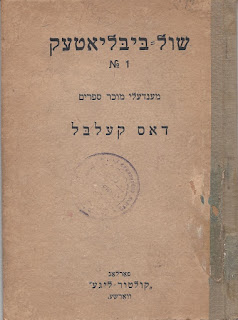 Mendele Mokher Seforim, Sholom Aleykhem, Y. L. Peretz. Shul Bibliotek No. 1. Dos Kelbl. No. 2. Sholom Aleykhem's Dos Meserl. No. 3. Y.L. Perets' Kinder-Lider. Warsaw, Farlag "Kultur-Lige", 1921. 16mo, gray cloth spine with minor wear, printed paper covered boards, soiled covers, first title page loose, 32, 32, 16 pp., yellowed paper, frontispiece illustrations and in-text illustrations throughout the first Mendele story by Joseph Chaikov. Hardbound. Good-. Text is in Yiddish. OCLC Numbers: 38094865, 19309125, 613226955. Three short stories, one each by the three Klassikers of Yiddish literature, meant for school use. The first of the three, "Dos Kelbl," is illustrated by Chaikov. Chaikov along with Boris Aronson and El Lisitsky was one of the founders of Kultur-Lige which is the publisher of all three stories. Chaikov was active as a sculptor already at the time of this publication. Over time his focus turned more towards sculpture particularly after the Soviet turn against the avant garde. (78068) Sold 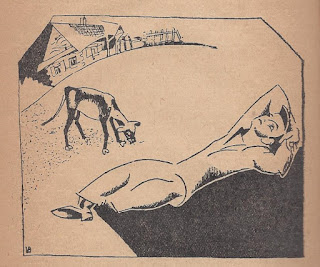 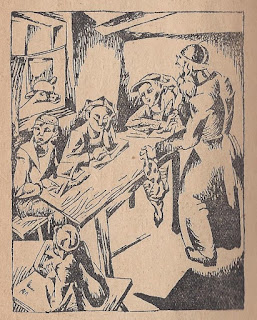 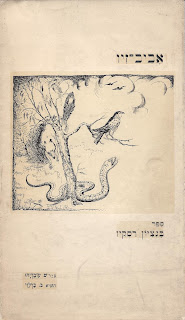