Hungary was one of the most culturally diverse Jewish communities in Europe before the holocaust and one of the largest. Romania also had the diverse area of Transnistria as well as the many small Jewish towns on the Carpathian mountains. Our selections from Hungary and Romania are later than those of the other list of Hebrew imprints. However, these communities certainly had their own flavor and they continued on with consistency until the last moment. 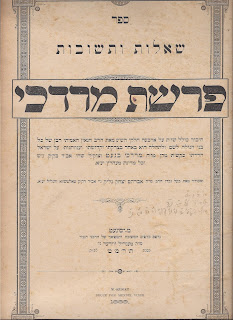 Banet, Mordecai ben Abraham. Sefer She'elot u-teshuvot Parashat Mordekhay ... al 'arba'ah helke ha-sh''a. M.-Sziget, Ba-defus shel M. Vider, 1889. Quarto, rebacked in half calf and with marbled paper covered boards, new endpapers, 270 pp., yellowed paper. Hardbound. Good. Text is in Hebrew. This is the first publication of this volume appearing sixty years after Banet's death. I have not seen him called an illui, but his talents were realized when he was quite young. At his Bar Mitzvah his tutor revealed that Banet had already written three commentaries. He was later appointed chief Rabbi of Nicholsburg and Moravia. Sziget became a prominent location for Hebrew printing starting in the 1870s. The community divided into traditional Orthodox and Hasidic elements. This older work would have been of interest to the traditionalist community. (83522)   $95.00 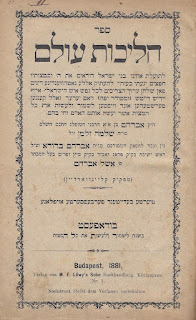 Broda, Abraham ben Solomon Zalman. Sefer Halikhot olam ... dinim fun Shulhan Arukh ... Budapest, Verlag fun M.E. Löwy's Sohn Buchhandlung, 1881. Fierte Bedaytend Ferbesserte Oyflage. Small octavo, soiled blue cloth with gold lettering, fraying at the spine ends, viii, 322 pp. , with a large hand-written note pasted down to the front endpaper. Hardbound. Good. Text is in Yiddish. OCLC Number: 163814766. Uncommon in all editions. The second edition with a very similar title page was published in Ungvar, by Karl Jager in 1866. Broda was a student in the Yeshiva of Rabbi Moses Sofer in Pressburg. He later lived in Kleinwardein. He served the community as a rabbi in Nagyberezna. He died in 1882 certainly making this the last edition of this work published in his lifetime. (83517)     $95.00 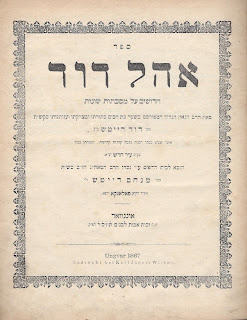 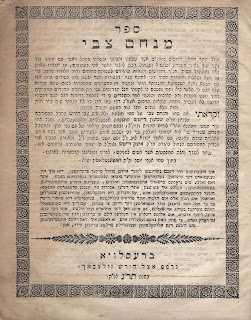 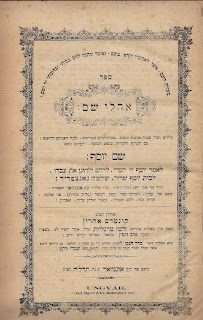 Ganzfried, Solomon ben Joseph and Margolioth, Ephraim Zalman ben Menahem Mannes. Sefer Ohale shem: ... be-shem Shem Yosef and Kuntres Aharon. Ungvar, Nidpas a. y. yorshe Carl Jäger, 1878. Quarto, brown cloth spine with a red label and with mildly worn marbled paper covered boards, boards are completely off, 252 pp., yellowed paper. Hardbound. Fair. Text is in Hebrew. The name Ungvar gave way to Uzhhorod or Uzhgorod in the early 20th century. Ganzfried is another genius. He lived his most of his life in Ungvar. He is, of course, best known for the Kitsur Shulkhan Orekh, one of the most enduring works of 19th century Jewry. (83552)     $30.00 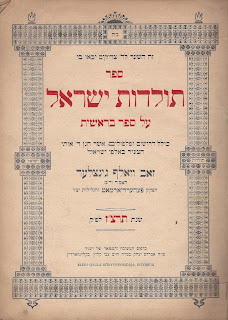 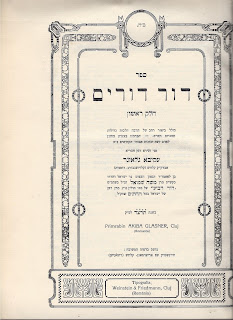 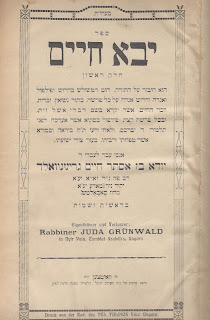 Grünwald, Judah. Sefer Yavo Hayim: derashot al ha-Torah u-filpul ve-agadah ...  Two parts in one. Veitzen, Tel Talpiyot, 1917. Quarto, rebacked in hand-painted paper covered boards, 124, 120 pp.  Hardbound. Very Good. Text is in Hebrew. Sate-Mare was always a Hasidic center, but it had moved in that direction under Grünwald's predecessor there. "In 1897, after the death of chief rabbi Benjamin Farkas Mandelbaum, who had founded the community and held it together since 1849, the community split up. Juda Grünwald, a supporter of the Hasidic movement, was elected chief rabbi. As a result, the opposition split off from the Orthodox community and founded a Status Quo (neither Orthodox nor Neolog) community." YIVO encyclopedia. (83518)      $95.00 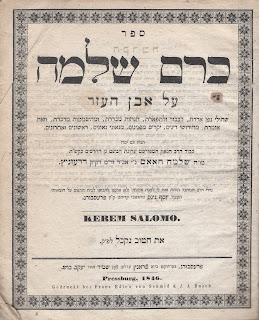 Haas, Solomon ben Jekuthiel. Sefer kerem Shelomoh: al Even ha-ezer ... Pressburg, Gedrukt bay Frants Edlen fon Shmid und Ya'akov Bosh, 1846. Wide octavo, worn brown leather spine with small handmade paper label with the title types, shelf-worn and edgeworn paper covered boards, 58 leaves (116 pp.). with a poem on the subject at the end, "Shir al Even Ha-Ezer." Hardbound. Good. Text is in Hebrew. This was the third of the four parts of Shulkhah Aruch that Haas published commentaries on. "Moravian rabbi of the first half of the nineteenth century. Haas was successively dayyan at Holleschau and rabbi of Strassnitz, Moravia.," Jewish Encyclopedia. He died in 1847. (83556)      $80.00 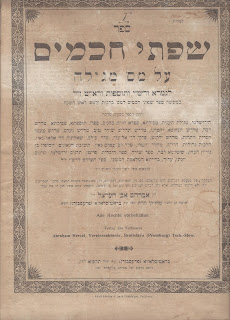 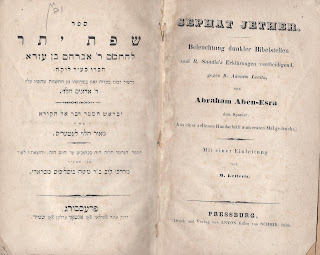 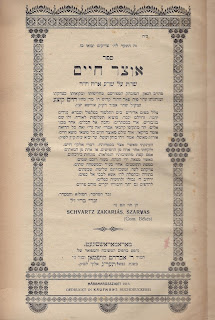 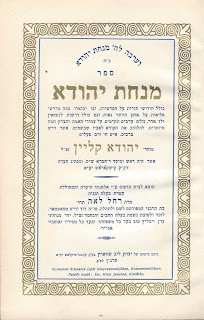 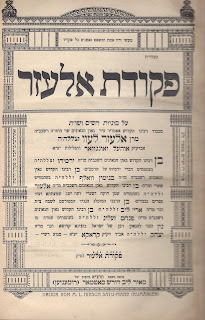 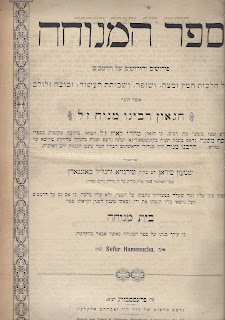 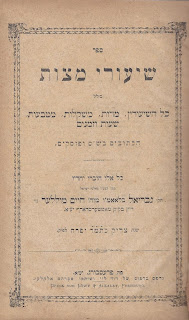 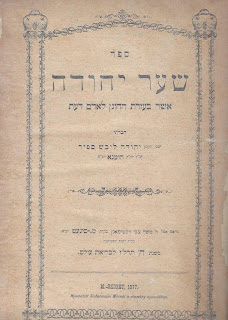 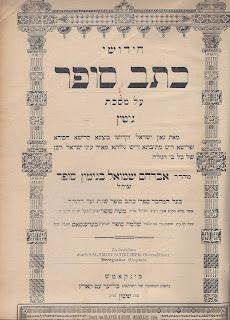 Sofer, [Schreiber] Abraham Samuel Benjamin Wolf. Hidushe ketav sofer al masekhet Gitin. Munkacs, Blayer & Korn, 1896. Quarto, rebacked in half calf and with marbled paper covered boards, new endpapers, iv, 126 pp., yellowed paper. Hardbound. Good. Text is in Hebrew. Abraham Samuel Benjamin was the son of the Chasam Sofer and succeeded him as the Rabbi of Pressberg. He died in 1871. Though published posthumously this was the first edition. The work has been republished many times since. (83524)     $95.00 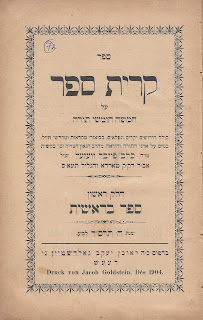 Hundert, Gershon David, edited by. The YIVO Encyclopedia of Jews in Eastern Europe. In Two Volumes. New Haven, Conn., Prepared for publication by the YIVO Institute for Jewish Studies for Yale University Press, 2008.

Vinograd, Yeshayahu. Thesaurus of the Hebrew Book. Jerusalem, The Institute for Computerized Bibliography, 1993.
Posted by Henry Hollander, Bookseller at 12:17 AM