In 1772 the commonwealth of Poland and Lithuania lost its independence and was partitioned into territories of the Russian, Prussian and Austrian empires. Galicia became a province of the Austro-Hungarian Empire. In order to consolidate their censorship regime they consolidated publishing. Zolkiew's publishers were forced to move their operations to Lvov. Despite this benefit to the Hebrew publishing business the partition otherwise was not particularly helpful for the general business climate. Things did improve in time.
Lvov did not attract any of the leaders of the Hasidic movement for more than a few short stays. The movement did not catch on until the 1830s.The Maskilim made inroads into the tradtional community in that same period, though Zeev Gries sees the limited number of editions of the Maskilic titles as evidence of slim interest in their project. A Reform Temple opened in 1844. The government supported the Reform movement, but resistance was fierce and unpleasant.
Printers active in Lemberg in the late 18th and early 19th centuries include W. Letteris, H.D. Madpis, M.H. Grossman and Madpis's granddaughter Judith Mann-Rosanes. Nevertheless, Anton Schmid's highly successful Vienna based Hebrew publishing house put a ceiling on the success of the Lvov printers. 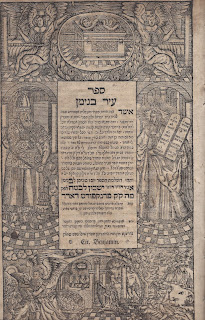 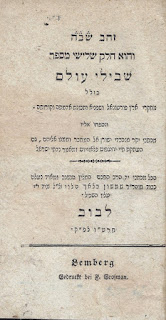 Bloch, Samson , ha-Levi. Zahav she-bah: ve-hu helek shelishi me-sefer Shevile 'olam; kolel mehkere erets Portugal ve-Shpanya u-tekhunat adamatah ve-korotah ... Lvov/ Lemberg, Gedruckt bei F. Grosman, 1855. Duodecimo, olive cloth spine with minor wear at the spine ends, worn paper label on the spine with title in hand-writing, mildly edgeworn marbled paper covers, iv, 104, 16, 48 pp. Hardbound. Very Good. Text is in Hebrew. This is as it states in the title, the third part of "Shevile Olam," meant to be a compendium of geography. "In 1822 appeared the first volume of his important work, "Shebile 'Olam" (Paths of the World), a description of the geography and the nations of Asia (Zolkiev). It still has a literary if not a scientific value on account of its incomparable style and of the attacks on the folly and superstition of the Eastern nations contained therein, which were really intended for fools and deluded people nearer home. The second volume (Africa) is even better than the first, and is interspersed with biographies of Alfasi, Maimonides, and other famous Jews who were born or lived in Africa (Zolkiev, 1827)." Jewish Encyclopedia. This third work is the only part of a larger project on Europe that the author planned and was a posthumous publication. A Haskalah work. (83562)      $195.00 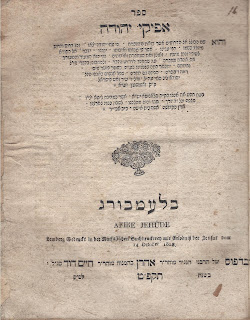 Edil, Yehudah Leyb, ha-Levi. Sefer Afike Yehudah, ve-hu shem ha-kolel el ha-derushim asher be-zot ha-mahberet ... Lemberg, Bi-defus Aharon beha-manoah Hayim David Segal, 1828. Octavo, dried out brown leather spine with cracking and loss to the leather at the spine ends, edgeworn dull purplish paper covered boards, 135 leaves (270 pp.),  a completely new reset edition from preceding editions.  Hardbound. Fair. Text is in Hebrew. The first [posthumous publication of this first of two volumes of sermons published by the author. Edil was a student of the Vilna Gaon. He had a talent for homiletics and this collection has been reprinted a number of times since the author's death in 1827. The Jewish Encyclopedia claims that the second volume of Sermons was not published, but this is incorrect. (83558)     $95.00 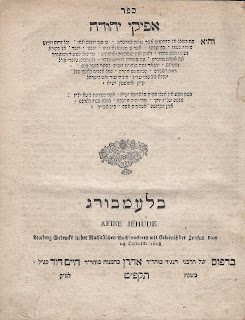 Edil, Yehudah Leyb, ha-Levi. Sefer Afike Yehudah, ve-hu shem ha-kolel el ha-derushim asher be-zot ha-mahberet ... Lemberg, Bi-defus Aharon beha-manoah Hayim David Segal, 1828. Octavo, brown leather spine with cracking to the leather at the spine edges, most of hand-written paper label on the spine, edgeworn dull decorative paper covered boards, 135 leaves (270 pp.),  a completely new reset edition from preceding editions.  Hardbound. Good. Text is in Hebrew. The first [posthumous publication of this first of two volumes of sermons published by the author. Edil was a student of the Vilna Gaon. He had a talent for homiletics and this collection has been reprinted a number of times since the author's death in 1827. The Jewish Encyclopedia claims that the second volume of Sermons was not published, but this is incorrect. (83782)     $150.00 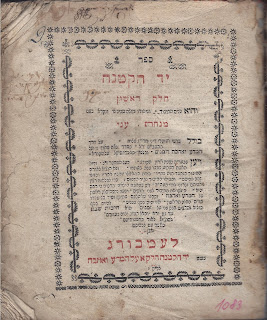 Gotlib, Dov Berish ben Ya'akov. Sefer Yad ha-ketanah : ... u-ve'uro ... Minhat ani, kolel shorshe ve-ikre dine 613 mitsvot al derekh ha-Rambam ... al ha-mada ve-ahavah u-zemanim. Lemberg, 1800. Royal octavo, brown leather spine with a large chip lacking at the base of the spine and another mid-spine, very roughly worn paper covered boards, 363 leaves (726 pp.). free front endpaper soiled and covered with snatches of many Hebraic hands, lacking the rear free endpaper. Hardbound. Fair. Text is in Hebrew. This is the first edition and although "Helek Rishon," is stated on the title page it was the only volume published. It appeared posthumously. The work was not reprinted again until 1856 though it does reappear from time to time. A work on Teshuvah with lessons that are still regularly studied. (83559)     $125.00 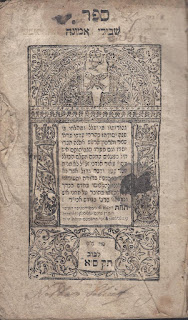 ibn Aldabi, Meir ben Isaac. Shevile emunah: gevurotav mi yemalel ... Lvov, 1801. Duodecimo, remnants of the brown leather spine, boards thoroughly worn with significant loss to the front board, 143 leaves [286 pp.], b/w figures, a few rumpled pages, two partially loose signatures, some old pen lines in the margins. Hardbound. Fair. Text is in Hebrew. A serviceable aged copy of an very interesting title. "Aldabi belonged to the class of popular writers who, possessing extensive theological and scientific knowledge, commented upon the assertions of their predecessors with a clear understanding, expressing here and there their own opinions, and presenting some subjects from the standpoint of the Cabala. Aldabi was also one of those Talmudists whose conception of religion was wholly spiritual and who revered the Cabala: he can not, however, be called a true cabalist. In 1360 he wrote "Shebile Emunah" (The Paths of Faith), an exhaustive treatise on philosophical, scientific, and theological subjects. To judge from the many editions that appeared from time to time, it was for centuries a favorite book with the educated."Shebile Emunah" is divided into ten chapters, which treat respectively of: (1) The existence of God, His attributes, His immateriality, unity, and immutability, which is not affected by prayer or even by miracles—introducing in each case a cabalistic discussion of the names of the Deity; (2) the creation of the world, which does not necessitate any change in God or any plurality in His nature; an explanation of the Biblical account being given, followed by a dissertation on the seven climates or zones of the earth as then conceived, the spheres, the stars, the sun and moon and their eclipses, and on meteorology; (3) human embryology and the generative functions; (4) human anatomy, physiology, and pathology; (5) rules for health and long life; (6) the soul and its functions; (7) the exaltation of the soul, which, through the fulfillment of the Law, becomes one with the Creator—the chapter being devoted chiefly to an explanation of the ethical value of the Mosaic commandments; (8) explanatory notes on the truth of the Law and of oral tradition, elucidating some of the Haggadot on the same lines as Solomon ben Adret; (9) reward and punishment, paradise and hell, immortality of the soul and its transmigration in man; (10) the redemption of Israel, the resurrection, and the world to come after resurrection; a general résumé of the book, followed by a poem." Jewish Encyclopedia. (83573)     $95.00 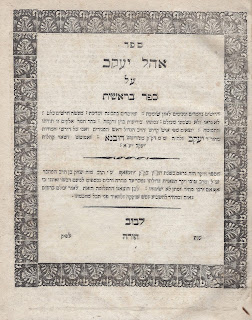 Mohr, Abraham Menahem Mendel. Arugat ha-bosem: kolel divre hakhamim ve-hidotam, ha-mefuzarim al pene ha-Talmud Bavli vi-Yerushalmi u-midrashim, im be'ur ... Lemberg, Joseph Schnayder, 1848. Duodecimo, re-backed in hand-painted paper covered boards, 144 pp. Hardbound. Very Good. Text is in Hebrew. Mohr was a German philanthropist and civic leader. He passed away the year before this volume was published. He wrote a number of other books on travel in Europe and the Holy Land, European royalty as well as a Haggadah and a parody of Megillat Esther. (83786)      $150.00 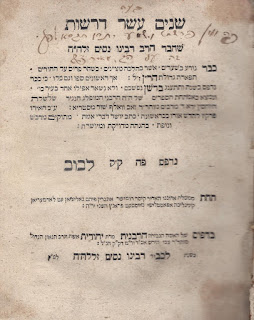 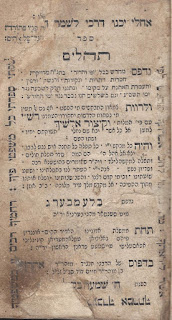 Rashi and Alshikh, with commentary by. Sefer tehilim: nidpas mehdash be-khol yofi be-hagahah meduyeket veba- otiyot gadolot. Lemberg, Aharon Hayim David, 1826. Duodecimo, half brown leather, rough wear to the spine, front board lacks the marbled paper that remains on the rear board, title page chipped at the top open edge and repaired near the base with some loss of text, iii, 404 pp., soiling and with some pen and pencil to the endpaper of early vintage. Hardbound. Good-. Text is in vocalized Hebrew in clear large letters, commentaries are in smaller letter in Rashi script. (83581)     $150.00 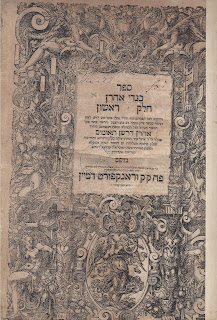 Teomim, Aharon. Sefer Bigde Aharon: helek rishon: derushim ... Frankfurt am Main, Nidpas bay Yohan Kelner, 1710. Quarto, black cloth spine with gold lettering, some cracking along the edges at the ends, marbled paper covered boards, later free endpapers yellowed and cracking, title page reattached some time ago with slight loss to the detail of the sha'ar, 40, 21, 20, 15, 11 leaves [80, 42, 40, 30, 36 pp.] Hardbound. Good. Text is in Hebrew. Gotthard Deutsch who wrote the entry on Teomim for the Jewish Encyclopedia considered Teomim a mediocrity. He has not been as widely republished as some other figures of the era, but his work continues to be of enough interest to stimulate reissues. (83790)     $395.00

Hundert, Gershon David, edited by. The YIVO Encyclopedia of Jews in Eastern Europe. In Two Volumes. New Haven, Conn., Prepared for publication by the YIVO Institute for Jewish Studies for Yale University Press, 2008.
Posted by Henry Hollander, Bookseller at 12:21 AM