A few Yiddish imprints from the teens & twenties

The physical qualities of Yiddish books in the period between 1880 and 1920 are distinct from both Yiddish books published in the earlier and later periods. Content alone makes the materials published after 1880 distinct from the earlier material. A large amount of the material that appeared at this time was issued in small pamphlets often with delicate colored paper covers. We do see some survivors in original wraps but more have survived as a result of bindings that were added. The standards of printing improved over the decade between 1920 and 1930 in both the US and Eastern Europe. Better paper became more widely available and Yiddish orthography curtailed the older preference for Germanic style. Below are a few samples of that era. All are available on the hollanderbooks website. 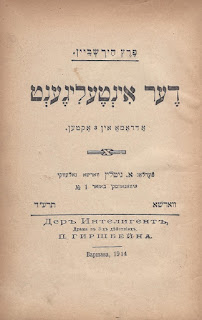 Hirschbein grew up in poverty. He was sent by his family to study and "eat" in the home of sponsors and sleep on the bench in the study house. His first inkling of a world beyond came from the booklets of Shomer, but he accepted the intellectual viewpoint that Hebrew was the language in which proper Jewish literature should be composed. His early works were written in Hebrew and then translated into Yiddish sometimes by others and sometimes by himself. Hirschbein's Hebrew play, Shevarim (Pieces), dealt with the internal frustration and self-defeat of an intellectual, like the author, who fails to connect with "the masses. Der Inteligent is the Yiddish translation of that work. The first editon, which is physically smaller, was published in 1907 by Yavneh. This is the second edition. A last separate edition was published after the First World War.
Hirschbein wrote a large body of plays. As a result of wanderlust that sent him to England, Argentina, the United States, Israel, India and Canada among other places gave his plenty of material for travelogues of which he published a number. In his teens he was associated with the later folklorist Elzet (Zlotnick). He later worked with both Ansky and Bialik. In the theater he worked with Maurice Schwartz and Rudolph Schildkraut among others. He met his wife, the author Esther Shumiachter, on one of his visits to Canada. They had one son. After they had their son Hirschbein and Schumiachter remained in the US for most of the rest of their lives, first on the East Coast and ultimately in Los Angeles where Hirschbein passed away.
Hirschbein was a vital presence in Yiddish theater in his lifetime, but the Yiddish theater dramatically faded away just as Hirschbein's life came to an end. He is now little discussed. If he had written in Russian perhaps his plays would still get performed. His work was translated in several different languages in his lifetime. The Perets Hirshbayn-Bikher-Komitet published a memorial edition of his works in 1951, but relatively few editions of his work appeared after that. $60.00 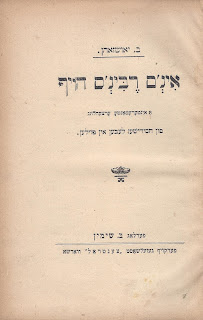 Justman, Moshe Bunem. In'm Reben's hoyf: a interesante ertsehlung: fun Hasidishen leben in Poylen. Warsaw, Farlag B. Shimin, [1914]. Octavo, red cloth with gold lettering, 207 pp., yellowed paper. Hardbound. Very Good. Text is in Yiddish. (83908) The first edition of this work was also published in Warsaw, but three years earlier. Justman's real name was Yushzon and he came from a Hasidic family. He joined the Mizrachi Party and became a very active journalist starting in his late teens. He was only twenty-two when In'm Reben's hoyf was first published. He is best known today for his collection of Yiddish/ Hasidic folkloric materials Fun unzer altn oytser which appeared in Poland in 1932 and later in American and Israeli editions. It is still a popular text among Hasidic readers.  $75.00 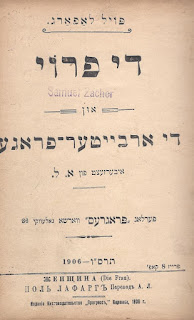 Palimsest texts like this one are not uncommon. They are something that I look for. The bindings of these collections are contemporary with the pamphlets. I have no idea whether these were produced by booksellers, lending libraries, or individuals. This collection is a pretty wide ranging miscellany. Paul Lafargue was a Marxist theorist with the credential of having married Karl Marx's second daughter Laura. Literature is represented by Abraham Reisen and Leonid Andreyev. There are additional pamphlets on Socialism, Feminism and Zionist themes. There is even one dealing with Magnetism and Electricity. These collections can be hard to manage and often the pamphlets after the first one in the volume are masked. (Microfilm reels also have a similar problem.) Some booksellers will break up these collections to sell the pamphlets individually. I find these collections interesting for both what they contain and for the way the different items play off each other.    $150.00 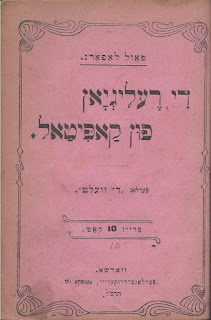 Lafargue, Paul. Di religyon fun kapital. Warsaw, Ferlag "Di Velt", 1906. Duodecimo, black cloth spine with a paper label, worn marbled paper covered boards, original paper covers bound in, 64 pp.  Hardbound. Very Good. Translated into Yiddish by [?]. With a rare bookplate on the inside front cover with the rules for circulation at "Da Hibru Progresiv Laybreri," in Richmond, Virginia. La religion du capital, was first published in 1886 and was translated into a variety of different languages (including this Yiddish edition) during the author's lifetime. Lafargue was the first socialist elected to the French parliament. (83896)     $75.00 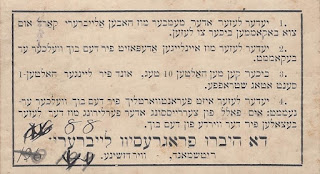 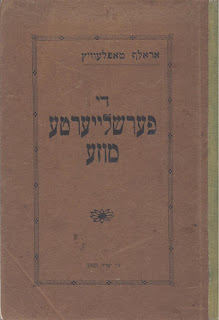 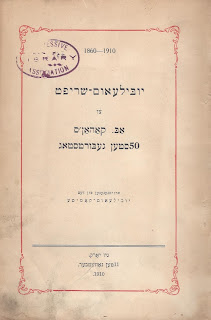 http://yleksikon.blogspot.com (Based on the Leksikon and other Yiddish sources.)

http://www.worldcat.org/
Posted by Henry Hollander, Bookseller at 2:12 AM