For most of a decade I worked on a collection of works by and about women in Yiddish. I amassed one of the best collections of work from the modern period, but I was never able to place it with an institution as I had hoped. Inquiries are welcome. A full printed bibliography with many illustrations is available to any institution with a serious interest. Price and details available upon request.

Below are some interesting items newly acquired and among the less common titles in this area. All are currently available on the Hollander Books website.

Heller, Miriam. Oygn reyd: lider. New York, Farlag "Ramim", 1963. Octavo in dust jacket with wear at the corners and the head of the spine, frontispiece photo, 206 pp., index of first lines. Hardbound. Very Good-. Text is in Yiddish. The author's only book.This item is illustrated in my post on uncommon dust jackets.  (83918)     $45.00 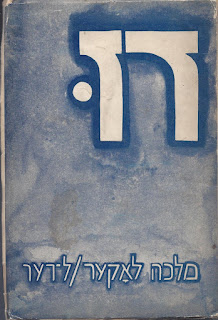 Locker, Malka. Du: lider. Tel Aviv, Farlag "Yam", 1932. Small octavo, paper covers with minor edgewear, 84 pp. Softbound. Very Good. Text is in Yiddish. This was Locker's second book. The first was published the year before in Paris by Editions "Le Triangle." There is an advertisement for that book on the last page of this one. Her husband Berl Locker was a very active Zionist and in 1932 was living in London and working as a member of the board of the Jewish Agency. The choice of Tel Aviv as a place of publication is a bit unusual but probably came out of their Zionist connections. Locker's husband served one term in the mid-1950s in the Knesset. It appears that after independence the Lockers lived in Israel. Malka Locker published a variety of works on major French poets such as Charles Baudelaire and Paul Verlaine in that period. They have been translated into French, English and other languages. The outward looking nature of this project showed an optimism that may have belied a feeling of linguistic displacement in the Yiddish intolerant new Jewish state. (83884)     $50.00 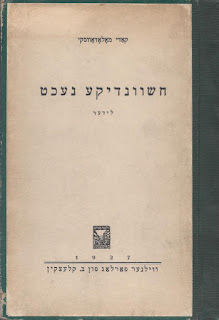 Molodowsky, Kadia. Heshvndike Nekht: Lider [Heshwan`dike necht]. Vilna, Farlag fun B. Kletzkin, 1927. Small octavo, green cloth spine, green paper covered boards with a printed paper panel over the front board, 96 pp., yellowed paper, free front endpaper. Hardbound. Very Good-. Text is in Yiddish. The author's first book. Molodowsky was one of the greatest Yiddish poets in the Modern period. She had a very strong education. Her father taught her Bible and Talmud together with his male students. She lived in Kiev during the early 1920s. Kiev at the time was a cauldron of Yiddish writing and artistic production. Her poetry began to appear in various literary magazines in 1920. After Kiev she moved to Warsaw where she was engaged in circle around the magazine Literarische Bleter which included other talented youngsters like Isaac Bashevis Singer. Heshvandike Nekht was her first book length publication. Right from the beginning Molodowsky brought women's concerns to the forefront in her poetry. (83891)     $95.00 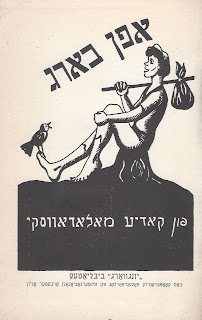 Molodovsky, Kadya [Kadie]. Afn Barg. New York, Yungvarg Bibliotek, bam Kooperativn Folks-Farlag fun Internatsyonaln Arbeter Ordn, 1965. Octavo, green cloth with a paper label on the spine, marbled paper covered boards 72 pp., b/w illustrations by Ruth Israel, Mane Katz and William Gropper. Hardbound. Very Good. Text is in Yiddish. Afn Barg was Molodowsky's first publication in the US. She was a talented writer for children. This collection includes many poems with two line stanzas with end rhymes. All of the poems have multiple stanzas  which was a difference from the style of her poetry for adults. The collections in full of amusing drawings. It was used in the Internationaler Odrn Shuln, the most radically left-wing of all of the secular Yiddish schools. (83894)     $60.00

Rolnik, Mashe [Rolnikayte, M.]. Ikh Muz Dersteyln. Warsaw - Moscow, Yidish Bukh, 1965. Octavo in dust jacket with minor chipping, frontispiece photo, 263 pp., b/w photos. Softbound. Very Good-. Text is in Yiddish. OCLC Number: 41217947.   Rolnik and her family had just recently moved to Vilna as the Nazis overtook Eastern Europe. She suffered in the Ghetto there and later at the Riga-Kaiserwald and Stutthof concentration camps. She kept a diary sometimes on paper but at other times only in her head. She was a song-writer as well but apparently destroyed her manuscripts. This work is the rewritten version of her memoirs from the Holocaust years. She is remembered in an article by Itzik Gottesman on the blog "Yiddish Song of the Week," which includes a recording of her talking about her experiences and includes the text and music associated with a few of her songs. Gottesman indicated that it is possible that a number of songs attributed to "the folk" were actually here compositions. This item is illustrated in my post on uncommon dust jackets. (83924)   $45.00 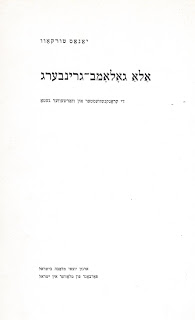 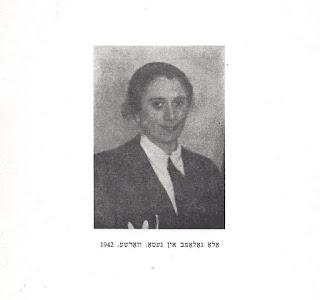 Turkow, Jonas, edited by. Ala Golomb-Grinberg: di kranknshvester in Varshever Geto. Tel Aviv, Irgun yots'e Mlaveh be-Yisrael/ Farband fun Mlaver in Yisroel, 1970. Octavo, tan cloth with black spine lettering and with black lettering in a red lozenge on the front board, frontispiece photo, 90 pp., b/w photos and two pages of illustrated documents. Hardbound. Very Good. Text is in Yiddish. Golomb-Grinberg was the head nurse in the hospital in the Warsaw Ghetto. Turkow was one of the fighters in the Warsaw Ghetto and survived the revolt in the Ghetto. He is the author on many useful account of the Holocaust time many of the published in the series Dos Poylishe Yidntum in Buenos Aires. (83901)     $65.00

Leksikon fun der Nayer Yidisher Literatur. New York, CYCO, 1956-1981. Joshua Fogel has been translating this work and turning it into a searchable resource since 2014. He is also integrating additional information from the later Leksikon fun Yidishe-Shrayers, by Berel Kagan. Kol ha-Kavod

END
Posted by Henry Hollander, Bookseller at 2:36 AM