A brief selection of Children's books for American Yiddish speaking children. Some were created specifically out of the Yiddish Shuln and others were created more independently. A previous post about the artist Todros Geller can be found here. All are currently available at the Hollander Books website. 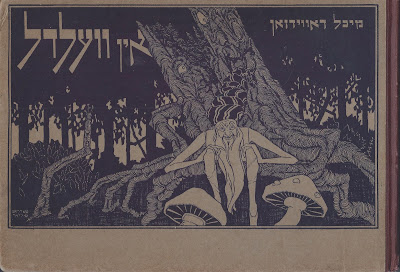 Davidsohn, Michl. In veldl: kinder-drame in tsvey aktn. Chicago, Naye gezelshaft, 1926. Oblong octavo, brown cloth spine, tan paper covered boards with a front cover illustration by Todros Geller, illustrated endpapers, illustrated title-page, 143 pp., b/w drawings. Hardbound. Very Good. Translated from the original Hebrew most likely by the author. Hebrew edition originally published in 1918 also by Naye Gezelshaft. Probably not illustrated by Geller. (83905)
Davidsohn was influenced and mentored by the Hebrew author Judah Steinberg. This was his only illustrated work. He did not work in the secular Yiddish schools. At the time of his death he was teaching at a Yeshiva in the Bensonhurst neighborhood of Brooklyn. Geller's illustrations here are full-throated and ambitious.     $250.00 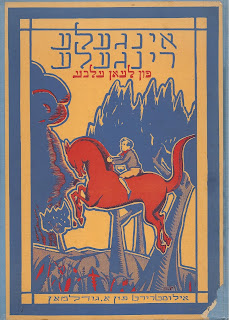 Elbe [Bassein], Leon. Ingele Ringele: Di tshikave Voynderlakhe Geshikhte fun a Ingele mit a Ringole, vos iz oysgeven vo nor a hek, un voz di velt hot an ek. Di Hidushim vos er hot gezen, un alts vos mit im iz geshen. Gut far ale kinder, afilu fargroyse, nit nor far kleyne, vorn di maseh iz alts ayns a shayne/ Yingele Ringele. [New York], Farlag Matones for the Sholom Aleichim Folk Institut, 1929. Third Printing. Royal octavo, blue cloth with blue lettering on the spine and a large pastedown illustration covering the entire from board, 200 pp., a page of photos of Elbe and with full and partial page illustrations by Aaron Godelman. With a modest Yiddish to Yiddish glossary. Hardbound. Very Good. Godelman's modern style is unique but familiar.
Ingele Rigele was originally published serially in the children's magazine of the Sholom Aleichem Folk Institute, "Kinder Zhurnal," with the Godelman illustrations that appear in the book version. Naomi Prawer Kadar discussed this book at length in her recent posthumous publication, "Raising Secular Jews: Yiddish Schools and Their Periodicals for American Children, 1917-1950," pp. 183-187. She points out that the idea of a young boy with a magic ring goes back to the Mendele's story/novella "Dos Vintshfingerl." She viewed this collection as one of the most successful publications coming out of the Yiddish children's magazines at provided quality children's literature that served the interests of the children first as well as meeting the educational goals of the Sholom Aleichem Folk Institut. Elbe was active in the Sholom Aleichem Folk Institut and the National Radical Schools that preceded the Folk Institut. His initial professional occupation was as a journalist with the "Di Varheit." (20859)     $60.00 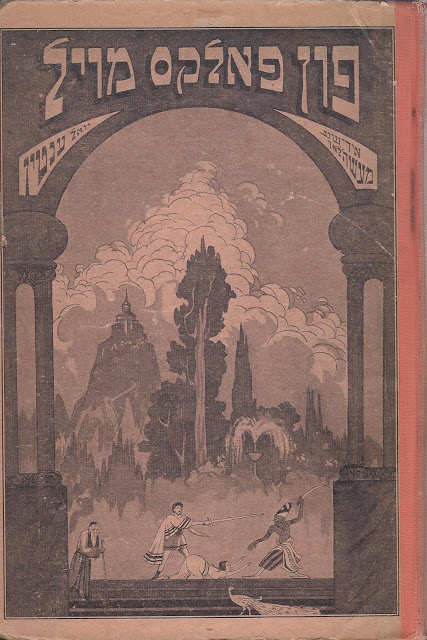 Entin, Joel. Fun folk's moyl: Idishe mayselakh far shul un hoyz; mit optaytshung fun shvere verter un mit bibliografishe notitsen nokh yeder mayse. New York, Hebrew Publishing Company, 1919. Octavo, orange cloth spine with a pastedown illustration on the front cover and a pastedown list of publications on the rear cover, 201 pp. , b/w drawings by Saul Raskin, minor edgewear. With Yiddish to Yiddish notes at the base of each page. Hardbound. Very Good.
Entin was also involved in the National Radical Schools and the stories included in this collection are probably compiled from their magazine, "Di Yidishe Kindervelt." Raskin's work in this volume as well as in the "Di Yidishe Kindervelt." are at a place between his early caricature and cartoon work and his later large scale book works. (397)     $65.00 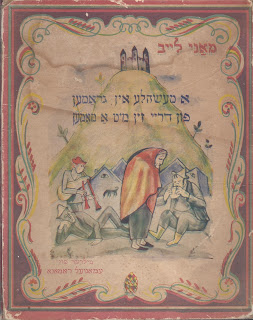 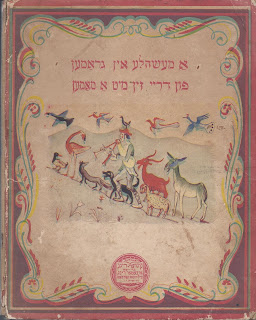 Leib, Mani. A mays´ele in gramen fun dray zin mit a mamen. New York, Ferlag Kinder Ring bay der Arbeter Ring Bildungs Komitet, 1937. Small quarto, illustrated paper covered boards with some soiling and edgewear, soiled endpapers, 44 pp., color plates by Emanuel Romano. Hardbound. Good-
Mani Leib was one of the immigrant generation of poets that turned towards a "literature for Literature's sake" approach in a group - "Di Yunge." His enjoyment of such literary devices as alliteration in particular made him a suitable author for children's literature and he seems to have relished writing for children. El Lisitzy's illustrated version is probably the most internationally famous book ever published for children in Yiddish. This work was published at the height of the depression and was produced at the same time that Romano (Emanuel Glicen Romano or Emanuel Glicenstein) was employed by the Federal Art Project, an off-shoot of the WPA, painting murals. Romano taught art before making aliyah in the early 1950s.  (83926)     $75.00 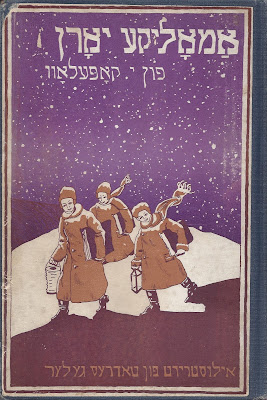 Kopeloff, Isidore. Amolike yorn: iberlebungen fun a Idish ingel in der alter heym. New York, Farlag Matones, 1931. Octavo, blue cloth with white spine lettering, minor wear at the spine ends, illustrated paper panel over the front board, frontispiece photo, 208 pp., b/w illustrations by Todros Geller, a few stray pen marks. Hardbound. Good. Text is in Yiddish. Pen gift inscription opposite the frontispiece photo.
Kopeloff published three volumes of his memoirs for adults. The first two appeared in Europe before this adaptation appeared in the US with Farlag Matones (publisher of the Sholom Aleichem Folk Institut). One more volume of the memoir for adults appeared subsequently in Europe which dealt with his experiences in America after his immigration. Kopeloff was born in 1858 Bobroisk, Lithuania and studies Talmud and Kabbalah in various yeshivot. He later became more involved socialism, anarchism and the labor movement. He was one of the older generation that the creators of the various Yiddish schools hoped to help young children to maintain connections with. Naomi Prawer Kadar does not mention Kopeloff or this work, but she does discuss the figure of the grandfather as a marker of the authenticity of Yiddish culture.
Geller's work in this volume does seem to be adapted for a children and is not as hard edged as his work for adults. There are quite a few capitals with small detailed drawing that practically need a magnifying glass to appreciate.   (83885)     $50.00

Kadar, Naomi Prawer. Raising Secular Jews: Yiddish Schools and Their Periodicals for American Children, 1917-1950. Waltham, Massachusetts, Brandeis University Press, 2017. Foreword by David G. Roskies. (I have a review of this publication in manuscript. Spoiler alert: It is a positive review.)